This is a guide to the Merge Allies feature in Fire Emblem Heroes (FEH). Read on to learn the effects and benefits of Merging duplicate Heroes in the Ally Growth Menu, and the best timing for merging a unit.

Effects and Benefits of Merging Allies

Other Notes about Merging Allies

How to Merge Allies 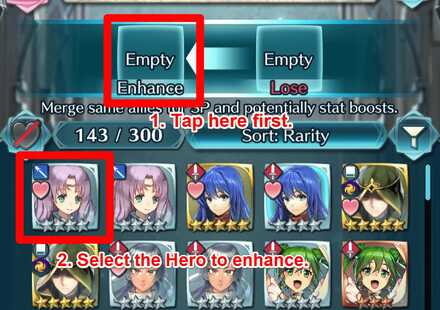 By merging Heroes with the same rarity, at least 2 to 5 stats will be given a +1 enhancement. Merging can be done up to 10 times, where all stat values will be greatly increased.

You can check the Before - After screen just before pressing the Merge button.

Once the Merging is complete, the initial stats will be enhanced

Enhanced stats post-Merging will be in the order of the Hero's highest initial IV. Even for duplicate Heroes, the order in which a stat is enhanced after Merging will increase depends on the difference between the two.

If a Hero has flawed stats, they can receive a +3 or +4 enhancement after the first Merge, and two +1 enhancements for other stats.

This only applies for the first Merge, while succeeding Merges will only increase two types of stats by 1.

In case a character has no flawed stats, the enhancement order upon Merging is:

Merging Allies also grants additional SP for learning skills. The amount gained depends on the rarity of the Merged Hero.

What Happens When You Merge These Units? 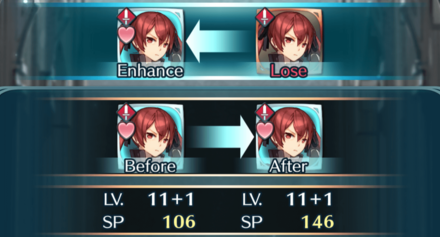 If the Hero used as Merging material has a lower rarity than the original, only SP will increase.

Heroes with the same or higher rarity can give both added stats and SP. 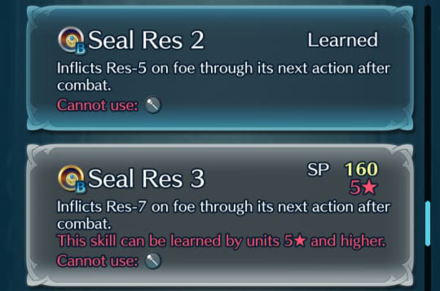 Heroes with acquired Skills can also be used as Merging material. These Skills will be inherited by the target Hero once the Merging is complete.

Any unlearned Skills will be passed on to the character in its unlearned state after Merging.

If the Hero used as Merging material has any Skills inherited from other Heroes, these will also be passed on as well.

When using Merged Heroes as Material

Merged Stats can be Passed On

If you use previously Merged Heroes as material, the stats and any other increases gained will also be passed on to the target Hero to be Merged with.

Extra SP will be Added Accordingly

An additional 120 SP will be gained if the Merging material is a 5-star Hero. Also, if this Merge attempt is beyond the Merge limit, SP will still be added accordingly.

Procedure for Heroes that have exceeded the Merge Limit

The recommended sequence for using previously Merged Heroes as material is as follows:

Merging Heroes in this manner is an efficient way to learn Skills and gain stats quickly. 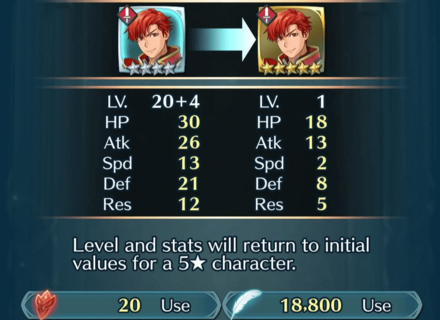 Any Merged stat bonuses and added SP will reset to initial values upon using Unlock Potential to raise a Hero's rarity. However, the cost of using Hero Feathers will be reduced by 300 for each Merge.

For example: When using Unlock Potential on a 4-star Hero, the number of required Feathers is reduced to 18,800 instead.

Should You Merge Units?

When to Merge Heroes

Units Frequently Used in the Arena

While Merging gives at least a +2 on stats and some SP, multiple Merges can make these benefits stack and increase your overall Area rating. It's recommended to Merge 5-star characters if you frequently play the Arena game mode.

Merging a 4-Star Hero to +10 will give them similar stats to a 5-star Hero at +5. Normally, 4-star Heroes will be weaker than a 5-star, but they become considerably stronger at +10. If you don't have much 5-star Heroes, then it's recommended to Merge as much duplicates as you can.

When Not to Merge Heroes

Players who Rarely Battle in The Area

The main beneifit of Merging is for increased Arena ratings. So players who rarely battle in the Arena may not need to use this function as often. Clearing high difficulty maps with Hero battles requires Level 40 characters, so it's recommended to first focus on getting that unit to level 40, afterwards you can think about whether or not to merge them.

If the player needs to get rid of duplicate Heros to clear space, Merging is a viable option. Using Hero Feathers to Unlock Potential prior to Merging can also give better results if the player can spare the Hero Feathers. Take note that building a Hero to their full potential will come before merging as a rule of thumb, but any boost to a unit's power should be seen as a good thing.

Post (0 Comments)
Opinions about an article or post go here.
Opinions about an article or post
We at Game8 thank you for your support.
In order for us to make the best articles possible, share your corrections, opinions, and thoughts about "Merge Allies Guide | How to Merge Units" with us!
When reporting a problem, please be as specific as possible in providing details such as what conditions the problem occurred under and what kind of effects it had.