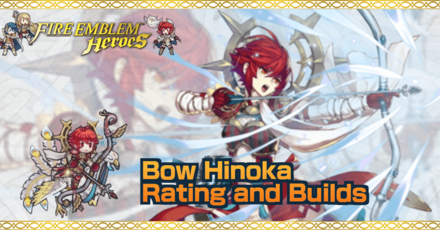 This is a ranking page for the hero Hinoka - Blue Sky Warrior from the game Fire Emblem Heroes (FEH). Read on to learn the best IVs (Individual Values), best builds (Inherit Skill), weapon refinement, stats at Lv 40, and more for Bow Hinoka.

The best IVs for Bow Hinoka are +Atk and -Res. A higher Atk stat allows Hinoka to take out other flying and armored units more effectively. You can also go for a +Spd stat if you prefer scoring or avoiding follow-up attacks. Since she can afford to take some ponts off Res, it is a fitting bane for her as to not harm her Def even more.

A highly mobile support build for Bow Hinoka. iI provides both mobility and firepower to her flying allies. Make sure to get the special effect refine for Warrior Princess to get the most out of the build as it provides her with high range debuffs! Feel free to replace the assist skill or the Sacred Seal with the things you need most as the cornerstone of this build is Warrior Princess, Flier Formation and Flier Guidance.

We recommend the Special Effect Refine for Warrior Princess

It is a straightforward effect that inflicts a debuff on enemies. The debuff greatly improves matchups when using physical units and since it is applied even if Hinoka does not take part in combat, it can be used for supporting allies too!

Combined with the Atk boost from the default effect of Warrior Princess, Flier Formation 3, and Flier Guidance 3, Bow Hinoka can be conveniently ran as a flier support! You would only need to pay for the special effect refine and a get Sacred Seal of choice to make this build work.

Check out The builds for Bow Hinoka, as we have 2 support builds for her if you want to run her that way.

Bow Hinoka is a ranged physical attacker (range = 2). Therefore, when not accounting for the Weapon Triangle, the amount of damage she deals will be equivalent to her Atk minus the foe's Def stat.

Warrior Princess is effective not only against flying units, but also armored units as well! This allows Hinoka to be a great match-up against powerful armored units such as Surtr and Idunn!

It also has a built-in effect similar to Drive Atk! It Grants +3 Atk to allies within 2 spaces during combat. Additionally, it will have access to a powerful debuff if you choose to get the special effect refine. At that point, Bow Hinoka can be run as an effective fighter-support hybrid!

Atk/Spd Bond 3 increases Bow Hinoka's Atk and Spd by +5 if she is adjacent to an ally. Since it is an in-combat buff, it stacks with other combat buffs. This makes Bow Hinoka high-powered, but not susceptible to panics and chills. This, of course, stacks with the Drive Atk effects of Warrior Princess.

Flier Formation 3 allows Bow Hinoka to move to spaces that are adjacent to units 2 squares away. This allows Bow Hinoka to potentially jump from unit to unit and help them through attacking nearby foes or by triggering skills that require an adjacent ally. This skill provides lots of strategic value if you are using at least two other flying units aside from Bow Hinoka.

Combined with Flier Formation 3, Flier Guidance 3 allows Bow Hinoka and all of her allies to bounce around each other while enjoying the benefits of flying movement! This makes Bow Hinoka's presence in an all-flying party very important as she brings ton of mobility into the team.

As a flying unit, Bow Hinoka takes 1.5x damage from bows and weapons effective on flying units. Be sure to keep them out of the range of archers and leave them to other units.
Heroes with Effective Skills

Bow Hinoka's Def only sits at 17 at Lv. 40. This further magnifies her weaknesses to co-bow units. Be wary of counterattacks from physical units! Remember that taking attacks from magical units is a different story as her Res is at a fair 29!

Should you Unlock Potential for Bow Hinoka?

Hinoka - Blue Sky Warrior Only Appears as a 5 Star Hero!

Bow Hinoka as a Source Hero

Bow Hinoka can be used to inherit the skills Atk/Spd Bond 3 and Flier Guidance 3. However, Bow Hinoka is a powerful bow-flier unit that is only available at a 5★ rarity. Please think carefully before fodderring her off.

How to Get Bow Hinoka / Illustrations / Voice Actor / Quotes

How to Get Bow Hinoka

Bow Hinoka is a Hero who can be pulled from any summon.

Register as a member and get all the information you want. (It's free!)
Login
Opinions about an article or post go here.
Opinions about an article or post
We at Game8 thank you for your support.
In order for us to make the best articles possible, share your corrections, opinions, and thoughts about "Bow Hinoka Builds and Best IVs" with us!
When reporting a problem, please be as specific as possible in providing details such as what conditions the problem occurred under and what kind of effects it had.