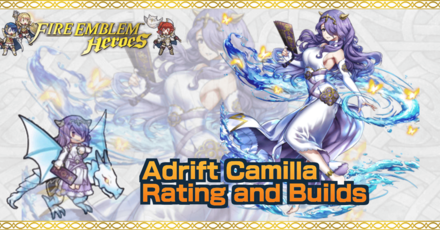 This is a ranking page for the hero Camilla - Flower of Fantasy from the game Fire Emblem Heroes (FEH). Read on to learn the best IVs (Individual Values), best builds (Inherit Skill), weapon refinement, stats at Lv 40, and more for Adrift Camilla.

Our recommended IVs for A!Camilla are +Atk and -HP. With her high Atk and subpar Spd, increasing the mileage she gets off of a single strike will do her the most good. HP is not a top priority for her, so it can safely be taken as a bane.

Inheriting an Atk Wave skill will increase her firepower, and in turn, the amount of enemies she is able to take down. Equip her with an assist skill for additional movement and then have her attack with an adjacent ally to boost her Atk power.

A!Camilla's Exclusive Weapon currently cannot be refined. This section will be updated if it becomes refinable in the future.

A!Camila is a ranged magic attacker (range = 2). Therefore, when not accounting for the Weapon Triangle, the amount of damage she deals will be equivalent to her Atk minus the foe's Res stat.

A!Camilla's exclusive weapon skill, Book of Dreams, will inflict -4 to all stats of a foe when she is adjacent to another ally. Since this is a debuff only active during combat, its effects will stack with those of other Threaten/Ploy type debuff skills.

Gains a buff to Atk/Res with an adjacent ally

With her default skill Atk/Res Link 3, A!Camilla gains a significant Atk/Res buff when she has an ajacent ally. Atk/Res Link is a buff that is active during combat, meaning that its effect will stack even when receiving another buff from a skill such as Hone Fliers. Since it has the same conditions required as her weapon Book of Dreams, A!Camilla essentially gains Atk/Res +9 and Spd/Def +4 in battle when she has an adjacent ally.

With her B slot skill Atk/Res Bond 3, A!Camilla and an ally will gain Atk/Res +6 when an assist skill such as Reposition is used by one of them on the other. Since she already has Draw Back by default, this is a powerful buff that is easy to meet the conditions for.

Weak to weapons that are effective on fliers

As a flying unit, A!Camilla is prone to taking heavy damage from arrows and weapons that are effective on fliers. It is very likely taht she get taken down with just one shot, so make sure to play it safe and stay out of the range of archers.

Should you Unlock Potential for Adrift Camilla?

Camilla - Flower of Fantasy Only Appears as a 5 Star Hero!

Adrift Camilla as a Source Hero

A!Camilla can be used to inherit Atk/Res Link 3. However, as this unit is a very rare one only obtainable at 5-Stars, you should think long and hard about whether or not you are okay with using her as a source hero.

How to Get Adrift Camilla / Illustrations / Voice Actor / Quotes

How to Get Adrift Camilla

Adrift Camilla is a Hero who can be pulled from any summon.

Register as a member and get all the information you want. (It's free!)
Login
Opinions about an article or post go here.
Opinions about an article or post
We at Game8 thank you for your support.
In order for us to make the best articles possible, share your corrections, opinions, and thoughts about "Adrift Camilla Builds and Best IVs" with us!
When reporting a problem, please be as specific as possible in providing details such as what conditions the problem occurred under and what kind of effects it had.