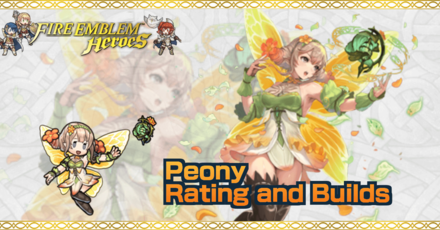 This is a ranking page for the hero Peony - Sweet Dream from the game Fire Emblem Heroes (FEH). Read on to learn the best IVs (Individual Values), best builds (Inherit Skill), weapon refinement, stats at Lv 40, and more for Peony. 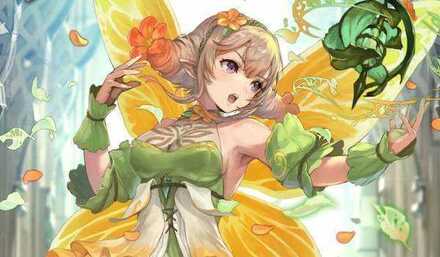 Peony's best IVs are+Spd and -Res. With a Spd boon, her Spd stat reaches 39, allowing her to both avoid follow-up attacks from most enemies while also becoming able to gain many of her own. With a super low Def stat and superbanes in both HP and Def, you should avoid these flaws at any cost, making -Res the ideal bane.

If you are trying to merge Peony to +10, +Spd is the ideal boon. At +10 merges, Peony will have a Spd stat of 43, letting her gain follow-up attacks on even more foes. If you plan on buffing her Spd through other skills or team buffs, etc, +Atk is a good boon as well.

Peony's weapon cannot currently be refined. This section will be updated if it becomes refineable in the future!

Peony is a ranged magic attacker (range = 2). Therefore, when not accounting for the Weapon Triangle, the amount of damage she deals will be equivalent to her Atk minus the foe's Res stat.

As a Mythic Hero, you will receive the item Light Blessing when summoning Peony. In addition, she will grant allies who have been blessed with a Light Blessing HP+5 and Spd+5 when they appear together during Light Season.

Peony's exclsuive skill Gentle Dream buffs an ally while simultaneously granting them another action. Allies who have been granted additional movement, as well as all allies in cardinal directions of both Peony and the ally who gained extra movement, will gain +3 to all stats and be able to move to a space adjacent to any ally within 2 spaces. In addition to being a useful refresher skill, it buffs all allies and grants more mobility, making it one of the best support skills available.

Peony's exclusive weapon Flower of Joy will grant +3 to the Atk/Spd of allies within cardinal directions of her. As long as the ally is in one of her cardinal directions, the amount of spaces away they are does not matter, allowing her to buff all allies from a safe distance. This buff also stacks with the effects of Gentle Dream, so she can grant massive bonuses to all allies while giving them extra movement and mobility.

Can move to an adjacent space of nearby allies

Peony's B skil Wings of Mercy will let her move to an adjacent space of any non-flying unit within two spaces. This skill makes it easy to further the scope of Gentle Dream and Flower of Joy even farther, as well as warp to another ally and refresh their movement. This skill has great synergy with her other support skills.

As a flying unit, Peony will take heavy damage from bows and other skills that are effective on flying units. Make sure you keep her out of the range of any bow wielding units.

Should you Unlock Potential for Peony?

Peony - Sweet Dream Only Appears as a 5 Star Hero!

Peony as a Source Hero

Inheriting B Duel Flying or Aerobatics

Peony has many valuable skills to inherit like B Duel Flying 3 and Aerobatics 3. However, since she is one of the best support units in the game, on top of a Light-Type Mythic Hero, we recommend you raise at least one Peony without foddering her off.

How to Get Peony / Illustrations / Voice Actor / Quotes

How to Get Peony

Peony can be obtained automatically after clearing Book IV - Chapter 1, Part 5. When obtained, they will already be at a 5★ Rarity and have base stats (no IVs).

Peony is a limited time Hero who can be pulled from a Mythic Hero Summoning event. They do not appear in regular summons.

Register as a member and get all the information you want. (It's free!)
Login
Opinions about an article or post go here.
Opinions about an article or post
We at Game8 thank you for your support.
In order for us to make the best articles possible, share your corrections, opinions, and thoughts about "Peony Builds and Best IVs" with us!
When reporting a problem, please be as specific as possible in providing details such as what conditions the problem occurred under and what kind of effects it had.