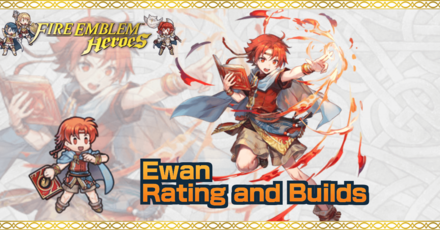 This is a ranking page for the hero Ewan - Eager Student from the game Fire Emblem Heroes (FEH). Read on to learn the best IVs (Individual Values), best builds (Inherit Skill), weapon refinement, stats at Lv 40, and more for Ewan. 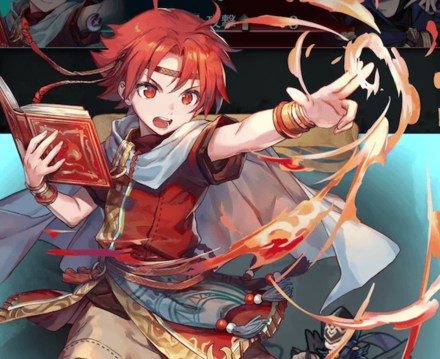 The best IVs for Ewan are +Atk and -Def. A +Atk IV helps him deal more damage to enemies. His mediocre Def stat is of less importance to him and thus it is safe to take Def as a bane.

We recommend a +Spd IV when merging Ewan to +10. With +10 Merges, his Atk stat will reach 54 and pushing it beyond this level is pointless. It would be better if Ewan took a +Spd IV instead to help him trigger more follow-up attacks and make him less susceptible to follow-up attacks. With a +Spd IV at +10 merges, he will reach a decent level of 40 Spd.

Ewan is a ranged magic attacker (range = 2). Therefore, when not accounting for the Weapon Triangle, the amount of damage he deals will be equivalent to his Atk minus the foe's Res stat.

Buff When Attacked by Ranged Foes

Rauðrserpent+ has the same effects as Distant Def 3. This buffs Ewan's defenses whenever he is attacked by ranged units. Since he also has access to Swift Stance 2, he can make for a decent magic tank or at least magic bait that can be used in Aether Raids to lure out defensive units.

Can cast a penalty on foes standing adjacent to eachother

Ewan's B Skill Sabotage Spd will cast a Spd penalty on foes that are adjacent to another foe and have a Res stat that is 3 or lower than Ewan's. This skill works well when foes are grouped together in a map, and will allow Ewan and her allies to score more follow-up attacks.

Ewan's Def only sits at 23 at Lv. 40. Even though she can reduce damage from bows and daggers using his skills, you should still pay attention to melee physical attackers that can easily take down Ewan.

Should you Unlock Potential for Ewan?

Ewan - Eager Student Only Appears as a 5 Star Hero!

Ewan as a Source Hero

Ewan can be used to inherit the skill Rauðrserpent+ and Sabotage Spd 3. Take note that both of these skills are very rare so think carefully on who you are fodderring them into.

How to Get Ewan / Illustrations / Voice Actor / Quotes

How to Get Ewan

Ewan is a Hero who can be pulled from any summon.

Register as a member and get all the information you want. (It's free!)
Login
Opinions about an article or post go here.
Opinions about an article or post
We at Game8 thank you for your support.
In order for us to make the best articles possible, share your corrections, opinions, and thoughts about "Ewan Builds and Best IVs" with us!
When reporting a problem, please be as specific as possible in providing details such as what conditions the problem occurred under and what kind of effects it had.