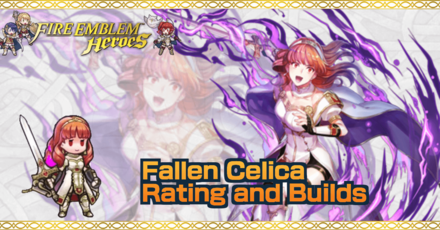 This is a ranking page for the hero Celica - Imprisoned Soul from the game Fire Emblem Heroes (FEH). Read on to learn the best IVs (Individual Values), best builds (Inherit Skill), weapon refinement, stats at Lv 40, and more for Fallen Celica.

We recommend a +Spd IV when merging Fallen Celica to 10. With a +Spd IV, Fallen Celica's Spd stat will reach 42 with 10 merges, which allows Fallen Celica to get more follow-up attacks on her own. If you have access to buffs for Spd, you can go with a +Atk IV instead.

This build requires F!Celica to inherit Swift Sparrow. With the Spd buffs from Beloved Zofia and Swift Sparrow combined, Celica’s default B skill Chill Spd 3 will trigger, letting her gain follow-up attacks against even opponents with a very high Spd stat. Heavy Blade 3 will also be very useful for speeding up her special cooldown and letting her deal more damage to enemies.

With the effects of Fury and Beloved Zofia, F!Celica will gain +7 to all stats in combat when her HP is at 100%. However, be aware that she will take 10 damage afterward. Renewal 3 is used in the B slot to help her easily regain HP, but her default Chill Spd 3 can be useful as well.

We recommend the Special Effect Refine for Beloved Zofia

If Fallen Celica's HP or her foe's HP is 100%, these effects are activated in combat.

This is a very powerful buff that makes Celica a well-rounded unit in the right conditions. It drops the 100% HP requirement for its old +4 to all stats buff and adds another +4 buff. Plus 8 Atk/Spd/Def/Res should not be underestimated.

Fallen Celica is a close physical attacker (range = 1). Therefore, when not accounting for the Weapon Triangle, the amount of damage she deals will be equivalent to her Atk minus the foe's Def stat.

Fallen Celica's weapon, Beloved Zofia, adds +4 to all stats as long as Fallen Celica is at 100% HP. It inflicts damage to her after combat so she does not keep the buff for long. Make sure to pair her up with healers so that she can enjoy the buff at every encounter.

If you choose to specially refine this weapon, she will always have the +4 to all stats plus another stat-boosting effect. You can read more about Beloved Zofia's special refine here!

Chill Spd 3 inflicts -7 Spd on the fastest enemy unit. This is very important as it makes one of the most powerful offensive enemy units in the map less likely to execute follow-up attacks. Another quirk of Chill Spd 3 is that it affects the enemy unit regardless of where Fallen Celica is.

Be warned as it only applies to the unit's next action. If they receive a refresher-assist move, they can enjoy their normal Spd levels again.

Beloved Zofia makes Fallen Celica lose -4 to all stats whenever she is not 100% HP. The sword inflicts damage to her after she attacks so she will not be able to keep this buff as the fight goes on. Make sure to pair her up with healers so she can continuously enjoy Beloved Zofia's buffs. Without this buff, she becomes an average sword unit, however, she still has access to Chill Spd 3 as long as she is alive so she can still contribute alot to your team.

This consequence gets dropped if Beloved Zofia is specially refined. She will always enjoy the +4 to all stats.

Should you Unlock Potential for Fallen Celica?

Celica - Imprisoned Soul Only Appears as a 5 Star Hero!

Fallen Celica as a Source Hero

Fallen Celica can be used to inherit the skill Chill Spd 3. However, the number of units that have access to Chill Spd 3 is quite limited so think carefully to whom you will fodder her off for.

How to Get Fallen Celica / Illustrations / Voice Actor / Quotes

How to Get Fallen Celica

Fallen Celica is a Hero who can be pulled from any summon.

Register as a member and get all the information you want. (It's free!)
Login
Opinions about an article or post go here.
Opinions about an article or post
We at Game8 thank you for your support.
In order for us to make the best articles possible, share your corrections, opinions, and thoughts about "Fallen Celica Builds and Best IVs" with us!
When reporting a problem, please be as specific as possible in providing details such as what conditions the problem occurred under and what kind of effects it had.