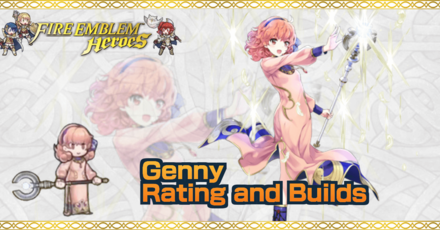 This is a ranking page for the hero Genny - Endearing Ally from the game Fire Emblem Heroes (FEH). Read on to learn the best IVs (Individual Values), best builds (Inherit Skill), weapon refinement, stats at Lv 40, and more for Genny.

This is a build that uses Genny's weapon refine. Atk/Res Solo 4 stacks with her weapon effect while double Savage Blow will not only chip enemy units' HP but will also apply the Gravity effect to them.

We recommend the Special Effect Refine for Springtime Staff

The special effect refine allows Genny to hit harder when kiting, and it grants a built-in effect identical to Breath of Life 3. This allows her to both kite enemies, and heal allies when doing so! Since the Atk/Res buff and the heal can also be activated, you can definitely bait opponents to attack her. Make sure they won't take her out, though! The Res bonus will definitely help in surviving these attacks.

Genny is a ranged magic attacker (range = 2). Therefore, when not accounting for the Weapon Triangle, the amount of damage she deals will be equivalent to her Atk minus the foe's Res stat.

Staff attackers have the drawback of having their attack power halved during combat, but with the default B skill Wrathful Staff 3, Genny is able to deal damage from her staff like normal weapons. This means Genny has the power to play both a support role as well as a long ranged attack role in your party.

Genny's Gravity+ prevents target foe and foes within 1 space of target to 1 sace of movement through their next action. This is applied after Genny attacks said enemy. If combined with Dazzling Staff and a movement-assist skill from an ally such as Draw Back, Genny can continuously kite an enemy while dealing little chunks of damage. This is very useful for setting up kills for your Arena bonus units. You can also go with her default Wrathful Staff 3 to deal more damage, but be wary of units that can counterattack her. Check out our builds for Genny!

Genny's exclusive weapon, Springtime Staff, also has access to 【Gravity】, hits harder than Gravity+, and it has a built-in Dazzling Staff 3 effect that goes well with the mentioned **Wrathful Staff 3!

Genny's staff can be upgraded in the weapon refinery to have a built-in effect. Your 2 choices are either the Wrathful Staff 3 or the Dazzling Staff 3 effects. Since Genny already has the former, it would be very efficient to go for the latter. This will make her not only hit hard, but also safe from the dangers of counterattacks. At this point and with some strategy, she and her allies can definitely tear apart many Arena line ups.

If you have access to Springtime Staff, then you have the option to get her special effect refine. The refine makes her hit hard when kiting opponents, and it heals her allies everytime she exits combat.

Genny has very low Spd. This makes her susceptible to follow-up attacks. Coupled with the fact that she has very low Def, she can be easily taken out by physical units. Please be mindful when using Absorb+ against enemy units that can counterattack her. If you plan to use her in the long run, we recommend getting the weapon upgrade talked about above immediately.

For someone like Genny who sports both Gravity+ and Wrathful Staff 3 by default, it would be perfect if she could inherit powerful offensive skills like Fury 4 or Life and Death 4. Unfortunately, she can not learn these skills for game balance purposes.

Genny - Endearing Ally Only Appears as a 5 Star Hero!

Genny as a Source Hero

Genny can be used to inherit the skill Wrathful Staff 3. Take note that this skill is only available from Genny at 5★ and that is a pretty rare skill. Think carefully on to whom you are fodderring this skill off to.

How to Get Genny / Illustrations / Voice Actor / Quotes

How to Get Genny

Genny is a Hero who can be pulled from any summon.

Register as a member and get all the information you want. (It's free!)
Login
Opinions about an article or post go here.
Opinions about an article or post
We at Game8 thank you for your support.
In order for us to make the best articles possible, share your corrections, opinions, and thoughts about "Genny Builds and Best IVs" with us!
When reporting a problem, please be as specific as possible in providing details such as what conditions the problem occurred under and what kind of effects it had.