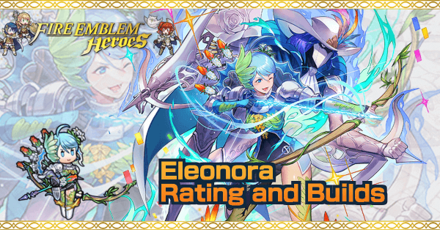 This is a ranking page for the hero Eleonora - Shooting Starlet from the game Fire Emblem Heroes (FEH). Read on to learn the best IVs (Individual Values), best builds (Inherit Skill), weapon refinement, stats at Lv 40, and more for Eleonora. 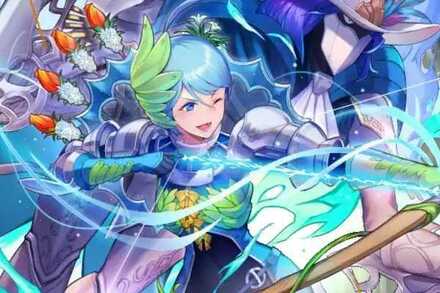 Eleonora's best IVs are +Atk and -HP. With an Atk superboon she will gain Atk+4, allowing her to increase her overall damage output significantly. +Spd is also a +4 superboon, making it a rather useful asset to have as well.

If you are making a +10 Merge of Eleonora, +Atk is the best IV. Eleonora's Atk/Spd Push 4 will already give her a sizeable Spd bonus, so you should turn your attention to the damage per attack instead at that point.

This is an offensive build for Eleonora. The skills here allow her to max out her Atk and Spd stats and effectively wipe out enemies in player phase. Atk/Spd Push will inflict self damage, allowing Brazen to trigger much more easily.

This is a base build for Eleonora. Mirage Longbow prevents counterattacks, and double Savage Breath allows her to constantly inflict 14 units of fixed damage. Rally and Ruse skills allow for support of other allies, allowing you to use her differently depending on the situation.

Eleonora is a ranged physical attacker (range = 2). Therefore, when not accounting for the Weapon Triangle, the amount of damage she deals will be equivalent to her Atk minus the foe's Def stat.

Prevents enemy counterattacks when Spd is greater than the foe's

Eleonora's exclusive weapon skill Mirage Longbow will give her Spd+3 and make it so that if her Spd stat exceeds that of the foe, the foe cannot counterattack. So long as her Spd stat is high enough, she can prevent a counterattack from both ranged foes and those with Distant Counter, allowing her to safely pick off foes without risk of getting wiped out in a counterattack. Since her skillset primarily revolves around maxing out her Spd, the condition is one that is easy to trigger.

Eleonora has the A slot skill Atk/Spd Push 4, which grants Atk/Spd+7 so long as her HP is at or above 25%. It will inflict damage on Eleonora after battle, but considering she rarely gets counterattacked anyway, this large buff is worth it.

Casts bonuses to allies while inflicting penalties on foes

With her assist skill Rally Atk/Spd+, Eleonora can grant Atk/Spd+6 to her allies. Additionally, her B slot skill Spd/Def Ruse 3 will inflict Spd/Def-5 on foes in all cardinal directions of an ally who uses or receives a Rally Assist. With the combined effects of Rally Atk/Spd+ on an ally and Spd/Def Ruse 3 on a foe, an ally will be able to gain a follow-up attack on a foe even if their Spd was initially 6 points higher.

Will be counterattacked by speedier units

Although Eleonora has high Spd and usually does not get counterattacked, that does not mean it is impossible for her to be countered. If a foe with higher Spd comes along, such as one who has received bonuses from their allies, they may be able to counterattack, so be sure and keep an eye on your foes' Spd stats.

Mirage Longbow's ability to prevent counterattacks is quite powerful, but if a foe comes along with Null C-Disrupt, they can turn the tables on her and counterattack. In particular, when using her in Aether Raids, be sure and check your foes' skills beforehand.

Eleonora - Shooting Starlet Only Appears as a 5 Star Hero!

Eleonora as a Source Hero

You can use Eleonora to inherit the skill Atk/Spd Push 4. However, as Eleonora is a rather powerful unit when leveled up and built, so you should think hard about whether or not you want to fodder her off.


How to Get Eleonora / Illustrations / Voice Actor / Quotes

How to Get Eleonora

Eleonora is a Hero who can be pulled from any summon.

Register as a member and get all the information you want. (It's free!)
Login
Opinions about an article or post go here.
Opinions about an article or post
We at Game8 thank you for your support.
In order for us to make the best articles possible, share your corrections, opinions, and thoughts about "Eleonora Builds and Best IVs" with us!
When reporting a problem, please be as specific as possible in providing details such as what conditions the problem occurred under and what kind of effects it had.