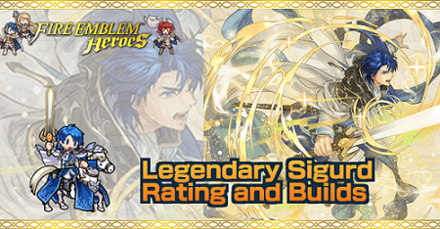 This is a ranking page for the hero Sigurd - Fated Holy Knight from the game Fire Emblem Heroes (FEH). Read on to learn the best IVs (Individual Values), best builds (Inherit Skill), weapon refinement, stats at Lv 40, and more for Legendary Sigurd.

The best IVs for Legendary Sigurd are +Atk and -Spd. One of Legendary Sigurd's main strengths lies in his ability to attack twice with Hallowed Tyrfing, so even a small change to his Atk stat greatly changes his overall ability. As long as he has +Atk, his bane is not really of much significance, but most of the time, Res is his best bane.

We recommend a +Atk IV when merging Legendary Sigurd to 10. This is for the same reasons above. With a higher Atk stat, he will be able to deal large amounts of damage with Hallowed Tyrfing's guaranteed follow-up attack.

A higher budget build for Sigurd to be able to tank any units using Brave Weapons and counterattack with Distant Counter.

A simple budget build for Sigurd. Quickened Pulse allows you to activate Holy-Knight Aura in the first turn.

Legendary Sigurd is a close physical attacker (range = 1). Therefore, when not accounting for the Weapon Triangle, the amount of damage she deals will be equivalent to his Atk minus the foe's Def stat.

As a Legendary Hero, you will gain a Wind Blessing when summoning L!Sigurd. Additionally, being a Wind type Legendary Hero means that during Wind Seasons, other allies with a Wind Blessing will receive HP+3 when they appear in battle with Legendary Sigurd, and his total stats will be treated as 175. This will lead to a higher Arena Score.

Catch skills recently debuted, and the 4th Lvl. variants are pretty powerful. It checks for the following trigger conditions:

The former condition can be easily met especially in the starting turns of combat and the latter can easily be achieved thanks to Fatal Smoke's Deep Wounds effect. Together, they make Legendary Sigurd very powerful in-combat.

This skill is a massive game changer, as he not only prevents enemy units from healing during and after combat, but he also inflicts【Deep Wounds】on his target and foes within 2 spaces.

This means that units that have sustain Specials like Aether, Sol, or anything similar cannot heal themselves even if they engaged combat.

This also means that healers cannot bring their allies' HP pools back up and neither will the Healing Tower heal units on Aether Raids.

If you can, prioritize Legendary Sigurd's targets to make the most out of his power.

It also accelerates his Special trigger and provides damage redcution effects discussed below.

Huge damage reduction from ranged foes thanks to Hallowed Tyrfing and Crusader's Ward! 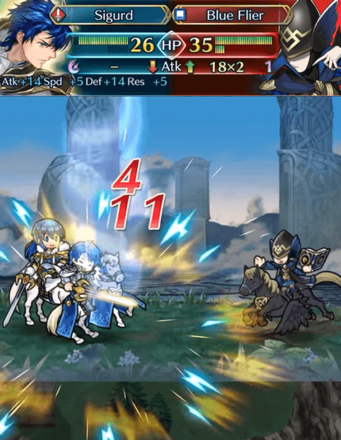 Even if you are using a blue unit, it's going to be extremely hard to punch through that much reduction.

Legendary Sigurd's damage reduction illustrated above. The stat gap discussed above can also be seen here.

Sigurd's Special allows him to move 1 extra space during the start of the turn. This is insane, as it effectively makes him able to cross the map very quickly.

In addition to that, if his Special does trigger, he grants himself and his allies the ability to move 1 extra space on that turn.

This will apply even if Sigurd himself is defeated in battle!

It also grants +6 to Sigurd and all allies in the turn where it activated. It has a very low cooldown of 1 counter thanks to Hallowed Tyrfing so make sure to take advantage every time!

Since L!Sigurd relies on Hallowed Tyrfing's effects to nail follow-up attacks instead of his Spd, he is countered by Null Follow-Up 3, and similar skills.

Sigurd's Spd is very low so he is easily countered by skills that reduce damage through Spd checks. Sigurd will almost always be outsped by units using these skills so his daame will take quite a dive against said units.

As a cavalry unit, Sigurd will take massive damage from weapons like Ridersbane which are effective on cavalry units. Be sure and check your foes' weapons beforehand.

All Heroes with Effective Skills

Legendary Sigurd can fit in a wide variety of teams as he can mostly take care of himself.

He can be paired with those that can boost his firepower even more, like Legendary Eliwood's Bonus Doubler effect on his Ardent Durandal or any of the dancers above.

As a cavalry unit, Legendary Sigurd is weak to weapons that are effective against cavalry as he takes 1.5x more damage.

Due to his low Res, Legendary Sigurd will struggle against high power mages (that don't have Brave effects, sorry Reinhardt), especially if their weapons are cavalry-effective.

You may need to use a dancer to finish him off, but not having a brave weapon means that Crusader's Ward will not be active, which lowers his survivability.

Highly invested blue tanks can take hits from Legendary Sigurd and will possibly one-shot him on their own counterattack.

The hindrance would be that they can't rely on any healing Specials due to Sigurd having Fatal Smoke 3, so if you are using a tank, they will need to either defeat him when he attacks or the first turn of Player Phase.

Sigurd - Fated Holy Knight Only Appears as a 5 Star Hero!

Legendary Sigurd as a Source Hero

Legendary Sigurd can be used to inherit the skills Fatal Smoke 3 or Atk/Def Catch 4. However, Legendary Sigurd is a very POWERFUL Legendary hero that can lead your team in the Arena. Please think carefully before fodderring him off.

We recommend getting at least 1 copy of L!Sigurd before fodderring off copies.

How to Get Legendary Sigurd / Illustrations / Voice Actor / Quotes

How to Get Legendary Sigurd

Legendary Sigurd is a limited time Hero who can be pulled from a Legendary Hero Summoning event. They do not appear in regular summons.

Register as a member and get all the information you want. (It's free!)
Login
Opinions about an article or post go here.
Opinions about an article or post
We at Game8 thank you for your support.
In order for us to make the best articles possible, share your corrections, opinions, and thoughts about "Legendary Sigurd Builds and Best IVs" with us!
When reporting a problem, please be as specific as possible in providing details such as what conditions the problem occurred under and what kind of effects it had.