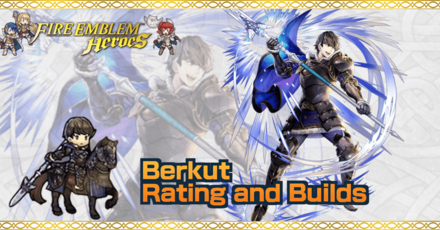 This is a ranking page for the hero Berkut - Prideful Prince from the game Fire Emblem Heroes (FEH). Read on to learn the best IVs (Individual Values), best builds (Inherit Skill), weapon refinement, stats at Lv 40, and more for Berkut.

Note: Berkut's stats will always have no IVs.

As a hero obtainable only through Grand Hero Battle, Berkut has no access to IVs. This means that this unit will always have base stats when obtained, with no flaws or assets.

This is a set based around Distant Counter and Quick Riposte 3. Giving him the +Res refinement for Berkut’s Lance, alongside Distant Def 3 will increase his stats to 37 Def and 41 Res when the foe initiates combat. That Defense stat increases to 43 on even numbered turns, letting him tank many attacks. Giving him the skill Quick Riposte to compensate for his low Spd stat allows him to work as an attack phase unit as well.

This build assumes you will refine Berkut’s Lance+. He will gain Res+10 when a close range foe initiates combat, making him very powerful against breath users. If you give him the +Res refinement, his base Res increases by +4, so he will have a whopping 47 Res when taking an attack, meaning he can greatly reduce the power of manakete foes.

This build is based around inheriting a Brave Lance. Death Blow 3 will help make up for his low Mt. Due to his low Def and Spd, you will mainly want him to move around allies with Reposition, and Drag Back foes so that someone else can finish them off.

We recommend the Special Effect Refine for Dark Royal Spear

It is a built-in Lull Atk/Def 3 that allows Berkut to deal damage and receive less damage from a weakened foe. It does not change his playstyle from using Berkut's Lance+ so we strongly recommend getting this special refine.

Berkut is a close ranged physical attacker (range = 1). Therefore, when not accounting for the Weapon Triangle, the amount of damage he deals will be equivalent to his Atk minus the foe's Def stat. In addition, he has skills that give him stat bonuses when the foe initiates combat, as well as a cavalry-exclusive buff.

Berkut's default weapon skill Berkut's Lance will grant him Res+4 when an opponent initiates combat. By upgrading this weapon through the Weapon Refinery, he will gain Res+4 on top of the Res+7 gained when a foe initiates combat.

You can also opt for the more powerful Dark Royal Spear provides an Atk and Def bonus on top of a Res bonus! It also has a special refine which you can read more about here!

Berkut's C slot skill Ward Cavalry will grant an additional Def/Res+4 to cavalry units within 2 spaces during combat. Unlike Hone/Fortify skills, Spur/Drive/Ward buffs will stack, so you can get the most out of all your units equipped with these skills.

Berkut's default special Blazing Flame deals damage to multiple enemies near the target before combat. Weakening your opponent before going into combat is a useful tactic, but if the foe has Vantage, this special may cause it to trigger during battle, so make sure to note which skills your opponent has.

Berkut's low Spd means he will almost always have to endure follow-up attacks. If you want to get the most out of this unit, you will want to boost his defensive stats so he can tank many attacks, give him a Brave Lance or Breaker skill, etc.

Should you Unlock Potential for Berkut?

We Do Not Recommend Unlocking Potential for Berkut - Prideful Prince!

Berkut as a Source Hero

You may wish to use Berkut to inherit Berkut's Lance+. However, Berkut is not obtainable thorugh normal summons, so his supply is limited. Think hard before foddering him off.

How to Get Berkut / Illustrations / Voice Actor / Quotes

How to Get Berkut

Berkut is a Hero who, for a limited time, can be obtained through completing a Grand Hero Battle for the first time. They do not appear in regular summons. After the event has ended, they can be obtained by using Heroic Grails.

Register as a member and get all the information you want. (It's free!)
Login
Opinions about an article or post go here.
Opinions about an article or post
We at Game8 thank you for your support.
In order for us to make the best articles possible, share your corrections, opinions, and thoughts about "Berkut Rating and Best Builds" with us!
When reporting a problem, please be as specific as possible in providing details such as what conditions the problem occurred under and what kind of effects it had.