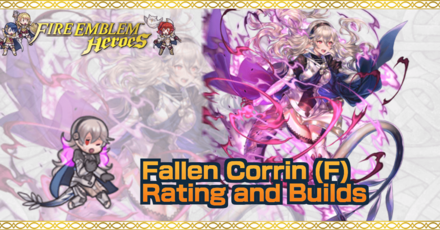 This is a ranking page for the hero Corrin - Wailing Soul from the game Fire Emblem Heroes (FEH). Read on to learn the best IVs (Individual Values), best builds (Inherit Skill), weapon refinement, stats at Lv 40, and more for Fallen Corrin (F).

F!Corrin's best IVs are +Res and -HP. Since this will allow Corrin to survive both physical and magic attacks with relative ease, it makes her extremely easy to use. While ideally it would be best if Corrin had no flaw, -HP is probably the safest flaw to take.

This build uses Distant Counter and Null Follow-Up 3 to allow Fallen F!Corrin to deal with ranged foes. Her exclusive weapon skill gives +6 to all of her stats, letting her always fight at an advantage. As a colorless unit, she is visually without a weakness, and as long as she is not prevented from getting a counterattack and follow-up attack, she is an extremely powerful and versatile hero.

This is a low cost build for Fallen F!Corrin. Her exclusive weapon skill and Atk/Spd Solo have excellent synergy, allowing her to attack with +12 Atk/Spd, giving her amazing offensive power. While she cannot counter ranged foes, she should be able to destroy any foe that attacks her via a counterattack.

Fallen Corrin's Exclusive Weapon currently cannot be refined. This section will be updated if it becomes refinable in the future.

Fallen Corrin (F) is a non-ranged (Range = 1) magic attacker. Therefore, when not accounting for the Weapon Triangle, the amount of damage she deals will be equivalent to her Atk minus the foe's Res stat. As a colorless unit, she will generally take and receive damage regardless of the weapon triangle.

Exclusive weapon grants up to +6 to all stats

F!Corrin's exclusive weapon Savage Breath will give her a buff to all stats corresponding to the number of allies who are not within two spaces. With no allies she gets +6, and with one ally she gets +4. This means that she will not be able to use buffs like Spur/Drive, which require the ally be within two spaces, but at the same time, this makes it very easy for Corrin to separate from her allies and gain her weapon's buff.

Gains massive buffs when not near any allies

F!Corrin also has the excellent A skill Atk/Spd Solo, which gives her Atk/Spd+6 when there are no allies in an adjacent space. This has excellent synergy with her weapon skill, and whenever there are no allies within two spaces, Corrin can make use of both skills to gain Atk/Spd+12 in combat.

Can convert the bonuses of foes into penalties

F!Corrin's default B skill Sudden Panic makes it so that foes who are adjacent to another foe and have less HP than Corrin will have their bonuses converted into penalties. This will effectively shut down enemy buff skills like Fortify/Hone, and since it will also eliminate the threat of Blade weapons, it can throw a wrench into an enemy party's main strategy.

F!Corrin's default skills are designed to make her solo enemies, and having an ally within two spaces will weaken her power. Having a support unit with Spur/Drive skills nearby will make Corrin's skills go to waste, so they do not really need to be on the same team together. On the other hand, Fortify/Hone skills will be granted at the beginning of the turn, meaning Corrin can simply move away after taking them to eliminate this problem.

As a dragon unit, F!Corrin takes lethal damage against units like Legendary Marth or Julia. Regardless of how high her defensive stats are, she is going to struggle against this type of foe, so we recommend you have another party member who can counter anti-dragon units on her behalf.

Heroes who can grant Hone/Fortify buffs

Since F!Corrin needs to be separated from her teammates to activate her weapon skill buffs and show her real power, she is best paired with units who can buff her without needing to be close by. Fortify and Hone skills will totally go to waste, so you ought to pair her with units like Legendary Azura or Fallen Tiki who can grant Spur/Drive type buffs that will take effect from the beginning of the turn.

Heroes who can take down anti-dragon units

F!Corrin will survive a lot longer in battle if she has an ally who can cover her bad matchups like Julia or the Tikis. Units like Legendary Marth are a particular threat to Corrin, so pair her with a strong mage like Reinhardt or Ophelia to help take them down.

As a dragon unit, F!Corrin will take huge damage from anti-dragon units that have dragon-effective weapons, and it will often be lethal. Despite her strong defensive stats, she cannot endure this type of attack, so she needs to take cover when an enemy with a dragon effective weapon is within range.

Should you Unlock Potential for Fallen Corrin (F)?

Corrin - Wailing Soul Only Appears as a 5 Star Hero!

F!Corrin can be used to inherit both Atk/Spd Solo and Sudden Panic. Sudden Panic is even easier to trigger than the effects of Aversa's Night, and when passing it on, make sure to give it to a unit with a high HP stat.


How to Get Fallen Corrin (F) / Illustrations / Voice Actor / Quotes

How to Get Fallen Corrin (F)

Fallen Corrin (F) is a Hero who can be pulled from any summon.

Register as a member and get all the information you want. (It's free!)
Login
Opinions about an article or post go here.
Opinions about an article or post
We at Game8 thank you for your support.
In order for us to make the best articles possible, share your corrections, opinions, and thoughts about "Fallen Corrin (F) Builds and Best IVs" with us!
When reporting a problem, please be as specific as possible in providing details such as what conditions the problem occurred under and what kind of effects it had.