This page will explain the Lost Lore event in Fire Emblem Heroes (FEH). Read on to find out more about the auto-play event known as Lost Lore, including the obtainable rewards, which heroes you should choose to send as scouts for missions, and Hero strikes.

What is Lost Lore?

An Auto-Play Event Where You Deploy Heroes to Various Worlds!

Lost Lore is an auto-play event that can be played idly. You simply choose which heroes you would like to deploy, and when a fixed amount of time passes, you will receive rewards.

Heroes deployed in Lost Lore will have their bond strengthen every 4 hours, and after a certain amount of time spent together, their support rank will increase. If you have a pair of heroes that you would like to increase the support ranks for, you should absolutely take advantage of this event.

First you will select two heroes and deploy them as scouts for a set amount of time. When they return, a Recovery Bar will fill. After completing the 1st Act, you will gain access to the 2nd Act and onward. Since the recovery bar will required for each act will requre more lines than the previous one, you will need to deploy scouts several times to clear them all.

Select from 3 Lengths of Idle Time

You can select the amount of Scout Lines to deploy your allies for. Each line is equivalent to one hour, meaning you will choose from 4, 12, or 20 hours. Heroes deployed may still be used in other events such as Aether Raids or Grand Hero Battles, so you can feel free to deploy even heroes that you use very frequently.

Clear the 4th Act to Strike in a 4-Hero Battle 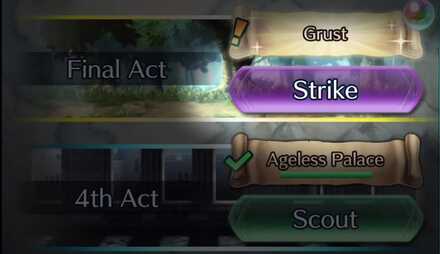 After clearing through the 4th Act, you will be presented with a battle (strike) where your heroes will be dispatched for 20 hours. Just like in scouting missions, this is can be cleared idly, but weapon type and stats will actually have an effect here, so it does matter which heroes you use when you strike.

Check the Status of a Strike 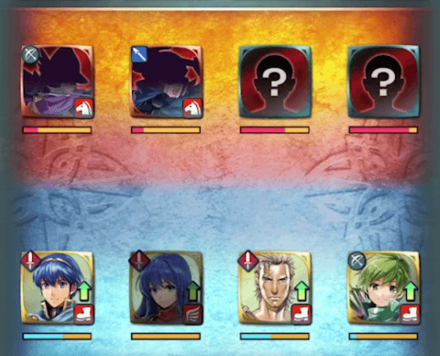 You can check in on the progress of an ongoing strike. While you will be unaware of what foes you are battling in the beginning, the foes will become visible as the battle progresses, so keep an eye on the progress and use what you learn in your next strike.

During battle, units who share supports with eachother will receive bonus stats. If you are not concerned with raising your heroes' supports, then using heroeswith the highest support ranks will give you the biggest advantage.

The heroes that you choose to scout will earn a bonus if they are from the world that they are deployed too, increasing the amount that the recovery bar fills. For example, if you are deploying your heroes to the World of Mystery, Marth and Caeda (who appeared in Mystery of the Emblem) will be bonus heroes. Selecting 2 Heroes from a world has the same effect as selecting only 1, so as long as you deploy one bonus character, you will be fine.

A Hero's Abilities Have No Effect on The Recovery Bar

The abilities and stats of a character have no effect on how much the recovery bar fills. If you deploy a bonus character, the recovery bar raises the same amount whether they are level 1 or level 40, so deploy heroes you like, or ones who you want to increase the support rank for.

Selecting Heroes for a Strike 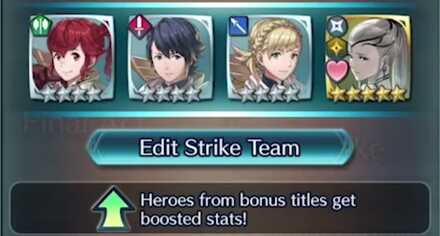 Just like in scouting missions, heroes used in strikes will be bonus heroes if they are from the world they are being deployed to. Bonus heroes will gain a stat bonus, so using them in strikes give you an advantage.

All Allies Will be Treated as 5 Star Heroes

Look at the Hint and Select Heroes with Weapon Advantages

Before going into a strike, check the hint to find out a little bit about the foes that will show up. When the enemy's main force is cavalry, selecting units like Micaiah or Yarne whose weapons are effective on cavalry units will give you an advantage in combat.

You will obtain Orbs and Saga's Acts for completing Scouting Missions and Strikes. Clear all maps to get as many orbs as possible.

When heroes return from scouting they will bring back badges and crystals. Badges will allow you to enhance Sacred Seals, so clear these missions and pile up badges if you would like to create and enhance your seals.

Post (0 Comments)
Opinions about an article or post go here.
Opinions about an article or post
We at Game8 thank you for your support.
In order for us to make the best articles possible, share your corrections, opinions, and thoughts about "Lost Lore Rewards and Best Heroes to Choose" with us!
When reporting a problem, please be as specific as possible in providing details such as what conditions the problem occurred under and what kind of effects it had.