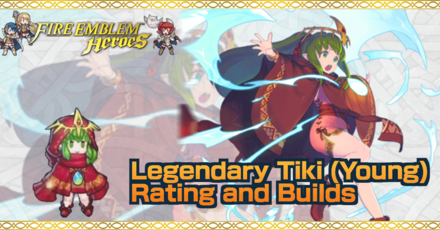 This is a ranking page for the hero Tiki - Legendary Dragon from the game Fire Emblem Heroes (FEH). Read on to learn the best IVs (Individual Values), best builds (Inherit Skill), weapon refinement, stats at Lv 40, and more for Legendary Tiki (Young).

Legendary Tiki's best IVs are +Res and -HP. L!Tiki's stats are excellent, other than the fact that her Res is just a little low, but a +Res asset will allow her to tank more magic damage. On the other hand, HP is generally speaking the best flaw for her to take.

L! Tiki already has Fierce Breath, which is a wonderful skill, but with Steady Breath or Warding Breath, she can further increase her Def or Res stats, which is ideal for her kit. A Breath skill and Bold Fighter allow Aether to trigger much more quickly, and triggering this special to recover HP will keep her in the range to use Quick Riposte, making all skills in this build highly synergistic with one anohter.

This build maximizes L! Tiki's defensive capability while granting her guaranteed follow-up attacks through Vengeful Fighter. Aether in the Special slot will allow her to recover HP and deal heavy damage to a foe, and the synergy from Vengeful Fighter makes it easy to trigger. While the build investment is quite high, the power to endure attacks from dragon effective weapons like Falchion justifies it.

L!Tiki is a close magic attacker. Therefore, the damage she deals is equal to her Atk minus the foe's Res when the effects of the weapon triangle are not considered.

Legendary Tiki is an Earth-Type Legendary Hero, and when summoned, you will receive an Earth Blessing. During Earth Season, allies who appear in a team alongside L!Tiki will gain HP+3 and Spd+3 when they have been given an Earth Blessing.

Exclusive weapon that can always counterattack AND is effective on dragons

Tiki's A Skill Fierce Breath gives her Atk+4 when the foe initiates combat, and special cooldown+1 per attack. Her B skill Bold Fighter will also allow her to speed up her cooldown when she initiates combat as well. She will pretty much be able to activate Moonbow in any battle, and the synergy of L!Tiki's default skillset is one of her greatest strengths.

All of L!Tiki's stats are on the higher end, and her relatively high Spd despite being an armored unit is another one of her great features. She has good defensive stats, so even without Vengeful Fighter, she should be able to tank enemy attacks and strike back with a follow-up. When putting her on an armor/dragon team where she can get access to even more powerful buffs, she is an extremely strong and versatile unit.

Buff to herself and adjacent allies

Tiki has the exclusive C Skill With Everyone!, which, provided there is at least one adjacent unit, will grant +5 to the Def/Res of both Tiki and those units. When paired up with an ally with another buff skill like Ward Armor, both units will be able to receive crazy buffs to their stats.

As an armored unit, Tiki is susceptible to heavy damage from weapons like Slaying Spear+ and Hammer+, which are effective on armored units. Be sure and keep an eye on what type of weapons your opponents are using.

In addition to being weak to armored effective weapons, Tiki takes heavy damage to weapons like Falchion, which are effective on dragons. Be sure and watch out for anti-dragon units on the enemy team.

Legendary Tiki can also take advantage of being in an all-dragon team, receiving buffs from Hone Dragons or Goad Dragons.

If she's in a full armored dragon team, she can also gain benefits from Armor March 3 for more mobility.

As a dragon, Legendary Tiki is weak to weapons that are effective against dragons.

Brave Edelgard can reduce Legendary Tiki's damage by 80% if Legendary Tiki attacks her, as well as debuffing her with her weapon.

Legendary Edelgard can prevent Legendary Tiki from counterattacking due to her weapon and has a guaranteed follow up with her skill Raging Storm.

Brave Hector, meanwhile, has his own sheer bulk that Legendary Tiki will have to get through, not to mention his weapon refine that not only debuffs her, but also prevents her from making follow up attacks.

Tiki - Legendary Dragon Only Appears as a 5 Star Hero!

L! Tiki can be used to inherit Sthe powerful breath skill Steady Breath. However, as a Legendary Hero with excellent skills and stats, we recommend first leveling and building at leat one L!Tiki before merging or foddering any duplicates.


How to Get Legendary Tiki (Young) / Illustrations / Voice Actor / Quotes

How to Get Legendary Tiki (Young)

Legendary Tiki (Young) is a limited time Hero who can be pulled from a Legendary Hero Summoning event. They do not appear in regular summons.

Register as a member and get all the information you want. (It's free!)
Login
Opinions about an article or post go here.
Opinions about an article or post
We at Game8 thank you for your support.
In order for us to make the best articles possible, share your corrections, opinions, and thoughts about "Legendary Tiki Builds and Best IVs" with us!
When reporting a problem, please be as specific as possible in providing details such as what conditions the problem occurred under and what kind of effects it had.