How to Raise your Arena Score | Fire Emblem Heroes (FEH)

Quick Reference Table on How to Raise Your Arena Score

So What Do I Do If I'm a Beginner?

The Highest Obtainable Scores Are For Veteran Players

Since beginners are limited by their pool and the amount of units and merges they have available to them, reaching the top tier of the Arena may prove difficult.

Veteran players are most likely to have more merged units with premium skills to increase their scores because of the time they have devoted in crafting their teams.

You Can Just Play Casually

You can pick your difficulty when you play in Arena and whatever you pick will match your current team's capabilities.

The reward differences aren't that huge if you're not aiming for the topmost tiers so you can just play casually.

You Can Reach the Highest Tier Without Paying

It may take time, but you can definitely get to the highest Arena tier without whaling or paying.

The best thing to do is build your free units as much as you can and try to give them premium skills when you are able. to

You can easily get to Tier 19 and Tier 20 without paying. If you keep at it with your unit projects, you can hit the highest tier!

How to Increase Your Arena Score

Because scoring in Arena takes all the skills slotted and their SP costs into account, you will need to use Skill Inheritance in order to score high.

You must fill all your unit's skill slots with either skills they already have that have high SP costs or premium skills inherited from other units.

You will earn higher points with a 5★ unit that is max level.

That being said, your Arena team should all be made up of 5★ Lvl 40 units.

Explanation of Factors on How to Raise Your Arena Score

Make sure to have any one bonus unit given for the season. Your score is doubled when you use a bonus unit, so it's extremely necessary to have one slotted into your party.

They will gain HP+10 and Atk/Spd/Def/Res+4. This does not affect your unit's BST value and does not apply to enemy units.

If you defeat one enemy unit with the bonus unit, you will get +12 to your arena score. This effect does not increase even if your bonus unit defeats more than one enemy unit.

Your Arena score is affected by all your party's base stats without any merges or weapons or skills equipped.

It's highly recommended you use Armored or Infantry units as they are usually the ones who score the most with their BST.

This is why fully merged 5★ Lvl 40 units with premium skills score the most points in Arena. 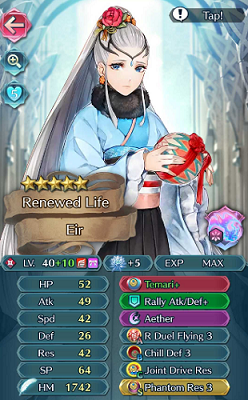 NY!Eir as shown here is heavily invested, being not only +10, but also possessing premium skills.

This will be the most difficult hurdle if you plan on using extremely premium units with really good skills, as you will need several copies.

Merging your untis will add +1 to your score per merge per unit. If you have plans in building a unit for Arena, make them your priority to pull and merge when they are on banner.

Weapons also increase your unit's score depending on the amount of SP required to learn it.

Generally units with their own special weapons like Brave Hector's Maltet will score more than a general use 5★ like Brave Lance+. You will also score higher scores for refined weapons.

Like weapon skills, you will score more if you have premium skills in your unit's assist skill slot.

Rally Atk/Spd+ or Rally Up Atk+ are examples of such skills that have high scoring potential.

An example of a high SP Special is Aether or Ruptured Sky, which cost 500 SP to learn.

Prf Specials like Ayra's Regnal Astra or Fjorm's Ice Mirror II also score high due to the nature of them being Specials that cannot be inherited to another unit.

The same scoring calculations also apply to a unit's skills on the ABC slots. The more expensive the skills, the higher the score.

A good skill that many use in Arena are duel skills like B Duel Flying 4 because it treats a unit's BST as 180.

This also holds true for the Sacred Seal. A Sacred Seal's score value mimics the SP value of its equivalent skill.

For instance, the Atk/Spd Solo 3 Sacred Seal will score higher than Attack +3.

Legendary Julia is very useful during Earth season as she not only treats her own stats as 170, but also grants her allies HP+3.

Making sure that your team holds the same blessing for the season is important if you're entering battle with a Legendary hero with that blessing.

You will not only gain an increase to your score, but will have extra effects depending on the Legendary Hero you have in your team.

The most optimal team you cna create for maximum scoring is two Legendary heroes and 2 units with the appropriate blessing.

There are many factors for being able to score high in Arena and get to the higher tiers.

It will take some time and dedication to build your teams, so choose carefully which units you plan on building out!

Post (0 Comments)
Opinions about an article or post go here.
Opinions about an article or post
We at Game8 thank you for your support.
In order for us to make the best articles possible, share your corrections, opinions, and thoughts about "How to Raise your Arena Score" with us!
When reporting a problem, please be as specific as possible in providing details such as what conditions the problem occurred under and what kind of effects it had.