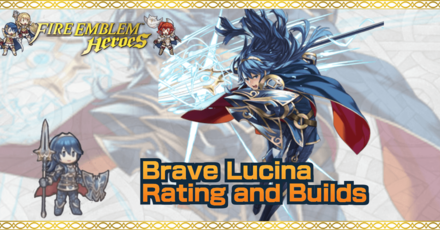 This is a ranking page for the hero Lucina - Brave Princess from the game Fire Emblem Heroes (FEH). Read on to learn the best IVs (Individual Values), best builds (Inherit Skill), weapon refinement, stats at Lv 40, and more for Brave Lucina.

The best IVs for Brave Lucina are +Spd and -HP. With a Spd boon, B!Lucina will have a Spd stat of 39 and will be able to get a follow-up attack on most foes. Her HP is the least important stat, and therefore the best stat to have a flaw in.

If you are building a +10 Merged B!Lucina, we also recommend +Spd. At +10 merges, a Spd boon will give Lucinca a Spd stat of 43, and she will be able to get a follow-up attack on even the speediest of foes. If you are running a Distant Counter build with her, +Res is a great option as well.

We recommend the Special Effect Refine for Geirskögul

The upgrade also gives an additional effect where those allies gain special cooldown charge +1 whenever a foe initiates combat against one of those allies. If the ally that was attacked has a 2-count special like Glimmer or Noontime, it will always trigger when they counterattack, so refining Lucina's weapon will make her an excellent support unit.

B!Lucina is a close ranged physical attacker (range = 1). Therefore, when not accounting for the Weapon Triangle, the amount of damage she deals will be equivalent to her Atk minus the foe's Def stat. She is also equipped with skills that can buff her allies and restore her own HP.

B!Lucina's exclusive weapon Geirskögul will grant Atk/Spd+3 to all physical attacker (sword, lance, axe, dagger, bow, beast) allies within two spaces during combat. Since these stats can be increased just by being in the vicinity of her allies, Lucina is great at both attacking and support.

Further boosts the Spd of allies with Drive Spd

B!Lucina's default C skill Drive Spd 2 will grant Spd+3 to all allies within two spaces during combat. Combined with her weapon skill, that grants her nearby allies a total of Spd+6, increasing the amount of follow-up attacks her team can land while also reducing they ones they have to take.

Lacks skills to support her own stats

While Lucina does have many skills to support her allies, the only boosts to her own stats she gets are those from Sturdy Blow 2 and Def+3 from her weapon. if you want her to be able to take on more powerful foes, she is going to need some support of her own, or she will have to inherit other skills.

Units who need support to their offensive stats

Since B!Lucina's exclusive weapon allows her to increase the Atk and Spd of her allies, it would be best to use those buffs on a powerful attacker like Tibarn or Mareeta. Since Drive/Spur buffs will stack with Fortify/Hone ones, Lucina is very easy to use for offensive support.

B!Lucina's offensive power is not bad, but she is lacking in defensive stats. In particular, her poor Res of only 19 will leave her taking massive damage from mages and dragons. She needs to try and avoid this type of battle whenever possible, so make sure Lucina only fights with magic attackers when you know she can defeat them with no risk of being beaten out with a counterattack.

Lucina - Brave Princess Only Appears as a 5 Star Hero!

Brave Lucina as a Source Hero

B!Lucina can be foddered off to inherit Aether. However, you can also get this skill by unlocking potential on a 3 or 4 Star unit like Chrom, so only fodder her off if you have no other option.


How to Get Brave Lucina / Illustrations / Voice Actor / Quotes

How to Get Brave Lucina

Brave Lucina is a Hero who can be pulled from any summon.

Register as a member and get all the information you want. (It's free!)
Login
Opinions about an article or post go here.
Opinions about an article or post
We at Game8 thank you for your support.
In order for us to make the best articles possible, share your corrections, opinions, and thoughts about "Brave Lucina Builds and Best IVs" with us!
When reporting a problem, please be as specific as possible in providing details such as what conditions the problem occurred under and what kind of effects it had.