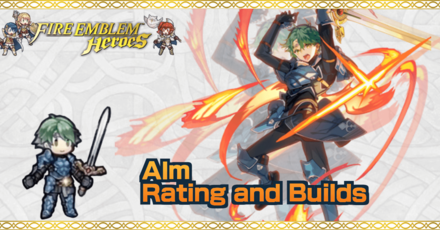 This is a ranking page for the hero Alm - Hero of Prophecy from the game Fire Emblem Heroes (FEH). Read on to learn the best IVs (Individual Values), best builds (Inherit Skill), weapon refinement, stats at Lv 40, and more for Alm.

Alm's recommended IVs are +Atk and -HP. Upgrading Alm's weapon through the Weapon Refinery allows him to attack twice, so simply having a higher Atk stat will make him most powerful. On the other hand, it is ideal to have a lowered HP stat as it can be raised through the Wepaon Refinery, but since he will usually be able to strike down foes before they have a chance to attack him any flaw is okay as long as he as an Atk asset.

This build is centered around upgrading Alm’s weapon skill Falchion in the Weapon Refinery. By equipping him with Death Blow and the Quickened Pulse seal, his special will activate on his second attack, which will take down most manaketes in one strike. By giving him Special Spiral, his special will trigger each time after his first attack, making this build extremely strong.

This is a build that uses as little skill inheritance as possible. The Phantom Spd 3 Seal is essential so that you can use Alm’s Windsweep 3 against a wide range of foes. Additionally, giving him Fury 3 will increase not just his Spd stat (which is needed for Windsweep), but all of his stats across the board, making him useful in many scenarios.

The Effect of Alm's Weapon When Refined

We Recommend the Special Effect Upgrade

We highly recommend the special effect upgrade for Alm's exclusive weapon Falchion. When he has max HP, he will be able to attack consecutively, similar to Brave Sword+. Falchion can also recover HP, making it easy to reach max HP, and being able to attack consecutively with the dragon effective Falchion blade means he can pack a serious punch, so if you have Alm in your barracks you should absolutely prioritize upgrading his weapon above all other ones.

Alm is a close ranged physical attack phase unit. Therefore, when not accounting for the Weapon Triangle, the amount of damage he deals will be equivalent to his Atk minus the foe's Def. Additionally, his weapon is effective in manaketes, letting him deal an extra 1.5 times damage toward them.

Alm's weapon skill Falchion deals bonus damage to dragon type foes (manakete), and its effect allows him to regain HP. Considering the high number of manaketes with high stats that are difficult to take down, Alm is an excellent anti-dragon unit in the FEH meta.

Alm's weapon can even be upgraded through the Weapon Refinery. Doing so gives him the powerful effect of being able to attack twice when at max HP. It does have the setback of dealing 5 damage to Alm after combat, but with Falchion;s healing effect, it is relatively easy to maintain HP.

Alm's skill Windsweep 3 prevents him from making a follow-up attack and prevents a foe from counterattacking. His Spd must exceed the foe's by at least 1, but it will allow him to attack any foe at no risk to himself.

Windsweep Can Be Hard to Activate

Alm's weak point comes from the fact that his Spd stat is not inherently all that high, so Windsweep can be difficult to make use of. In order to really make the most of this skill, you will need to use skill inheritance to raise his stats and equip him with the Phantom Spd 3 seal.

Another weakness comes from his low Res stat, meaning he will take a lot of damage from magic attackers. Be sure to use Alm while remaining cautious of magic opponents.

Should you Unlock Potential for Alm?

Alm - Hero of Prophecy Only Appears as a 5 Star Hero!

Alm as a Source Hero

You many wish to use Alm as a source for Windsweep 3. However, Alm is extremely good when his weapon has been refined, so we recommend that you hang onto at least one unit and raise them before foddering off any duplicates.

How to Get Resplendent Alm / Illustrations / Quotes

How to Get Resplendent Alm

Resplendent Alm can be obtained by buying a FEH Pass. After the distribution period has ended, they can also be purchased by FEH pass subscribers.

How to Get Alm / Illustrations / Voice Actor / Quotes

How to Get Alm

Alm is a Hero who can be pulled from any summon.

Register as a member and get all the information you want. (It's free!)
Login
Opinions about an article or post go here.
Opinions about an article or post
We at Game8 thank you for your support.
In order for us to make the best articles possible, share your corrections, opinions, and thoughts about "Alm Builds and Best IVs" with us!
When reporting a problem, please be as specific as possible in providing details such as what conditions the problem occurred under and what kind of effects it had.