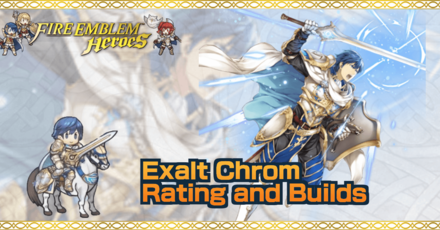 This is a ranking page for the hero Chrom - Knight Exalt from the game Fire Emblem Heroes (FEH). Read on to learn the best IVs (Individual Values), best builds (Inherit Skill), weapon refinement, stats at Lv 40, and more for Exalt Chrom.

Neutral IVs are best for Exalt Chrom, as he has 3 superbanes that can affect his usability greatly. Another argument for neutral IVs is Sealed Falchion's effect that boosts all his stats by +5 whenever he engages combat with HP < 100%. It's better for him to utilize that skill and become a well-balanced hero instead.

Heavy Blade and Desperation are required for this build. Through combat or use of Reciprocal Aid, bring his HP below 50% so that he can prevent enemy counterattacks. This will allow him to gain a guaranteed follow-up attack, and if his Atk exceeds that of the foe, he can reliably trigger his special skill and inflict massive damage to foes.

This is a low cost low investment build for E!Chrom. With Sealed Falchion and Close Def 3, Chrom will gain +11 Def/Res when the foe initiates combat, making him quite a bulky fighter. Fury will make the effect of Sealed Falchion easier to trigger, so use Chrom to finish off foes to quickly gain use of its power.

We recommend the Special Effect Refine for Sealed Falchion

With any upgrade you take for Sealed Falchion, it will make it easier to grab the +5 Atk/Spd/Def/Res buff because it adds another trigger condition. If a bonus is active on Sealed Falchions wielder, they will now activate the buff too.

Additionally, and more imporantly, the sword will now grant an additional +5 Atk/Spd/Def buff during combat it the enemy is at least at 75% HP. It also blocks follow-up attacks from the enemy so this is a very valuable effect.

For Chrom, it makes him very bulky against physical units as the only thing from stopping him becoming a physical wall is his susceptibility to follow-up attacks.

E!Chrom is a close physical attacker (range = 1). Therefore, when not accounting for the Weapon Triangle, the amount of damage he deals will be equivalent to his Atk minus the foe's Def stat.

If Sealed Falchion is specially refined, it can grant him an additional +5 Atk/Spd/Def! If you are at this point and can afford some more investment onto Chrom, you can go for Fury 4 instead. He will be a beast of a unit when it comes to stats when all said is done!

Chill Def 3 inflicts -7 to the unit with the highest Def in the enemy team. This makes Exalt Chrom a great unit to fight against powerful, high-Def stat units such as Legendary Tiki (Young) and Idunn. Another perk of Chill Def 3 is that it affects them regardless of Chrom's position on the map making it easy for Chrom's teammates to take advantage of it as well.

However, it only affects them until their next action, so the penalty wears off if they are granted another action by support units. The penalty will be re-applied to them the next turn, though.

Sword Units gain double SP, provided that Exalt Chrom survives the battle. This is a very helpful skill when it comes to training sword units as it makes it easier for them to get valuable skills that greatly ease the difficulty in training these units.

Exalt Chrom takes 1.5x damage from cavalry-effective weapons like Ridersbane, and one blow from this type of weapon is sure to take him down. Make sure you know what weapons you are up against before hopping too far into the line of battle!

Chrom - Knight Exalt Only Appears as a 5 Star Hero!

Exalt Chrom as a Source Hero

Exalt Chrom can be used to inherit the skills Aether and Chill Def 3. However, since he is only available at 5 Stars, we recommend keeping and building at least one E!Chrom before foddering off any duplicates.

How to Get Exalt Chrom / Illustrations / Voice Actor / Quotes

How to Get Exalt Chrom

Exalt Chrom is a Hero who can be pulled from any summon.

Register as a member and get all the information you want. (It's free!)
Login
Opinions about an article or post go here.
Opinions about an article or post
We at Game8 thank you for your support.
In order for us to make the best articles possible, share your corrections, opinions, and thoughts about "Exalt Chrom Builds and Best IVs" with us!
When reporting a problem, please be as specific as possible in providing details such as what conditions the problem occurred under and what kind of effects it had.