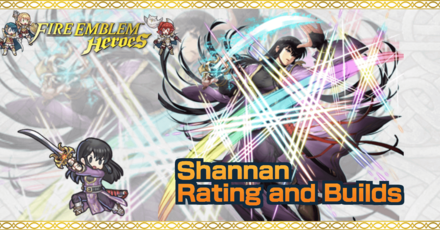 This is a ranking page for the hero Shannan - Wielder of Astra from the game Fire Emblem Heroes (FEH). Read on to learn the best IVs (Individual Values), best builds (Inherit Skill), weapon refinement, stats at Lv 40, and more for Shannan. 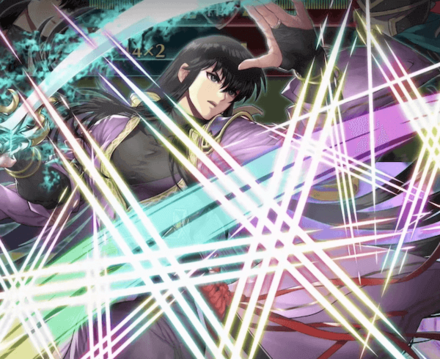 Shannan's best IVs are +Atk and -HP. With a superboon in Atk, Shannan gets +4 in Atk, greatly increasing his overall damage output. Since he has a superbane in Res and would take -4 in that stat, -HP is the ideal bane.

If you are trying to build a +10 Shannan, +Atk is the best IV. With a +Atk IV, Shannan will have an Atk stat of 62 with this boon at +10 merges. If you are aiming to get more follow-up attacks, +Spd is a good IV as well.

Shannan is a close ranged physical attacker (range = 1). Therefore, when not accounting for the Weapon Triangle, the amount of damage he deals will be equivalent to his Atk minus the foe's Def stat.

Weapon grants +5 to all stats and neutralizes enemy penalties

Shannan's exclusive weapon skill Balmung will grant +5 to all of Shannan's stats and neutralize enemy penalties on him if the foe initiates combat or if the foe's HP = 100%. Since this happens whenever the foe initiates combat, it is rather easy to trigger in enemy phase, and relatively easy to trigger in attack phase as well, making it a versatile weapon skill.

Shannan's A skill Steady Posture gives him Spd/Def+6 and the effect of Guard whenever the foe initiates combat. In addition to reducing damage taken from foes, it will make it impossible for many foes to trigger their specials, provided they do not have a skill such as Heavy Blade. It has great synergy with Balmung, and makes Shannan a rather powerful enemy phase unit.

Shannan's exclusive special skill Imperial Astra will boost damage inflicted by 40% of his special when it triggers. With its short cooldown count and the default B Skill Wrath, Shannan can deal a ton of damage through his special.

The effects of Balmung do not work on a foe with less than 100% HP when Shannan initiates combat. Units like Duma who inflict damage to all units at the start of the enemy turn, or units like Ophelia and Igrene who have area damaging specials, as well as units that cast fixed damge through Savage Blow or Pain+, are all bad units to team up with Shannan, as they nullify the ability of his weapon skill.

Shannan has a low Res stat, meaning that he is susceptible to heavy damage from tome wielders and manaketes. Keep an eye on the range of these foes and stay at a safe distance from their attacks.

Shannan - Wielder of Astra Only Appears as a 5 Star Hero!

Shannan as a Source Hero

You can inherit Steady Posture 3 from Shannan. However, he is quite a powerful unit in his own right, so we recommend keeping and building at least one Shannan before foddering off or merging duplicates.

How to Get Shannan / Illustrations / Voice Actor / Quotes

How to Get Shannan

Shannan is a Hero who can be pulled from any summon.

Register as a member and get all the information you want. (It's free!)
Login
Opinions about an article or post go here.
Opinions about an article or post
We at Game8 thank you for your support.
In order for us to make the best articles possible, share your corrections, opinions, and thoughts about "Shannan Builds and Best IVs" with us!
When reporting a problem, please be as specific as possible in providing details such as what conditions the problem occurred under and what kind of effects it had.