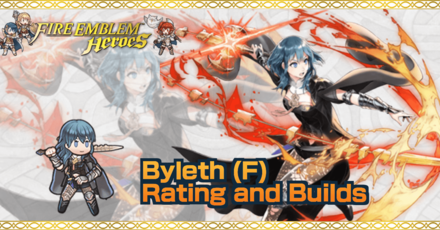 This is a ranking page for the hero Byleth - Proven Professor from the game Fire Emblem Heroes (FEH). Read on to learn the best IVs (Individual Values), best builds (Inherit Skill), weapon refinement, stats at Lv 40, and more for Byleth (F).

Byleth's best IVs are +Atk and -Res. Byleth has such high Spd that follow-up attacks are extremely easy to come by, so maximizing the damage output is the way to good. If you want to ensure she gets a follow-up attack when going into battle, Spd is a superboon, making it a a good asset as well.

This build is based around inheriting Distant Counter and Null C-Disrupt. This build will nullify the effects of skills like Dazzling Staff and Firesweep Bow that prevent a counterattack, allowing Byleth to counterattack any foe, including Veronica.

This is a build based around inheriting Swift Sparrow and Special Spiral. By making use of her high Spd stat and equipping Flashing Blade to maximize her attack ability, she can safely trigger Galeforce. When Special Spiral is unavailable to you, Wings of Mercy is a great substitute.

This is a low investment build for Byleth (F). Since her default skills are already amazing, equipping her with an assist like Reposition and seal like Quickened Pulse is enough to make her ready for battle.

F!Byleth is a close ranged physical attacker (range = 1). Therefore, when not accounting for the Weapon Triangle, the amount of damage she deals will be equivalent to her Atk minus the foe's Def stat.

Exclusive weapon has Null Follow-Up built into it

F!Byleth's exclusive weapon skill, Creator Sword, has the effect of Null Follow-Up. This will allow her to reduce the damage taken from foes with skills like Bold Fighter and Quick Riposte, and will also allow her to make a follow-up attack even against foes with the skill Wary Fighter.

Creator Sword will also prevent any enemy skill from slowing down or speeding up a special's cooldown or speeding up. This means that she can nullify Flashing Blade or Heavy Blade and use her special without being affected by Special Fighter or Guard.

Low cooldown special that is effective on dragons and beasts

Her special skill Ruptured Sky will boost damage by 40% of a foe's Atk if they are a dragon or beast. When her HP drops to 75%, Byleth will be able to use the effects of Wrath and Ruptured Sky together to get a guaranteed special, which lets her deal heavy damage to characters like Tibarn or Duma.

With her low Res stat, F!Byleth will take a lot of damage from mages and dragons. Keep her out of reach from powerful blue mages like Reinhardt and Ophelia.

Byleth - Proven Professor Only Appears as a 5 Star Hero!

Byleth (F) as a Source Hero

You may want to use F!Byleth to inherit Ruptured Sky or Fury 4. However, as Byleth is a very useful hero, we recommend you keep at least one before foddering off a duplicate.

How to Get Byleth (F) / Illustrations / Voice Actor / Quotes

How to Get Byleth (F)

Byleth (F) is a Hero who can be pulled from any summon.

Register as a member and get all the information you want. (It's free!)
Login
Opinions about an article or post go here.
Opinions about an article or post
We at Game8 thank you for your support.
In order for us to make the best articles possible, share your corrections, opinions, and thoughts about "Byleth (F) Builds and Best IVs" with us!
When reporting a problem, please be as specific as possible in providing details such as what conditions the problem occurred under and what kind of effects it had.