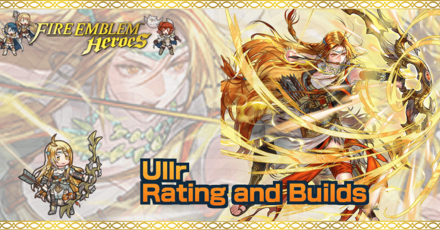 This is a ranking page for the hero Ullr - The Bowmaster from the game Fire Emblem Heroes (FEH). Read on to learn the best IVs (Individual Values), best builds (Inherit Skill), weapon refinement, stats at Lv 40, and more for Ullr.

The Best IVs for ullr are +Spd and -Res. With her superboon in Spd and Yngvi Ascendant ignoring follow-up negation, Ullr can create follow-up attacks through outspeeding her opponents. Her Res is a dump stat and is unsalvageable, thus it is safe to take as a bane.

If you are trying to merge a +10 Ullr, we recommend +Spd. This aids her greatly in attacking twice through outspeeding her opponents. Atk is also a good choice; it is a superboon as well and her Spd is still high even without choosing it as a boon.

This is a general use build for Ullr that can also function in Arena! Ullr's entire base kit is good as it is. Give her Reposition for general use and give her any Dual Rally assist skill to maximize scoring in the Arena.

Ullr is a ranged physical attack phase unit. Therefore, when not accounting for the Weapon Triangle, the amount of damage she deals will be equivalent to her Atk minus the foe's Def stat.

A Mythic Hero who can boost allies' HP and Spd

Ullr is a Mythic Hero who will grant you a Light Blessing when summoned. During Light Season, Ullr's allies who also have a Light Blessing will receive a HP+5 and Spd+4 to their stats, increasing the party's viability. 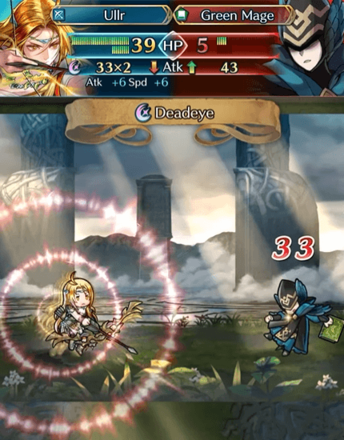 Ullr winds up for second shot! Yngvi Ascendant allows her to strike twice without retaliation. The bonuses from Holy Yewfelle can be seen too.

Ullr gets a lot of bonuses from her skills when initiating combat so she should initiate attacks whenever possible! The bonuses are as follows:

Coupled with the stat boosts she gets from Life and Death 4 and the Special acceleration on her weapon and Time's Pulse 3, Ullr is a player phase powerhouse that can potentially one-shot any unit she faces!

Ullr doesn't have to worry about effects that slow her Special cooldown charge, as Holy Yewfelle negates them!

Her weapon also negates any penalties to her Atk and Spd, which means that units who rely on debuffs to take her down will be receiving the full force of whatever damage she has to offer.

This also means that she will be able to reliably trigger her Special again and again every time she attacks.

Deadeye gets past damage reduction

Because of Deadeye's effect, Ullr is able to deal full damage to units who have damage reduction in their skills like Fallen Edelgard or Legendary Dimitri.

And due to the fact that she gets a guaranteed follow-up attack from Yngvi Ascendant, she will potentially be able to to one-shot these types of units with ease.

Ullr is a Light Mythic hero that boosts Spd, which puts her in the same category as Peony.

Because of this, having her see use in Aether Raids might diminish as not only does Peony give the same effects as she does to her allies, but she is also a dancer unit and able to grant additional actions.

Locked in the player phase

While Life and Death 4 gives massive Atk and Spd boosts, the drawback is that it will decrease Ullr's Def and Res.

Her weapon and B skill also locks her into the player phase, as she must initiate combat to get the effects.

Because of the lack of Close Counter, Ullr is vulnerable in the enemy phase, especially against melee enemy units as she cannot retaliate.

With the lowered Def and Res, she could potentially be one-shotted if she is attacked, so make sure to keep her out of range!

The nullification of the Guard 3 effect on her weapon is only active during combat.

This means that any unit packing Pulse Smoke 3 slows her Special down as it applies after combat.

Ullr - The Bowmaster Only Appears as a 5 Star Hero!

Ullr as a Source Hero

You can get two of these skills if you are able to pre-inherit the lower level skills from other sources. This is to maximize each Ullr copy you have.

How to Get Ullr / Illustrations / Voice Actor / Quotes

How to Get Ullr

Ullr is a limited time Hero who can be pulled from a Mythic Hero Summoning event. They do not appear in regular summons.

Register as a member and get all the information you want. (It's free!)
Login
Opinions about an article or post go here.
Opinions about an article or post
We at Game8 thank you for your support.
In order for us to make the best articles possible, share your corrections, opinions, and thoughts about "Ullr Builds and Best IVs" with us!
When reporting a problem, please be as specific as possible in providing details such as what conditions the problem occurred under and what kind of effects it had.