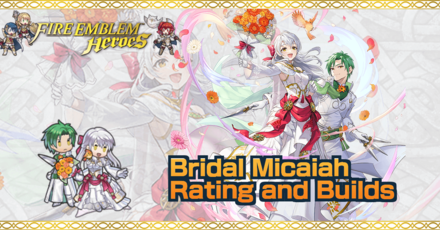 This is a ranking page for the hero Micaiah - Dawn Wind's Duo from the game Fire Emblem Heroes (FEH). Read on to learn the best IVs (Individual Values), best builds (Inherit Skill), weapon refinement, stats at Lv 40, and more for Bridal Micaiah.

The best IVs for Bridal Micaiah are +Atk and -Def. A +Atk IV adds +4 to the stat as it is a superboon. Her Def is already low and it isn't super important for her, so it is safe to take Def as a bane.

We recommend a +Atk IV when merging Bridal Micaiah to +10. It is not worth it to try and raise her very low Spd, so just raise the Atk and try to one-shot opponents through other Atk raising buffs from other units.

Bridal Micaiah's weapon cannot currently be refined. This section will be updated if it becomes refineable in the future!

Bridal Micaiah is a ranged magic attacker (range = 2). Therefore, when not accounting for the Weapon Triangle, the amount of damage she deals will be equivalent to her Atk minus the foe's Res stat. On top of this, she has access to an additional Duo Skill, which can be activated once per battle.

B!Micaiah's Duo Skill raises her arena score, in addition to unleashing a powerful battle effect. Duo Heroes have a Duo Skill which can be used once per map. Additionally, her Duel effect treats her stats as 185 in Arena modes, giving her a big advantage over many other heroes.

The effect of Micaiah's Duo Skill is shown below 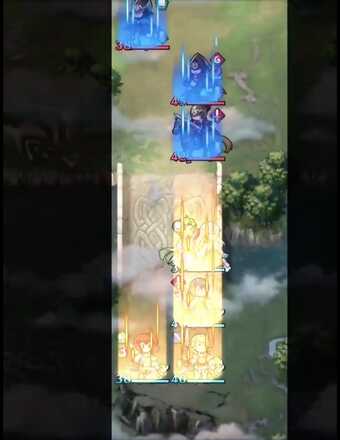 Grants【Dominance】to unit and allies within 3 columns centered on unit. Inflicts Def/Res -7 on foes within 3 columns centered on unit through their next actions.
【Dominance】
Unit deals additional damage = total penalties on foe for 1 turn.
(Duo Skills can be used once per map by tapping the Duo button. Duo Skills cannot be used by units deployed using Pair Up.)

Bridal Micaiah's duo skill inflicts -7 Def/Res to all enemies within 3 columns centered around Micaiah. Additionally, it also grants her allies within the same AoE with Dominance.

Dominance allows her allies to deal additional damage equal to the total number of penalties on the opponent. Because it inflicts a total of -14 penalty, dominance grants +14 damage. This all adds up to +21 damage for both physical and magic users if the enemy that Micaiah is attacking is debuffed by the duo skill.

It only lasts for one turn, so be sure to position Bridal Micaiah and her allies properly to before using to avoid wasting this duo skill that can easily turn the tides of battle.

Joyful Vows is effective against armored and cavalry units. It also grants Atk/Res +6 if bonuses are active on Bridal Micaiah. Because Atk/Res Oath 3 counts as a bonus and is very easy to activate, you can easily enjoy a +6 Atk/Res buff to Bridal Micaiah most of the time. Additionally, it also prevents foes from making follow-up attacks if the same trigger condition is met. This makes Bridal Micaiah a good Res tank if she is adjacent to an ally.

Atk/Res Oath 3 buffs Bridal Micaiah for +5 Atk/Res if an ally is adjacent to her and Atk/Res Push 4 grants +7 Atk/Res if Bridal Micaiah's HP ≥ 25%. Although the latter also inflicts 5 damage to Micaiah if she initiates attacks, the overall damage taken will be much lower if you are dealing with magic users, and at the same time, the damage is effectively cancelled by the effects of Mystic Boost 3.

These two skills combined with Joyful Vows total +18 Atk/Res to Bridal Micaiah making her a good unit to deal with most magic units.

Bridal Micaiah has low Spd and Def. This makes her weak to fast physical attackers like Hana, Brave Eliwood or Bridal Nailah who can all more or less take her down in one turn. Be mindful of Bridal Micaiah's positioning in relation to units that can take her down easily.

As a flying unit, Bridal Micaiah takes 1.5x damage from bows and weapons effective on flying units. Be sure to keep her out of the range of archers, and leave them to other units.

Should you Unlock Potential for Bridal Micaiah?

Micaiah - Dawn Wind's Duo Only Appears as a 5 Star Hero!

Bridal Micaiah as a Source Hero

Bridal Micaiah can be used to inherit the skills Mystic Boost 3 and Atk/Res Oath 3. However, since Bridal Micaiah is a powerful hero with a unique duo skill, we recommend training and building her instead.

How to Get Bridal Micaiah / Illustrations / Voice Actor / Quotes

How to Get Bridal Micaiah

Bridal Micaiah is a limited time Hero who can be pulled from a Special Heroes Summoning Event. They do not appear in regular summons.

Register as a member and get all the information you want. (It's free!)
Login
Opinions about an article or post go here.
Opinions about an article or post
We at Game8 thank you for your support.
In order for us to make the best articles possible, share your corrections, opinions, and thoughts about "Bridal Micaiah Builds and Best IVs" with us!
When reporting a problem, please be as specific as possible in providing details such as what conditions the problem occurred under and what kind of effects it had.