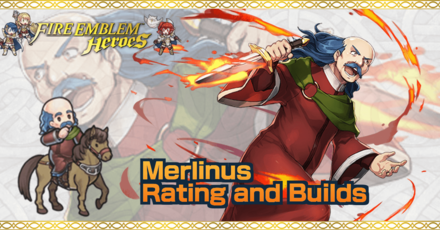 This is a ranking page for the hero Merlinus - Pherae's Clerk from the game Fire Emblem Heroes (FEH). Read on to learn the best IVs (Individual Values), best builds (Inherit Skill), weapon refinement, stats at Lv 40, and more for Merlinus.

The best IVs for Merlinus are +Spd and -Atk. A higher Spd stat allows Merlinus to get a ton of follow-up attacks on his foes. It also protects him from hostile follow-up attacks. Merlinus has an abysmally low Atk stat and it is not worth raising to increase his damage by a tad bit so it should be the bane you take. Since he is a 4★ demote, it is fairly easy to get another copy of him so make sure to get that 1st merge to eliminate his bane.

As tempting as it might be to run a dagger cavalry unit as an offensive unit, Merlinus' Atk just not allows him to make the cut! He is a debuff-type support and not a primary offensive option.

We recommend a +Spd IV when merging Merlinus to 10. This is for the same reasons as above. With this IV, he can reach 42 Spd which is at a range where he can score lots of follow-up attacks if he has ample support from allies.

If you plan to run Merlinus as a unit in Pawns of Loki where HP is very important, you can go for a +HP IV instead. He has a superboon in this stat so your IV choice will be put to great use.

Make sure to upgrade Smoke Dagger+ to access a more powerful debuffing effect for Merlinus!

Compared to the budget build, this Close Counter build is very high investment. Close Counter allows Merlinus to spread debuffs frequently by baiting attacks in the enemy phase. Ruptured Sky allows him to deal more damage as it leverages foe's Atk stats to deal damage. Panic Ploy 3 leverages his high HP to inflict even more debuffs to the enemy! Guard 3 and Close Def 3 provides him with some stats to survive longer and inflict tons of debuffs into the enemy team.

It can be said that this is a more offensive take to Merlinus compared to the budget build.

The goal of this build is to improve Merlinus' bulk to allow him to spread debuffs as safely as possible. He already has decent HP so getting Armored Blow 3 will pad him with some stats to make good use of his HP. Distant Guard 3 and Close Guard 3 works well with Wings of Mercy 3 as it allows Merlinus to warp to allies in need and provide them with some defensive stats.

This is a defensively-oriented build for Merlinus as it uses his great mobility to improve his and his allies' bulk. If you need a more offensive build, check out the Close Counter Merlinus build.

Merlinus's weapon cannot currently be refined. This section will be updated if it becomes refineable in the future!

Merlinus is a ranged physical attacker (range = 2). Therefore, when not accounting for the Weapon Triangle, the amount of damage he deals will be equivalent to his Atk minus the foe's Def stat.

Merlinus currenty (November 2020) holds the title as the highest HP cavalry unit. This allows him to run skills like Panic Ploy 3 fairly easily as it relies on having a great HP stat. Check out our Close Counter Merlinus build to learn how to run Panic Ploy on Merlinus.

This also makes him an obvious choice for a cavalry unit in Pawns of Loki as scoring in that game mode relies heavily on units having high HP stats.

The mentioned Close Counter Merlinus is an offensive take to Merlinus and the Budget Merlinus build is a defensive one. Check out the builds section for an explanation on how both builds work.

Smoke Dagger applies a -6 Def/Res debuff after combat on all foes within 2 spaces of Merlinus' target. Once upgraded, it will instead inflict -6 Atk/Spd/Def/Res so make sure to get that upgrade as that debuff is massive! It allows Merlinus' allies to swoop in and finish off those weakened enemies.

A very easy to trigger buff, Distant Guard 3 grants +4 Def/Res in combat to all ally units within 2 spaces of her if the foe is using a bow, dagger, tome or staff weapon. The fact that the range for this weapon is 2 spaces makes it very easy to utilize as it can help keep Merlinus safe from units that can easily take him out.

Can Warp to Allies in Need

Wings of Mercy 3 allows Merlinus to teleport to spaces adjacent to allies if their HP ≤ 50%. This allows Merlinus to potentially turn the tides of battle together with that ally using the his debuffs and buffs mentioned above. This is especially important in Grand Hero Battles where all allies need to survive for you to clear the map.

This works well with Distant Guard and Close Guard 3. Check out the builds section to know how to utilize Wings of Mercy 3 to easily provide allies with more bulk.

Merlinus has a very weak Atk stat. It only reaches 29 with Poison Dagger+ at level 40. It is recommended that you strategically treat him as a debuff-type support instead of a primary offensive option.

Merlinus takes 1.5x damage from cavalry-effective weapons like Ridersbane, and one blow from this type of weapon is sure to take her down. Make sure you know what weapons you are up against before hopping too far into the line of battle!

Should you Unlock Potential for Merlinus?

We Do Not Recommend Unlocking Potential for Merlinus - Pherae's Clerk!

Merlinus as a Source Hero

Merlinus can be used to inherit the skills Wings of Mercy 3 or Distant Guard 3. Please take note that Distant Guard 3 can only be inherited at 5★ so you would need to spend some feathers before being able get it off him if you have a 4★ copy.

How to Get Merlinus / Illustrations / Voice Actor / Quotes

Merlinus is a Hero who can be pulled from any summon.

>>1 Hi! Thanks for the comment. After re-reading the section, it seems to be fine. 'We cannot recommend you to Unlock Potential to make Merlinus - Pherae's Clerk a 5 Star Hero.' We did not mean to say that he is a 5★ hero. We meant to say it is not recommended to turn him into one. Thank you for pointing this out, though! Please continue to report errors through the comments. Hope you have a good day, my dude. Cheers!

The unlock potential section states Merlinus only comes as a 5 star which is untrue, considering I have a 4 star Merlinus. Just a heads up so people dont get the wrong information. Cheers!

Register as a member and get all the information you want. (It's free!)
Login
Opinions about an article or post go here.
Opinions about an article or post
We at Game8 thank you for your support.
In order for us to make the best articles possible, share your corrections, opinions, and thoughts about "Merlinus Builds and Best IVs" with us!
When reporting a problem, please be as specific as possible in providing details such as what conditions the problem occurred under and what kind of effects it had.