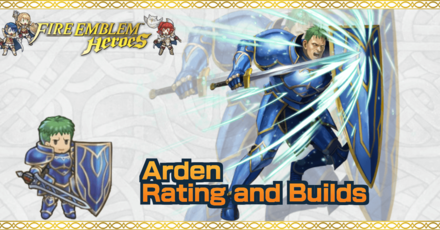 This is a ranking page for the hero Arden - Strong and Tough from the game Fire Emblem Heroes (FEH). Read on to learn the best IVs (Individual Values), best builds (Inherit Skill), weapon refinement, stats at Lv 40, and more for Arden.

Note: Arden's stats will always have no IVs.

As a hero obtainable only through Tempest Trials, Arden will always have neutral IVs by default. The only way to access IVs for this unit is through using Trait Fruits.

The best IVs for Arden are +Atk and -Spd. Arden relies solely on Atk to deal damage as he can already nail two attacks into the opponent with Brave Sword+ or Arden's Blade. Because the two mentioned weapons will send his already low Spd to abysmal levels, it would not hurt him further to take a -Spd IV. Do not worry as it is not that important to Arden.

We recommend a +Atk IV when merging Arden to 10. This is for the same reasons as above. At this point, he can take out a lot of units in one player phase with Brave Sword+ or Arden's Blade. Even if you are not using these weapons, it is still generally the best IV for Arden. If you prefer Arden to specialize in being a physical wall, take a +Def IV instead! Though you will be definitely be missing out on a lot of damage as he has the potential to score consistent quad-attacks in both phases! Even a small change in Atk means huge damage.

This build further enhances Arden’s defensive capability, making him even more tanky. A Fortify Armor bonus from an ally will turn him into a nearly impenetrable fortress who can shield your other allies. With his extremely high HP stat, Panic Ploy is a great C Skill for him as it will effect nearly any enemy.

Arden’s HP is incredibly high, so giving him Fire Boost will be like always having Atk +6. If you are using him for multi-map battles, the enemies may have HP higher than his, so Death Blow would be a little more reliable in these situations. You could also use Threaten Def in the C slot and instead use the Panic Ploy 3 seal.

We recommend the Special Effect Refine for Arden's Blade

As long as Arden is at least 50% HP, it grants +4 Atk +6 Def to him, and it also inflicts Special cooldown charge -1 on foe per attack.

The trigger condition is exactly the same as Follow-Up Ring so if you have been running Arden for a while, you do not even have to worry about getting used to running this special effect refine. the +4 Atk bonus might seem lackluster, but remember that Arden has the ability to attack 4 times in both phases so that's effectively a +16 Atk net bonus! The Def bonus is useful too and the special delay is simply amazing as he hits up to four times.

Arden is a close ranged physical attack phase unit. Therefore, when not accounting for the Weapon Triangle, the amount of damage he deals will be equivalent to his Atk minus the foe's Def. Additionally, his extremely high Def stat means that he can act as a physical wall and tank many physical attacks, and he can get guaranteed follow-up attacks thanks to his B Slot skill.

Arden is in the top class of all heroes in terms of his HP stat. His Def stat is also very high, so it is nearly impossible to OHKO him with a physical attack.

This can be very useful if you decide to run him in Pawns of Loki as scoring is highly based on the remaining HP of your units.

Can Attack 4 Times With Follow-Up Ring!

His exclusive skill Follow-Up Ring gives him a guaranteed follow-up attack, regardless of the foe's Spd stat or weapon. He also is equipped with a Brave Sword, which means that when he initiates combat, he can strike four times if he has at least 50% HP, dealing devastating damage to his foes.

If you are able to get Arden's Blade on him, you can nail quad-attacks in both phases. This cannot be simply overlooked so make sure to get this weapon if you plan to run Arden consistently

Can Support His Allies' Defense Too

His C Slot skill Drive Def will grant Def +3 to alies within two spaces. This means that he can play a support role in addition to being a tank.

Arden may be strong and tough, but boy is he slow. His Spd stat is so low in fact that he will suffer a follow-up attack from nearly every hero. Additonally, Wary Fighter is not of much use because it would cancel out his Follow-Up Ring skill.

In addition to his terrible Spd stat, he has very low Resistance as well, so when he gets into battle with a foe who deals magic damage, it is very likely that he will take heavy damage and a follow-up attack, which can quickly finish him off. Be very wary so that Arden stays out of the danger zone of magic foes.

Should you Unlock Potential for Arden?

We Recommend Unlocking Potential for Arden - Strong and Tough!

Arden as a Source Hero

Develop Arden and Do Not Fodder Him Off!

Because Arden can only be obtained via Tempest Trials, and does not possess any skills that cannot be obtained from other 4-Star heroes, it would be a waste to fodder him off. Therefore, our recommendation is to raise him and use any duplicate that you receive to merge him.

Additionally, he can be used in Pawns of Loki as his HP is very high and said stat is very important in the battle chess-inspired game mode.

How to Get Arden / Illustrations / Voice Actor / Quotes

How to Get Arden

Arden is a limited time Hero who can be obtained as a reward for your score in the Tempest Trials. They do not appear in regular summons. After the event has ended, they can be obtained by using Heroic Grails.

Register as a member and get all the information you want. (It's free!)
Login
Opinions about an article or post go here.
Opinions about an article or post
We at Game8 thank you for your support.
In order for us to make the best articles possible, share your corrections, opinions, and thoughts about "Arden Rating and Best Builds" with us!
When reporting a problem, please be as specific as possible in providing details such as what conditions the problem occurred under and what kind of effects it had.