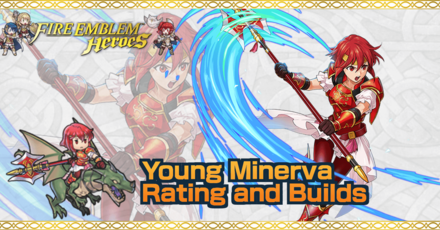 This is a ranking page for the hero Minerva - Princess-Knight from the game Fire Emblem Heroes (FEH). Read on to learn the best IVs (Individual Values), best builds (Inherit Skill), weapon refinement, stats at Lv 40, and more for Young Minerva.

Note: Young Minerva's stats will always have no IVs.

As a hero obtainable only through Tempest Trials, Young Minerva has no access to IVs. This means that this unit will always have base stats when obtained, with no flaws or assets.

Young Minerva's weapon cannot currently be refined. This section will be updated if it becomes refineable in the future!

Young Minerva is a close physical attacker (range = 1). Therefore, when not accounting for the Weapon Triangle, the amount of damage she deals will be equivalent to her Atk minus the foe's Def stat.

Young Minerva at 5 stars Lv. 40 averages out at 38 Def with her skills included. With the help of Dragoon Shield, she is pretty strong against all physical attacks, and doesn't share the weakness to bows that almost all other fliers have. It also grants her +3 Atk/Spd/Def adding that adds to her overall tankiness. Combined with her decent Def, the only thing you need to be wary of when using Young Minerva are magic attackers.

Dragoon Axe accelerates special trigger and provides bonuses if the foe's HP is 100%. If the said condition is met, Dragoon Axe grants Young Minerva +4 to all stats during combat and inflicts -1 cooldown charge on foe per attack. These stat buffs and the ability to slow down opponent's specials allow Minerva to take even less damage than before. Her Def, Dragoon Axe, Dragoon Shield and her ability to take advantage of 100% HP foes allow her to become a great frontliner in maps that do not have many magic threats.

Young Minerva has low Res compared to her other stats. In fact, her Res at 5 star Lv. 40 is 19 which is exactly half her Def. She can be taken out quickly by magic users, especially those with the red attribute. Always be aware of Young Minerva's positioning in relation to magic users that can deal high damage to her.

Unlike red breath users whom Young Minerva can at least counterattack, she is completely defenseless against red tome users. It is not unlikely that she gets taken out by these units in one turn so let her allies take out red magic users so Minerva can focus on other units.

Should you Unlock Potential for Young Minerva?

We Recommend You Unlock Potential for Minerva - Princess-Knight!

Young Minerva as a Source Hero

Young Minerva can be used to inherit the skill Flier Formation 3. However, since Young Minerva is a unit obtained from Tempest Trials, the number of units you can obtain is 2—one at 4 stars and the other at 5. Think carefully before you fodder off Young Minerva for this skill.

How to Get Young Minerva / Illustrations / Voice Actor / Quotes

How to Get Young Minerva

Young Minerva is a limited time Hero who can be obtained as a reward for your score in the Tempest Trials. They do not appear in regular summons. After the event has ended, they can be obtained by using Heroic Grails.

>>1 Not weird considering Young Caeda and all of the Young OGs COMPLETELY OUTLCASSES all of their other counterparts even if you don't IS or anything.

She completely outclasses her adult self! Weird...but cool because I made a +1 5* using the freebies

Register as a member and get all the information you want. (It's free!)
Login
Opinions about an article or post go here.
Opinions about an article or post
We at Game8 thank you for your support.
In order for us to make the best articles possible, share your corrections, opinions, and thoughts about "Young Minerva Best Builds and Rating" with us!
When reporting a problem, please be as specific as possible in providing details such as what conditions the problem occurred under and what kind of effects it had.