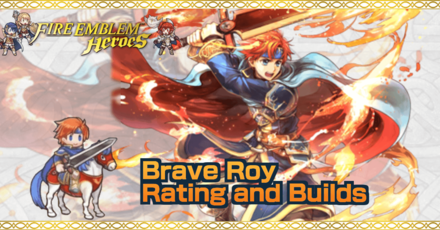 This is a ranking page for the hero Roy - Brave Lion from the game Fire Emblem Heroes (FEH). Read on to learn the best IVs (Individual Values), best builds (Inherit Skill), weapon refinement, stats at Lv 40, and more for Brave Roy.

The best IVs for B!Roy are +Spd and -Res. Gaining easier follow-up attacks with a +Spd IV or dealing extra damage with a +Atk IV are both good options for Roy. Roy's Res stat is nothing to brag about, so it is the ideal bane stat.

If you are building a +10 Merged Brave Roy, we recommend a +Atk IV. At +10 merges, an Atk boon will bring B!Roy to an Atk stat of 58, which will allow him to trigger the effects of Blazing Durandal even in Abyssal modes against very powerful foes.

A Spd boon would also bring him up to a Spd of 38, and when combined with the special effect upgrade of Blazing Durandal, 45, so this is a great option if your goal is landing even more follow-up attacks.

We recommend the Special Effect Refine for Blazing Durandal

With the special effect upgrade for this weapon, B!Roy will gain Spd+7, Def+10, and be able to prevent the foe's follow-up attack. When you combine this with his A skill Steady Blow 2, he will gain a total of Spd+11 and Def+14 when initiating combat, and since he will be able to withstand enemy attacks more safely, Desperation will trigger much more easily.

Being able to prevent an enemy follow-up attack also means blocking skills like Quick Riposte or Vengeful Fighter, making foes with those skills easier for Roy to take out. If you want to make the most out of Roy in the attack phase, we highly recommend this upgrade.

B!Roy is a close ranged physical attacker (range = 1). Therefore, when not accounting for the Weapon Triangle, the amount of damage he deals will be equivalent to his Atk minus the foe's Def stat. Additionally, his weapon allows for faster triggering specials, and his special can grant him an additional move action when triggered.

B!Roy's exclusive weapon Blazing Durandal will grant him Atk+3, and has the same effect as Heavy Blade 3. With his default skill Galeforce, he can attack, gain a follow-up, and then gain another action after his follow-up attack. Afterward, you can choose to either swoop in and take down another foe, or retreat to safety.

Follow-up attacks will come before an enemy counterattack

With the B Skill Desperation, Roy can gain a follow-up attack before the foe has a chance to counterattack. Galeforce and Desperation have excellent synergy, allowing him to take down foe after foe in the attack phase. With these skills, Brave Roy has the ability to solo KO half of the enemy team in a turn.

Since he is a cavalry unit, B!Roy has access to cavalry-only support buffs. When an ally has Hone Cavalry and can raise his Atk on top of the bonus from Steady Blow, Roy will have Atk 57 and Spd 44, which will likely trigger Durandal's effect. This in turn combined with Desperation will allow him to attack twice in a row and trigger Galefoce, at which point he can freely move again.

B!Roy's HP, Def, and Res are all rather unimpressive. Tanking too many successive enemy attacks, or taking an attack from a blue unit, will spell trouble for Roy. Keep an eye on B!Roy's position after he has ended his movement.

While he does have access to those fantastic support buffs, being a cavalry unit also means that a hit from a weapon like Ridersbane is likely to spell the end for Roy. Keep away from foes with cavalry-effective weapons.

Should you Unlock Potential for Brave Roy?

Roy - Brave Lion Only Appears as a 5 Star Hero!

Brave Roy as a Source Hero

B!Roy can be foddered off to learn Galeforce. However, this skill can also be learned by unlocking potential on other 3 or 4 star units, so only use B!Roy to inherit this skill if there is no other choice.


How to Get Brave Roy / Illustrations / Voice Actor / Quotes

How to Get Brave Roy

Brave Roy is a Hero who can be pulled from any summon.

Register as a member and get all the information you want. (It's free!)
Login
Opinions about an article or post go here.
Opinions about an article or post
We at Game8 thank you for your support.
In order for us to make the best articles possible, share your corrections, opinions, and thoughts about "Brave Roy Builds and Best IVs" with us!
When reporting a problem, please be as specific as possible in providing details such as what conditions the problem occurred under and what kind of effects it had.