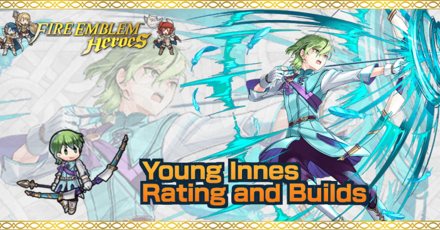 This is a ranking page for the hero Innes - Frelian Moonlight from the game Fire Emblem Heroes (FEH). Read on to learn the best IVs (Individual Values), best builds (Inherit Skill), weapon refinement, stats at Lv 40, and more for Young Innes.

As a hero obtainable only through Tempest Trials, Young Innes will always have neutral IVs by default. The only way to access IVs for this unit is through using Trait Fruits.

The best IVs for Young Innes are +Spd and -HP.

He has a Superboon in Spd and raising it will enable him to potentially double enemy units.

If you would like more one-shot potential, however, you can also opt to make him +Atk instead.

We recommend a +Spd IV when merging Young Innes. He will have 46 Spd at +10, making it easier for him to double.

If you would like more power of out him, consider +Atk for merging instead.

A high buget build for Young Innes that allows him rapid activation of Ruptured Sky through Time's Pulse 3 and Bow of Frelia. It requires premium fodder, but it allows Young Innes to thrive in the metagame of 2021.

This budget build for Young Innes inherits a standard Reposition, a very cheap Swordbreaker 3 and a readily available Swift Sparrow 2 Seal. Though the build is very simple, it grants him many favorable matchups.

Note: Young Innes's stats will always have no IVs.

Young Innes is a ranged physical attacker (range = 2). Therefore, when not accounting for the Weapon Triangle, the amount of damage he deals will be equivalent to his Atk minus the foe's Def stat.

Possesses a prf. bow with an EXTREMELY ideal effect!

If Young Innes' HP ≥ 25%, Bow of Frelia grants +6 Atk/Spd. It also grants an effect similar to the high demand Deadeye where the bow can neutralize non-special damage reduction effects if his Special activates. So in a way, it emulates Deadeye's mechanics. Although instead of doubling the damage, it inflicts +7 pure damage against the foe. This is on top of effects of the Special skill he is using so expect big damage!

Additionaly, it accelerates Innes' Special trigger. This puts Glimmer on a cooldown count of 1. This means that you can consistently neutralize damage reduction skills if you choose to stick with Glimmer.

Requires investment to be a solid option

Young Innes is expected to have a solid statline, couple that with the very powerful Bow of Frelia, he makes for a very solid unit whom you can certainly build around. However, he needs a lot of additional pieces as Swift Sparrow 2 is easily outclassed, and Distant Guard 3 fulfills a function that is best put on a supporting unit. If you wish to use Innes in competitive game modes such as the Arena, you may want to get additional pieces onto him first.

Young Innes as a Source Hero

Young Innes can be used to inherit Swift Sparrow 2 or Distant Guard 3. However, you can only acquire Young Innes from Tempest Trials or from using Heroic Grails, so think carefully before foddering him off.

Young Innes possesses a very powerful weapon in Bow of Frelia, you might want to built a strong copy before thinking about making him into fodder!

How to Get Young Innes / Illustrations / Voice Actor / Quotes

How to Get Young Innes

Young Innes is a limited time Hero who can be obtained as a reward for your score in the Tempest Trials. They do not appear in regular summons. After the event has ended, they can be obtained by using Heroic Grails.

Register as a member and get all the information you want. (It's free!)
Login
Opinions about an article or post go here.
Opinions about an article or post
We at Game8 thank you for your support.
In order for us to make the best articles possible, share your corrections, opinions, and thoughts about "Young Innes Builds and Best IVs" with us!
When reporting a problem, please be as specific as possible in providing details such as what conditions the problem occurred under and what kind of effects it had.