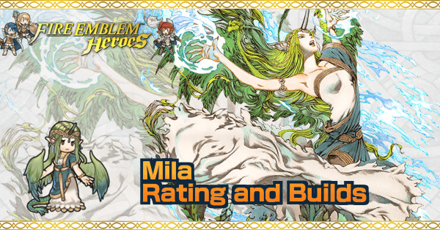 This is a ranking page for the hero Mila - Goddess of Love from the game Fire Emblem Heroes (FEH). Read on to learn the best IVs (Individual Values), best builds (Inherit Skill), weapon refinement, stats at Lv 40, and more for Mila.

Mila's best IVs are +Def and -Spd. With a superboon in Def, Mila gains Def+4 with a +Def IV, maxing out her already impressive Def stat. Additionally, one of the effects Mila's Turnwheel depends on Mila having a high Def so it additional stats in Def is always helpful. Her Spd is not really important for her so it can be taken a dump stat.

You can also take a +Res IV to make Sabotage Atk easier to trigger. Having a higher Res also makes Mila less susceptible to the effects of skills like Atk Ploy.

If you are trying to build a +10 Merge Mila, +Res is the best IV. With a +10 merge, Mila's Def reaches 48. At this point, you can already inflict Isolate on most dancers common in Aether Raids, including the very common and meta unit, L!Azura. Thus, it is better to raise Res at this point to make the activation of Sabotage 3 easier.

Mila is a close magic attacker (range = 1). Therefore, when not accounting for the Weapon Triangle, the amount of damage she deals will be equivalent to her Atk minus the foe's Res stat.

A Mythic Hero who can boost allies' HP and Def

Buff to all Stats in a Wide Area

Nurturing Breath grants +2 to all stats for all allies in a 7x7 area around Mila. This is very easy to apply to all of your units. Mila also has access to Rally Def/Res+ which allows her to buff up her allies even more! If her allies have other active buffs, you can more stack buffs to make your team very strong, which is especially important in modes like Aether Raids and Arena.

Mila's C skill, Mila's Turnwheel inflicts Isolation in cardinal directions of her if the foe's Def is lower than hers. Isolation prevents units from receiving or using assist-type skills. This is great for modes like Arena and Aether Raids to counter the many teams that rely on L!Azura's powerful Prayer Wheel.

In addition to Isolation, Mila's Turnwheel also grants you an additional turn in Aether Raids offense. This significantly increases your chances of raiding other people's keeps successfully.

Mila has a low Spd stat, so she is susceptible to follow-up attacks. Her durability is high, so she won't not be taken out easily. However, follow-up attacks still speed up specials so be on the look for powerful specials like Moonbow and Aether.

Mila takes 1.5x damage from dragon-effective weapons like Falchion, and one blow from this type of weapon will do tons of damage to her. Make sure you know what weapons you are up against before hopping too far into the line of battle!
Heroes with Effective Skills

Physical powerhouses, preferably those who are strong in Aether Raids

She shares the same season with Peony, Freyja, and Eir. This makes them ideal raiding buddies for Mila.

Mila is really bulky. Since both her stats are high, units that have some kind of effectiveness against her will be effective in dealing with Mila.

Naga's weapon is strong against dragons too, but she also has her exclusive Divine Fang that grants a dragon-effective bonus to her allies so watch out for her in Aether Raids!

If set properly, Seliph on Aether Raids defense can delay a raiding team's win by 1 turn. This effectively cancels Mila's ability to add a turn into the fray. This is because of Tyrfing's special effect refine.

Tyrfing's special refinement is good in Aether Raids as it can cost the enemy an additional turn to take Seliph down—a turn that can mean victory for your Aether Raids team.

Mila - Goddess of Love Only Appears as a 5 Star Hero!

Mila as a Source Hero 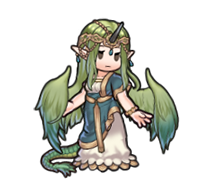 Mila can be used to inherit the skill Bracing Stance 3. However, Mila is a powerful hero who is ideal for Aether Raids. We recommend training and building around her instead for use in Aether Raids.

How to Get Mila / Illustrations / Voice Actor / Quotes

How to Get Mila

Mila is a limited time Hero who can be pulled from a Mythic Hero Summoning event. They do not appear in regular summons.

Register as a member and get all the information you want. (It's free!)
Login
Opinions about an article or post go here.
Opinions about an article or post
We at Game8 thank you for your support.
In order for us to make the best articles possible, share your corrections, opinions, and thoughts about "Mila Builds and Best IVs" with us!
When reporting a problem, please be as specific as possible in providing details such as what conditions the problem occurred under and what kind of effects it had.