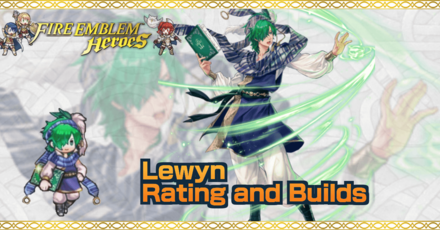 This is a ranking page for the hero Lewyn - Guiding Breeze from the game Fire Emblem Heroes (FEH). Read on to learn the best IVs (Individual Values), best builds (Inherit Skill), weapon refinement, stats at Lv 40, and more for Lewyn.

The best IVs for Lewyn are +Spd and -Res. His kit revolves around eliminating enemies with a follow-up attack before they can retaliate through the effects of Forseti. Therefore, it is best to supplement his Spd with a +Spd IV. His Def is extremely low and is a superbane, so it is safer to take a bane in Res instead.

We recommend a +Atk IV when merging Lewyn to 10. Lewyn's Spd stat will reach 44 with 10 merges, which is already very powerful combined with the effects of Forseti, so at that point it would be better to focus on upping damage per attack.

We recommend the Special Effect Refine for Forseti

The trigger condition is very easy to meet and not only does it grant a hefty +4 Atk/Spd bonus, but it also creates a gap in Atk/Spd that makes it easier for Lewyn to score the outspeed as it neutralizes Atk/Spd penalties on him and clears Atk/Spd bonuses on the opponent.

It is easy to use, and it has direct synergy with his kit. If you can afford it and you constantly use Lewyn in maps, you should definitely get it!

Lewyn is a ranged magic attacker (range = 2). Therefore, when not accounting for the Weapon Triangle, the amount of damage he deals will be equivalent to his Atk minus the foe's Res stat.

Forseti, Lewyn's personal weapon, allows him to make a follow-up attack before the enemy makes a counterattack, provided that his HP is at least 50%. It is similar to Brave weapons or Reinhardt's Dire Thunder, which allows them to do extra attacks. This makes Lewyn a very powerful player phase unit.

Lewyn has access to Swift Sparrow 2 and Odd Atk Wave 3. If he attacks on odd-numbered turns, he gets a total of +10 Atk + 4 Spd, making Lewyn a very powerful player phase attacker, when especially on odd-numbered turns. These effects, when combined with Forseti and the Special Spiral boosted Glimmer, can potentially enable Lewyn to take out units without getting damaged by counterattacks.

He will also have access to an additional +4 Atk/Spd and an ability to neutralize Atk/Spd penalties on him and Atk/Spd bonuses on his foe if he gets Forseti's special effect refine. The gap in Spd created by this further makes it easier for him to land two consecutive attacks.

Special Spiral 3 grants cooldown count -2 everytime Lewyn's special triggers. If you stick with Lewyn's native special, Glimmer, you can activate it every time you attack after its first activation as it only has a cooldown count of 2. Being able to consistently trigger a special is one of Lewyn's greatest strengths.

Lewyn has the unique ability of making a follow-up attack before the enemy counterattacks. It is pretty similar to how Dire Thunder or Brave weapons work. However, it still depends on Spd, as it is not an extra attack. If Lewyn does not have the Spd required to execute a follow-up attack, then Forseti's efffects will be wasted.

Because it is a follow-up attack, effects that cancel said attacks also prevent Forseti's effects from activating. This includes skills like G Tomebreaker.

Should you Unlock Potential for Lewyn?

Lewyn - Guiding Breeze Only Appears as a 5 Star Hero!

Lewyn as a Source Hero

Lewyn can be used to inherit the skill Special Spiral 3. However, Lewyn is a very powerful tome unit who can take out many enemy units in the game. We recomend building and training Lewyn instead.

How to Get Lewyn / Illustrations / Voice Actor / Quotes

How to Get Lewyn

Lewyn is a Hero who can be pulled from any summon.

Register as a member and get all the information you want. (It's free!)
Login
Opinions about an article or post go here.
Opinions about an article or post
We at Game8 thank you for your support.
In order for us to make the best articles possible, share your corrections, opinions, and thoughts about "Lewyn Builds and Best IVs" with us!
When reporting a problem, please be as specific as possible in providing details such as what conditions the problem occurred under and what kind of effects it had.