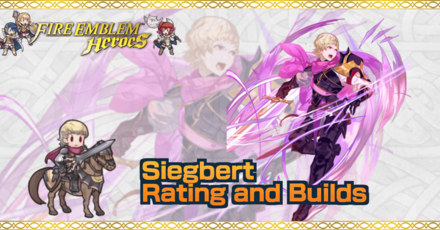 This is a ranking page for the hero Siegbert - Future King from the game Fire Emblem Heroes (FEH). Read on to learn the best IVs (Individual Values), best builds (Inherit Skill), weapon refinement, stats at Lv 40, and more for Siegbert.

The best IVs for Siegbert are +Spd and -Res. A higher Spd stat allows Siegbert to prevent follow-up attacks and gain more follow-up attacks on his own. This boosts both his offensive and survivability capabilities. His Res is very low, so it is ideal for a dump stat.

We recommend the Special Effect Refine for Dark Greatsword

Siegbert's playstyle is to buff allies at the start of the turn using Atk Tactic 3 and head on to attack enemy units to enjoy the Spd+4/Atk+10 from his skills when he initiates combat. Dark Greatsword's special effect refine is synergistic to his playstyle, as it adds an additional +4 Atk/Spd to him when he is not adjacent to allies in combat. If you use him to attack first, then you will be able to trigger it most of the time, allowing you to enjoy a whopping Spd+8/Atk+20 if Dark Greatsword, Death Blow 3 and Atk Tactic 3 are all triggered.

Siegbert is a close physical attacker (range = 1). Therefore, when not accounting for the Weapon Triangle, the amount of damage he deals will be equivalent to his Atk minus the foe's Def stat.

Dark Greatsword and Death Blow 3 combine for a +10 Atk, + 4 Spd whenever Siegbert initiates combat with a foe. This makes him a decent player phase unit that can take out many kinds of foes.

Atk Tactic 3 grants +6 Atk to allies within 2 spaces if the number of the ally's movement type in the team is ≤ 2. This makes Siegbert a good unit in mixed teams such as the example above that features 2 cavalry units and 2 infantry units.

Siegbert's Res stat is very low and many magic units can take him out in just one strike. Be mindful of Siegbert's positioning in relation to magic users, especially blue tome units whom he is weak against. Do not attempt to engage with magic foes, unless you will definitely be able to take them out, or if Siegbert has a way of disengaging such as Reposition or Dance from an ally.

Should you Unlock Potential for Siegbert?

Siegbert - Future King Only Appears as a 5 Star Hero!

Siegbert as a Source Hero

All of Siegbert's inheritable skills can be inherited from a 4 Star unit instead. Foddering off Siegbert, a 5 Star unit, just for those skills would be kind of a waste, so for the most part, you should select the Siegbert with the best IVs and merge any duplicates you pull.

How to Get Siegbert / Illustrations / Voice Actor / Quotes

How to Get Siegbert

Siegbert is a Hero who can be pulled from any summon.

Register as a member and get all the information you want. (It's free!)
Login
Opinions about an article or post go here.
Opinions about an article or post
We at Game8 thank you for your support.
In order for us to make the best articles possible, share your corrections, opinions, and thoughts about "Siegbert Builds and Best IVs" with us!
When reporting a problem, please be as specific as possible in providing details such as what conditions the problem occurred under and what kind of effects it had.