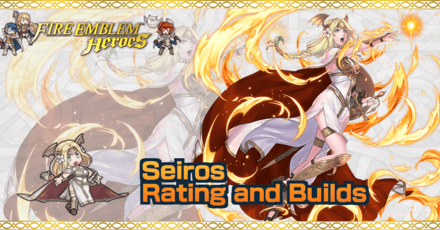 This is a ranking page for the hero Seiros - Saint of Legend from the game Fire Emblem Heroes (FEH). Read on to learn the best IVs (Individual Values), best builds (Inherit Skill), weapon refinement, stats at Lv 40, and more for Seiros.

The best IVs for Seiros are +Res and -Spd. Seiros' kit revolves around the Res stat, and it is discussed in the Strengths and Weaknesses section. Glacies, Dragon Wall 3, her stat distribution and her overall playstyle relies on Res so it is no-brainer to take it. Her Spd is very low and is only less importance so it is safe to take as a bane. She relies on her skills to score follow-up attacks so do not worry about not landing follow-up attacks.

Be warned as Spd is a superbane, but it does not really matter as she does not rely on it at all.

This is for the same reason as above. The importance of her Res stat cannot be overlooked. With this IV, she reaches 47 Res at +10 Merges. At this point, it allows her to take lots of damage through damage calculation and through the effects of Dragon Wall 3. If you plan to replace Dragon Wall with another skill, you can go for a +Def or a +Atk IV instead.

Distant Counter will be used in conjuction with Quick Riposte 3 so Seiros can double regardless of range. For Aether Raids Defense, she can take less damage with Distant Guard 3, though she can also make use of Joint Drive skills to buff her allies. However, you can just opt for her default Wings of Light if you have Mythic Heroes on your team.

This build uses little skill inheritance. Since Seiros' skills are good already on their own, you can give her any Assist skill. Giving her Quick Riposte as a Sacred Skill will enable her to double when she is attacked.

Seiros is a close magic attacker (range = 1). Therefore, when not accounting for the Weapon Triangle, the amount of damage she deals will be equivalent to her Atk minus the foe's Res stat. However, because of the effects of Aurora Breath, she will use the Def stat to calculate damage if it is lower than the foe's Res stat.

Seiros is a Mythic Hero who will grant you an Anima Blessing when summoned. During Anima Season, Seiros' allies who also have a Anima Blessing will receive a HP+5 and Atk+3 to their stats, increasing the party's viability.

Seiros gets a lot of bonuses from her skills when initiating combat so she should initiate attacks whenever possible! The bonuses are as follows:

This is a total of +12 Atk, +10 Res, a guaranteed follow-up attack, and the ability to block enemy follow-ups.

Combined with Aurora Breath's adaptive damage where the lower defensive stat of a foe is used for damage calculations, Seiros gets a lot of power boosts, both offensive and defensive, simply by initiating attacks. 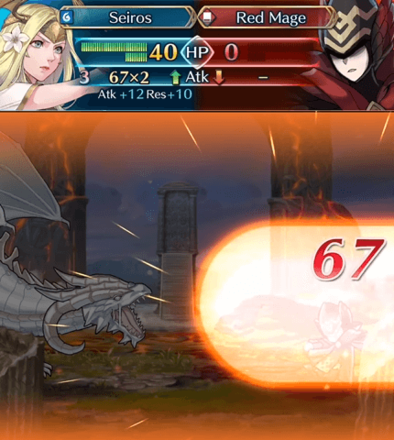 Seiros' +12 Atk, +10 Res boost and the guaranteed follow-up attack reflects in this battle against a red mage.

Great defensive bonuses in both phases

In the player phase, Seiros takes advantage of Mirror Impact's +10 Res boost and follow-up block to help her survive encounters.

In addition to these, her B skill, Dragon Wall, reduces the damage she takes from attacks and AoE specials depending on how much Res she has over her opponent. This damage reduction works on both phases so it helps with her bulk on all fronts! 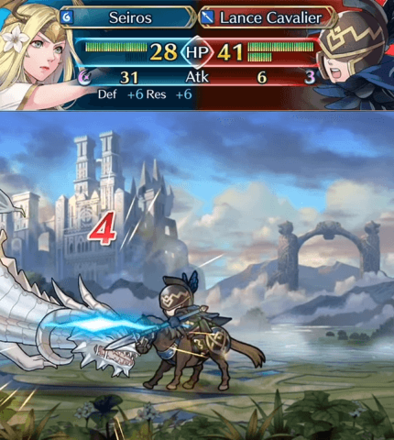 The calculated damage is at 6, but Seiros only takes 4 damage because of Dragon Wall

In addition to helping Dragon Wall reduce more damage, stacking Res will also allow Seiros to deal more damage through Glacies! This means Seiros' Res can be very valuable. Do your best to stack this helpful stat on Seiros.

Wings of Light provides +1 Atk/Spd/Def/Res to all Mythic allies on turn 1, +2 Atk/Spd/Def/Res on turn 2 and so on up until turn 5. It can grant a huge power boost for your whole team especially at turns 4 and 5. If you can, work around the effects of this skill to easily take on the most powerful of enemies in the map!

This is very helpful in Aether Raids as it is not uncommon to run multiple Mythic heroes and battles are limited to 7 turns anyway.

Wings of Light is somewhat situational

Wings of Light does provide massive boosts as discussed, but it only applies to allied Mythic heroes. It also only works in the first 5 turns, peaks at the 5th turn, then disappears completely.

Seiros is also unaffected by the bonuses so she needs allied Mythic heroes to shine most.

Seiros takes 1.5x damage from dragon-effective weapons like Falchion, Naga, or Ífingr. One blow from these types of weapons is sure to take her down if the opponent's enemy unit is well invested.

She is also weak to those running Ruptured Sky as their Special, as it deals 40% more damage to her due to her being a dragon.

Make sure you know what weapons you are up against before hopping too far into the line of battle!

Since Seiros will mostly be used in Aether Raids Defense to be able to slot in a 7th character, she will synergize well with fellow Anima mythics like Thrasir. Legendary Eliwood can also provide massive buffs through his weapon that grants the bonus doubler effect.

Ideally, she will be remaining on the backline, buffing her teammates, though she can still attack if need be, getting pretty far across the map the team has a dancer inherited with Ground Orders.

As a dragon, Seiros is weak to weapons that are effective against dragons.

Brave Edelgard can reduce Seiros' damage by 80% if Seiros attacks her, as well as debuffing her with her weapon.

Legendary Edelgard can prevent Seiros from counterattacking due to her weapon and has a guaranteed follow up with her skill Raging Storm.

Brave Hector, meanwhile, has his own sheer bulk that Seiros will have to get through, not to mention his weapon refine that not only debuffs her, but also prevents her from making follow up attacks.

Seiros - Saint of Legend Only Appears as a 5 Star Hero!

Seiros as a Source Hero

Seiros can be used to inherit Mirror Impact or Dragon Wall 3. If you are able to inherit Mirror Strike 2 from another unit, you can get both skills from Seiros! However, Seiros is a powerful Mythic hero whom you can only get from specific banners. Please think carefully before fodderring her off as she will definitely help you a lot in Aether Raids.

How to Get Seiros / Illustrations / Voice Actor / Quotes

How to Get Seiros

Seiros is a limited time Hero who can be pulled from a Mythic Hero Summoning event. They do not appear in regular summons.

You're using the icon of "Swift sparrow" for "Mirror impact", you can clearly see the colour difference below "Passives" when comparing it to "Mirror Strike 1/2". Just wanted to point that out.

Register as a member and get all the information you want. (It's free!)
Login
Opinions about an article or post go here.
Opinions about an article or post
We at Game8 thank you for your support.
In order for us to make the best articles possible, share your corrections, opinions, and thoughts about "Seiros Builds and Best IVs" with us!
When reporting a problem, please be as specific as possible in providing details such as what conditions the problem occurred under and what kind of effects it had.