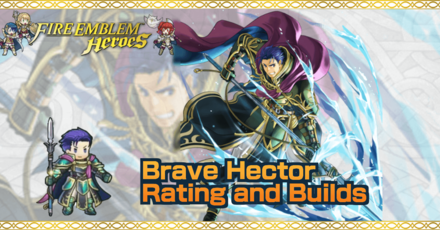 This is a ranking page for the hero Hector - Brave Warrior from the game Fire Emblem Heroes (FEH). Read on to learn the best IVs (Individual Values), best builds (Inherit Skill), weapon refinement, stats at Lv 40, and more for Brave Hector.

The Best IVs for Brave Hector are +Def and -Spd. With his superboon in Def, Brave Hector gains Def+4, making him a powerful tank, and also making Maltet's follow-up effect even easier to trigger. Since he will gain a guaranteed follow-up regardless of his Spd, this is the ideal dump stat.

If you are trying to merge a +10 Brave Hector, we recommend +Res. +Res patches up his weakest stat and vastly improves his survivability. His Atk and Def will be more than sufficient to get the job done.

This build utilizes Maltet's refine, paired with Special Fighter, his Special will be at 2 charge so it will always trigger. Mystic Boost 3 will keep him healthy and guarantees that Hector does not die, while he debuffs enemy units with Atk Smoke.

This build utilizes Brave Hector's superior tanking prowess with his refined Maltet and Ostian Counter to protect his allies with A/R Far Save 3. Special Fighter 3 slows down enemy special charges while guaranteeing his Bonfire activates every combat. Mystic Boost 3 keeps him healthy as he absorbs attacks from multiple opponents. A +res boon is preferred to boost his lower defensive stat against the overabundance of mages in Aether Raids; a +atk boon may also be used if Hector is surrounded by multiple support units.

We highly recommend the Special Effect Refine for Maltet

Giving him a Special like Sol or Noontime or equipping the Mystic Boost Sacred Seal will ensure that he stays healthy to keep within the HP requirements of his weapon.

Brave Hector is a close-range physical attacker. When the effects of the Weapon Triangle are not taken into account, the damage he deals will be equal to his Atk minus the foes's Def. Additionally, he has a skill that allows him to counterattack at any range.

Brave Hector's exclusive weapon Maltet gives him a guaranteed follow-up attack when the foe initiates combat. This will happen regardless of the difference in Spd between units, so being able to easily dish out extra damage when attacked is a big strength of Hector.

Guaranteed follow-up when he initiates combat as well

Can counterattack regardless of range

Hector's A skill Ostian Counter will let him counterattack ranged foes such as bow and tome users. This skill is essentially a more powerful version of Distant Counter, which lets him easily turn the tables on foes who attack Hector.

Allies who are dedicated support units

Brave Hector greatly appreciates dedicated support units to turn him into an unbreakable wall for your team. Heroes such as Corrin (M), Brave Lucina, and Bow Hinoka improve his combat potential with invisible buffs, while Flayn improves his survivability by providing damage reduction on top of Brave Hector's already absurd defenses as well as healing him with her staff.

Allies who can boost mobility

As an armored unit, Brave Hector can only move one space at a time. Therefore, party members with Guidance and Armor March are very useful for helping Hector get across the map. In particular, a hero with a refresher skill who can equip these mobility skills such as New Year Peony, or the Sacred Seal Armored Boots can significantly increase Hector's mobility.

Despite his incredible Def, Brave Hector is still susceptible to attacks from foes with weapons that are effective on armored units. Summer Caeda and Pirate Hinoka have color advantage on top of armor effectiveness and you will often encounter many +10 merged versions in PvP modes; if they survive an attack from Hector, they will likely be able to wipe him out afterward, so leave these foes to another ally.

Take note that this weakness is removed if Brave Hector has his refined Maltet equipped.

As an armored unit, Brave Hector is unable to equip Null C-Disrupt 3, and thus is vulnerable to effects that prevent him from counterattacking. In particular, heroes like Veronica and Maribelle who all possess Dazzling Staff 3 while attacking Brave Hector's lower Res stat are especially threatening to his survivability.

Young L'Arachel deserves a special mention due to her Staff of Rausten which applies the Flash status from a distance, allowing all of her teammates to gang up on Brave Hector safely and take him out despite his insane survivability.

Heroes who also commonly carry the Null Follow-Up and Windsweep combo through their weapons and B slots such as Legendary Byleth (M) and Selena also greatly threaten Brave Hector by preventing his counterattacks and attacking twice, denying his follow-up negation and winning Spd checks.

How to Use and Defeat Brave Hector

For a more in-depth explanation on how to use and defeat Brave Hector, check out our guide below!

How to Use and Defeat Brave Hector — a fleshed out discussion!

Hector - Brave Warrior Only Appears as a 5 Star Hero!

Brave Hector as a Source Hero

Brave Hector can be used to inherit Bold Fighter or Even Res Wave. However, Brave Hector is a very powerful blue armored unit, so for the most part, you should get these skills elsewhere and merge any Hector duplicates you pick up. Even Res Wave is obtainable as a Sacred Seal as well.


How to Get Brave Hector / Illustrations / Voice Actor / Quotes

How to Get Brave Hector

Brave Hector is a Hero who can be pulled from any summon.

Register as a member and get all the information you want. (It's free!)
Login
Opinions about an article or post go here.
Opinions about an article or post
We at Game8 thank you for your support.
In order for us to make the best articles possible, share your corrections, opinions, and thoughts about "Brave Hector Builds and Best IVs" with us!
When reporting a problem, please be as specific as possible in providing details such as what conditions the problem occurred under and what kind of effects it had.