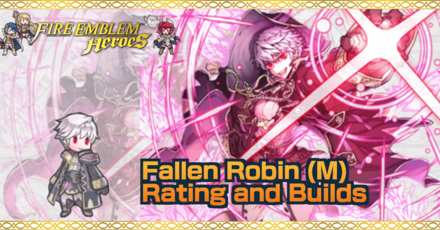 This is a ranking page for the hero Robin - Fell Reincarnation from the game Fire Emblem Heroes (FEH). Read on to learn the best IVs (Individual Values), best builds (Inherit Skill), weapon refinement, stats at Lv 40, and more for Fallen Robin (M).

The best IVs for Fallen Robin (M) are +Res and -HP. Having a +Res IV would balance his defensive stats, allowing him to deal with a wide variety of enemy units. Taking it as a boon also avoids the superbane penalty that his Res stat has. His HP is of less importance because of the balanced defensive stats so it is safe to take it as a bane. If you are in need of a more offensive unit, you can also take a +Atk/-Spd or -HP Fallen Robin (M).

This is a budget build for Fallen Robin (M).

This build utilizes the effects of refined Expiration to turn Robin into a formidable tank. Refined Expiration has a built-in Guard effect to halt enemy specials, while the rest of the skills are aimed at enhancing Robin's defensive prowess. Vengeful Fighter ensures that Robin performs a follow-up attack and triggers his special faster on enemy phase. Sol is used to help sustain Robin throughout multiple engagements.

We recommend the Special Effect Refine for Expiration

Expiration's refine grants Atk/Spd/Def/Res+4 and Special cooldown charge-1 on his target per attack.

We recommend getting this refine because it will boost his stats and will also slow down an enemy unit's Special.

This means that he will be able to trigger his Special sooner without fearing of taking lots of damage from his target's own Special.

Fallen Robin (M) is a close magic attacker (range = 1). Therefore, when not accounting for the Weapon Triangle, the amount of damage he deals will be equivalent to his Atk minus the foe's Res stat.

Receive Buffs for both Dragon and Armored Units

Because Fallen Robin is both a dragon and an armored unit, he can receive class-specific and movement-specific buffs at the same time. Ward Armor and Fortify Dragons are examples of good buffs that he can receive. Unlike Myrrh, he can also inherit Steady Breath as he is an armored type unit.

Counterattacks Regardless of Range

Expiration has the built-in effect of Distant Counter, which allows Fallen Robin to counterattack foes regardless of distance. Because of this, he can counterattack any foe if it does not have a skill that prevents counterattacks.

Additionally, Expiration also calculates damage on a ranged foe using the stat which is lower between Def and Res. This makes Fallen Robin a powerful character against ranged units that have imbalanced defenses.

The refine version of his weapon also gives him Atk/Spd/Def/Res+4 and will inflict Special cooldown-1 to his target, slowing down an enemy unit's Special trigger.

This allows him to keep up his bulk and pairs well with Vengeful Fighter 3.

Provided that Fallen Robin (M)'s HP is atleast 50%, he will make guaranteed follow-up attacks, and is granted special cooldown charge +1 per attack whenever the enemy attacks him. It is similar to the effect of Quick Riposte.

Vengeful Fighter 3 combined with Fallen Robin's kit makes him a very deadly unit in the enemy phase even if he has low speed. Make sure to pair him up with a healer for you to always meet the trigger condition.

Fallen Robin's C skill, Ward Dragons grants +4 Def/Res to all dragon allies within 2 spaces of Fallen Robin (M). This allows him to provide some defensive support in all-dragon teams.

Fallen Robin (M) takes 1.5x damage from armor-effective weapons like Armorslayer+, and one blow from this type of weapon will hurt him a lot. Make sure you know what weapons you are up against before hopping too far into the line of battle!
Heroes with Effective Skills

Fallen Robin (M) takes 1.5x damage from dragon-effective weapons like Falchion, and this type of weapon can be devastating. Keep away from anti-dragon units like L!Marth or Alm.

Robin - Fell Reincarnation Only Appears as a 5 Star Hero!

Fallen Robin (M) can be used to inherit the skill and Vengeful Fighter 3. However, Fallen Robin (M) is a very powerful hero so we recommend training and building around him instead.

How to Get Fallen Robin (M) / Illustrations / Voice Actor / Quotes

How to Get Fallen Robin (M)

Fallen Robin (M) is a Hero who can be pulled from any summon.

Register as a member and get all the information you want. (It's free!)
Login
Opinions about an article or post go here.
Opinions about an article or post
We at Game8 thank you for your support.
In order for us to make the best articles possible, share your corrections, opinions, and thoughts about "Fallen Robin Builds and Best IVs" with us!
When reporting a problem, please be as specific as possible in providing details such as what conditions the problem occurred under and what kind of effects it had.