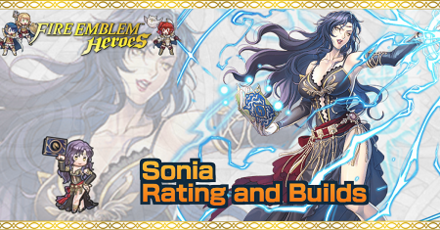 This is a ranking page for the hero Sonia - Inhuman Beauty from the game Fire Emblem Heroes (FEH). Read on to learn the best IVs (Individual Values), best builds (Inherit Skill), weapon refinement, stats at Lv 40, and more for Sonia.

As a hero obtainable only through Grand Hero Battle, Sonia will always have neutral IVs by default. The only way to access IVs for this unit is through using Trait Fruits.

The best IVs for Sonia are +Atk/Spd. Because her Spd stat is already low, it's good to have it as a bane and increase her Atk.

With the Quick Riposte 3 seal, she'll potentially be able to tank and counterattack ranged enemy units.

However, because Sonia's not a very powerful unit to begin with, we recommend not investing a Trait Fruit in her to change her stats.

If you are merging Sonia, it's recommended to increase her Spd. This, at least, will get her to 32 Spd at +10, and reinforcing this with skills and Seals will allow her to potentially double enemy units.

If you would like to focus on one-shotting enemy units, you can +Atk her instead.

By inheriting an inexpensive Guard 3, Sonia is able to achieve more bulk as there won't be as much Special attacks hitting her. The Quick Riposte 3 Sacred Seal is good on her as it provides her a way to nail in follow-up attacks in the enemy phase.

This build requires more investment, but makes Sonia a good tank due to her high stats. Use either the Def or Res refine of Pact Blooms+ depending on the type of tank you want her to be. The Quick Riposte 3 Seal is required on her so that she makes a guaranteed follow-up attack.

Compared to the budget Sonya build, this requires premium fodder—but it is way more both offensive and defensive ends. Pact Blooms+ can easily be obtained from another free unit Valentine's Veronica so the only expensive skills you need to get are Lull Atk/Res 3 and Joint Drive Atk. If you can't afford Joint Drive Atk, Odd Atk Wave 3 can work as a cheaper substitute.

Note: Sonia's stats will always have no IVs.

Sonia is a ranged magic attacker (range = 2). Therefore, when not accounting for the Weapon Triangle, the amount of damage she deals will be equivalent to her Atk minus the foe's Res stat.

Sonia has very high Def and Res, which makes her a good candidate as a tank if you would like to build her as such.

Giving her Close Counter will enable her to tank both melee and ranged units and counterattack.

Lack of a Prf Weapon Makes Her a Mediocre Unit

Since Sonia does not have a Prf weapon, she will have a hard time scoring high in the Arena and is easily powercrept by other mages.

Brunnya, for instance, is just as tanky and comes with a Prf weapon of her own.

If you do like Sonia, however, you can inherit Pact Blooms+ on her instead of using her default weapon, so she can give herself some survivability.

Despite being tanky, Sonia possessed low Spd, making her easily doubled by a lot of other units.

You can mitigate this by giving her Quick Riposte 3, so she can make a follow-up attack.

We Do Not Recommend Unlocking Potential for Sonia - Inhuman Beauty!

Sonia as a Source Hero

How to Get Sonia / Illustrations / Voice Actor / Quotes

How to Get Sonia

Sonia is a Hero who, for a limited time, can be obtained through completing a Grand Hero Battle for the first time. They do not appear in regular summons. After the event has ended, they can be obtained by using Heroic Grails.

Register as a member and get all the information you want. (It's free!)
Login
Opinions about an article or post go here.
Opinions about an article or post
We at Game8 thank you for your support.
In order for us to make the best articles possible, share your corrections, opinions, and thoughts about "Sonia Builds and Best IVs" with us!
When reporting a problem, please be as specific as possible in providing details such as what conditions the problem occurred under and what kind of effects it had.