This is a guide to understanding how Individual Values (IVs) work in Fire Emblem Heroes (FEH). Learn what IVs do, how to check a unit's IVs, and how you can change a unit's IVs.

How to Change IVs 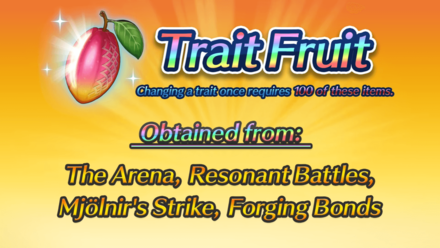 With the September 2020 update, you can now change a unit's IVs with Trait Fruits.

Trait Fruits will allow you to change the IVs of all Free Units and units obtained from the Hall of Forms, making them stronger!

However, you will need 100 Trait Fruits in order to change a unit's IVs, so be mindful of which one you choose. You can change the IVs of either your favorite or most powerful units!

In Fire Emblem Heroes, every individual unit pulled from a banner has what are known as Individual Values (IVs). When IVs differ between units, the same hero can have different stats after reaching its max level.

A Raised Stat and a Lowered Stat

There exists a basic set of stats for every hero in the game (known as base stats). IVs cause one of a hero's base stats to rise by 3~4 points and another to lower by 3~4 points.

Lv 40 Base Stats for All Units

5★ heroes can have stats that are strong or weak (these are not present for 4★ heroes and lower). When a unit has this strong stat (called a superboon) as its IV, it will result in +4 points to the base value. Likewise, when a unit has a superbane (lowered IV) in a weak stat, the value will be 4 points lower than the base stat.

When a hero receives both a superboon and a superbane, the resulting change will be ±4.

Stats will differ depending on IVs! 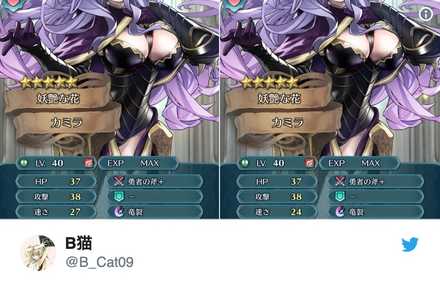 Comparison of Camilla: Bewitching Beauty's Stats at the Max Level

This side by side of Camilla's stats was sent in by a user through Twitter. We can use it to compare possible stats for this hero.

When a hero reaches the max level, the difference in IVs will be very significant!

How to Check IVs

Check on the Stats Screen 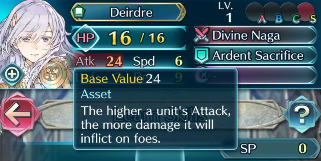 Deirdre's asset is shown here in blue (Atk). Her flaw (HP) is displayed in red.

You can check a hero's IVs via the stats screen. A stat name, such as HP or Atk, will be written in blue when it is an asset, and red when it is a flaw.

Since the color may be a bit difficult to see, you can always press the place where the stat is shown and asset or flaw will be displayed. 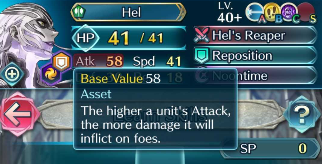 Because Hel has been merged, any flaws have disappeared and only her asset remains (Atk).

When you Merge Allies, the flaw will disappear, so only the asset written in blue will remain for that hero. When a hero's stats show neither blue or red letters, this unit has base values (no IVs).

You must first turn the feature on through settings.

You can also check with the IV calculator tool.

It is also possible to check a hero's IVs through the IV calculator tool. However, this method can only be used when the hero is at level 1 or level 40.

Can You Choose IVs?

For units only obtainable through summons, it is very difficult to obtain the IVs that you want.

Units obtained through Quests & Missions as well as Grand Hero Battles will always have base stats, meaning you cannot select their IVs either.

You would need to pull from many summons in order to get a 5★ unit with the IVs you want, so we recommend that you select a 4★ or 3★ hero with the IVs you want, unlock their potential, and build them instead. Additionally, you can pull a 5★ and use Trait Fruit to change their IVs, but since ths is a limited resource, you should use it very sparingly.

Post (2 Comments)
Opinions about an article or post go here.
Opinions about an article or post
We at Game8 thank you for your support.
In order for us to make the best articles possible, share your corrections, opinions, and thoughts about "IVs Explained: How to Check IVs" with us!
When reporting a problem, please be as specific as possible in providing details such as what conditions the problem occurred under and what kind of effects it had.