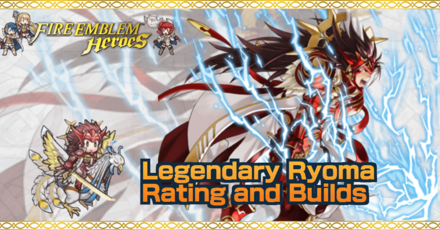 This is a ranking page for the hero Ryoma - Supreme Samurai from the game Fire Emblem Heroes (FEH). Read on to learn the best IVs (Individual Values), best builds (Inherit Skill), weapon refinement, stats at Lv 40, and more for Legendary Ryoma.

The best IVs for L!Ryoma are +Spd and -HP. A higher Spd stat allows L!Ryoma to prevent follow-up attacks and help him make follow-up attacks on his own. This boosts both his offensive and survivability capabilities. L!Ryoma's HP is of much less importance, so it is safe to take as a bane.

A low budget build that utilizes Ryoma's news skills. Thanks to Bushido II and Atk/Spd Rein 3, he is now a bit more viable in both phases of battle.

This is a high budget build that takes advantage of Raijinto's refine and ups Ryoma's firepower by giving him more Atk/Spd with Swift Sparrow stacking.

We recommend the Special Effect Refine for Raijinto

We recommend getting this refine as he will be able to go toe to toe with units like Fallen Edelgard or Fallen Corrin (M).

L!Ryoma is a close physical attacker (range = 1). Therefore, when not accounting for the Weapon Triangle, the amount of damage he deals will be equivalent to his Atk minus the foe's Def stat.

Legendary Ryoma is a Water-Type Legendary Hero, and when summoned, you will receive a Water Blessing. During Water Season, allies who appear in a team alongside L!Ryoma will gain HP+3 and Def+4 when they have been given a Water Blessing.

Can Counterattack Regardless of Distance

Raijinto provides L!Ryoma the ability to counterattack enemy units regardless of their range. Because of his access to Glimmer, Bushido, and Kestrel Stance 2, he can be a decent enemy phase unit if you are able to buff his somewhat low defensive stats.

Bushido II not only neutralizes any effective against flying bonuses against Ryoma, but also reduces damage from enemy units if his Spd is higher.

This is good because Ryoma can tank more hits and will be able to survive ranged attacks.

Atk/Spd inflicted onto a wide area

Legendary Ryoma's C skill, Atk/Spd Rein 3 inflicts -4 Atk/Spd on foes within 2 spaces during combat. It helps both Ryoma and allies as the range is modest and it affects enemies even if Ryoma is not directly part of combat. Ryoma's flying movement makes it easy to position him in effectively utilizing this skill. It is an in-combat buff which makes it easy to stack with other debuffs such as Atk Ploy 3.

Guidance 3 allows infantry and armored allies move to an adjacent space to L!Ryoma if they are within 2 spaces of him. This allows armored units to potentially move up to 3 spaces in one turn!

Due to his low Res, Ryoma won't be able to take a lot of hits from blue mage units like Reinhardt or Ophelia, as they'll be able to punch through him even with the damage reduction from Bushido II.

Legendary Ryoma is best ran on an all-flier team. Here are some top fliers in the current meta to pair Ryoma with (2021). Arguably, New year Peony is the best flier support in the game as of late.

Ryoma will be easily taken out by high-powered bow units like Shinon. He will also have trouble dealing with powerful blue attribute units like Brave Hector.

Ryoma - Supreme Samurai Only Appears as a 5 Star Hero!

Legendary Ryoma as a Source Hero

L!Ryoma can be used to inherit the skill Guidance 3. However, L!Ryoma is a powerful Water-type legendary hero that can empower allies during in the Arena, so we recommend training and building around him instead.

How to Get Legendary Ryoma / Illustrations / Voice Actor / Quotes

How to Get Legendary Ryoma

Legendary Ryoma is a limited time Hero who can be pulled from a Legendary Hero Summoning event. They do not appear in regular summons.

Register as a member and get all the information you want. (It's free!)
Login
Opinions about an article or post go here.
Opinions about an article or post
We at Game8 thank you for your support.
In order for us to make the best articles possible, share your corrections, opinions, and thoughts about "Legendary Ryoma Builds and Best IVs" with us!
When reporting a problem, please be as specific as possible in providing details such as what conditions the problem occurred under and what kind of effects it had.