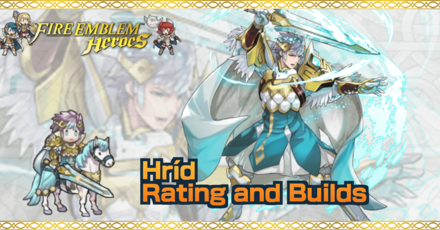 This is a ranking page for the hero Hríd - Icy Blade from the game Fire Emblem Heroes (FEH). Read on to learn the best IVs (Individual Values), best builds (Inherit Skill), weapon refinement, stats at Lv 40, and more for Hríd.

The best IVs for Hrid are +Atk and -Res. With his superboon, a +Atk IV Hrid would have +4 more Atk at Lv. 40, making him that much more powerful. His Spd is already low and it isn't really important for him as his weapon can guarantee follow-up attacks, so it is safe to take Spd as a bane.

We recommend a +Atk IV when merging Hrid to 10. With a +Atk IV, Hrid's Atk stat will reach 64 at 10 merges, allowing him to one-shot many units. If you prefer a tankier build, go for a +Res or a +Def as a base.

This build aims to give Hrid the highest score possible in the Arena. R Duel Cavalry 4 will make up for his low BST, while the rest of the kit has premium skills to help him in triggering his weapon's effects while also contributing to a high score.

This is a general tank build for Hrid for the enemy phase. Having Sol will give him enough sustain, while Sturdy Stance 3 will help him bulk up further when he's attacked. Freezing Seal and Def Smoke 3 will apply the necessary debuffs for his weapon's effects to trigger.

Hrid is a close physical attacker (range = 1). Therefore, when not accounting for the Weapon Triangle, the amount of damage he deals will be equivalent to his Atk minus the foe's Def stat.

Legendary Hríd is a Wind-Type Legendary Hero, and when summoned, you will receive a Wind Blessing. During Wind Season, allies who appear in a team alongside Hrid will gain HP+3 and Def+4 when they have been given a Wind Blessing.

Gjöll grants Atk +3 and guarantees follow-up attacks if the foe has an active penalty. It is very easy to trigger as Hrid has a native debuff skill. Combined with his high Atk, it is easy for Hrid to take out many enemy units. Additionally, Gjöll prevents counterattacks on Hrid.

Has a Strong and reliable Debuff Skill

Freezing Seal inflicts Atk/Spd -6 on the foe with the lowest Res. Since Hrid is reliant on debuffs, if there are no other sources of debuffs on your team, only engage with the enemy affected by Freezing Seal. The power of this skill lies in the fact that it will be cast anywhere, regardless of distance.

Distant Counter allows Hrid to counterattack units regardless of range. This will work on any tome or bow users, provided that those units do not have skills that prevent countertattacks.

Gjöll relies on debuffs to be able to guarantee follow-up attacks. If you fail to debuff an enemy, it is most likely that L!Hríd will fail to take the enemy out. He is vulnerable to follow-up attacks so if he fails to take his enemy out and gets left in the danger zone, he will most likely be taken out.

L!Hríd takes 1.5x damage from cavalry-effective weapons like Ridersbane, and one blow from this type of weapon is sure to take him down. Make sure you know what weapons you are up against before hopping too far into the line of battle!

The effects of Gjöll depends on debuffs. It makes a guaranteed follow-up attack if Hríd's enemy is currently debuffed. Whilst Hríd does have a debuff in Freezing Seal, it is quite limited. It would be best to pair him up with heroes that can provide more reliable debuffs.

Freezing Seal is the key skill in Hríd's kit and triggering it requires 50% HP or above. Having units that can heal Hríd like Veronica on your team will guarantee that Freezing Seal is active most of the time.

L!Hríd has low Res, and magic users, especially blue ones, can exploit it easily. Units to watch out for include Reinhardt and New Year Alfonse. Additionally, even red magic users will deal high damage to L!Hríd so watch out for high Atk red magic units like Kiria and Aversa. Always be mindful of L!Hríd's positioning in relation to the units that possess a threat to him. When L!Hríd is taken out, you lose access to the various buffs that he provides which is especially important in Arena.

Be careful of units that possess Ridersbane or any weapon that is cavalry-effective as they all deal 1.5x damage to L!Hríd. Pay extra attention to Micaiah who has Thani, a cavalry-effective blue tome that can one-shot L!Hríd.

Units that can debuff or nullify buffs

Because of L!Hríd's reliance towards buffs, he is not so good in dealing with foes that have skills like Dull Close 3 and Lull Atk/Spd 3 which both debuff L!Hríd and his allies. Pay close attention to units like Aversa, Garon and Fallen Corrin (F) that have penalty skills like Panic Ploy 3 and Panic+ as they can turn the buffs on L!Hríd and turn them into penalties.

Hríd - Icy Blade Only Appears as a 5 Star Hero!

Hríd as a Source Hero

Hrid can be used to inherit the skill Distant Counter. However, Hrid is a wind-type legendary hero who can lead your allies in the Arena so we recommend building and training him instead.

How to Get Hríd / Illustrations / Voice Actor / Quotes

Hríd is a limited time Hero who can be pulled from a Legendary Hero Summoning event. They do not appear in regular summons.

Register as a member and get all the information you want. (It's free!)
Login
Opinions about an article or post go here.
Opinions about an article or post
We at Game8 thank you for your support.
In order for us to make the best articles possible, share your corrections, opinions, and thoughts about "Hríd Builds and Best IVs" with us!
When reporting a problem, please be as specific as possible in providing details such as what conditions the problem occurred under and what kind of effects it had.