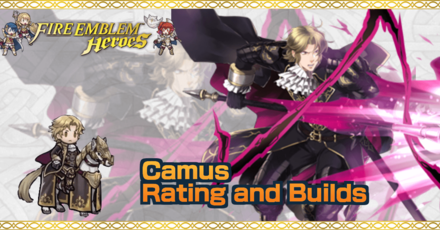 This is a ranking page for the hero Camus - Sable Knight from the game Fire Emblem Heroes (FEH). Read on to learn the best IVs (Individual Values), best builds (Inherit Skill), weapon refinement, stats at Lv 40, and more for Camus.

As a hero obtainable only through Grand Hero Battle, Camus will always have neutral IVs by default. The only way to access IVs for this unit is through using Trait Fruits.

The best IVs for Camus are +Spd and -HP. A higher Spd stat allows Camus to get a ton of follow-up attacks on his foes. It also protects him from hostile follow-up attacks. His HP is of less importance and thus safe to be taken as a bane.

We recommend a +Spd IV when merging Camus to 10. This is for the same reasons as above. With this IV, he can reach 40 Spd which is at a range wherein he can score lots of follow-up attacks if he has ample support from allies.

This skillset uses Blue Flame and Steady Stance. Camus can be a tank for physical damage by raising his Def with Steady Breath 4 and delaying the enemy’s special skill. This will reduce the damage he takes, so counterattacking and gaining a guaranteed follow-up through Quick Riposte allows you to turn the tables on an enemy.

This skillset aims to make the most of Camus’s counterattacking capability. With his low Res stat, Camus will need to make use of Vantage 3 in order to counterattack and takedown tome wielding units. As for a C skill, we recommend a cavalry-exclusive buff skill or something to boost his party’s stats.

This is a high budget build that utilizes Gradivus' refine to boost Camus' firepower while granting him sustain. You can opt for another Special like Bonfire or Noontime, and can also opt to stack Atk/Spd Solo 3 as a Sacred Seal or Mystic Boost 3 for even more sustain.

We recommend the Special Effect Refine for Gradivus

Gradivus' refine grants Camus Atk/Sd/Def/Res+4 and will heal him after combat, even if he dealt 0 damage.

This gives him bulkiness and sustain, enabling Camus to be able to tank more hits and the added stats ups his one-shot potential.

Note: Camus's stats will always have no IVs.

Camus is a close ranged physical attack phase unit. Therefore, when not accounting for the Weapon Triangle, the amount of damage he deals will be equivalent to his Atk minus the foe's Def.

Exclusive weapon allows him to counterattack at any range

Camus's legendary weapon Gradivus will let him counterattack regardless of distance when the foe initiates combat. This will let him turn the tables on bow and dagger users, so he functions great as the party's physical wall.

With the weapon refine, it will grant Camus Atk/Spd/Def/Res+4 and will heal him even if he dealt 0 damage during combat. This grants him higher firepower and sustain.

Camus's default special skill Growing Thunder will let him inflict damage 3 spaces above and below the target foe. When multiple foes are lined up in a row or terrain is making it difficult to attack certain foes, this special can be of extreme use.

With his default A skill Grani's Shield, Camus can neutralize the effects of skills effective on cavalry. As a cavalry unit, Camus would normally take 1.5x damage from foes with weapons that are effective on cavalry, but this skill will let him supress that damage to the regular amount of 1x.

Camus's default C skill Goad Cavalry will give Spd/Atk+4 to all cavalry units within 2 spaces during combat. Camus's cavalry related skills will come in very handy for a 'Horse-Emblem' party.

With his low Res stat, Camus cannot withstand attacks from magical foes such as mages, making his counterattack ability slightly hard to take full advantage of. If the foe is a red mage or possibly a blue mage with low Atk, Camus can withstand an attack or two, but a blow from a green mage will absolutely wipe him out, so keep him away from magic attackers as much as possible.

We Recommend You Unlock Potential for Camus - Sable Knight!

Camus as a Source Hero

Camus can be used to inherit Grani's Shield, as well as Goad Cavalry. While these are both useful skills, Camus himself is a pretty good unit, so we recommend keeping and training at least one Camus around before foddering off or merging any duplicates.

How to Get Camus / Illustrations / Voice Actor / Quotes

How to Get Camus

Camus is a Hero who, for a limited time, can be obtained through completing a Grand Hero Battle for the first time. They do not appear in regular summons. After the event has ended, they can be obtained by using Heroic Grails.

Register as a member and get all the information you want. (It's free!)
Login
Opinions about an article or post go here.
Opinions about an article or post
We at Game8 thank you for your support.
In order for us to make the best articles possible, share your corrections, opinions, and thoughts about "Camus Builds and Best IVs" with us!
When reporting a problem, please be as specific as possible in providing details such as what conditions the problem occurred under and what kind of effects it had.