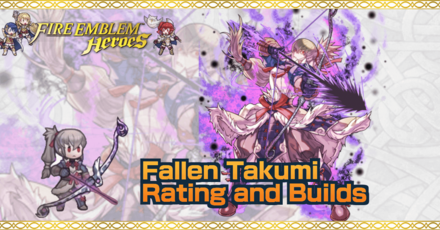 This is a ranking page for the hero Takumi - Empty Vessel from the game Fire Emblem Heroes (FEH). Read on to learn the best IVs (Individual Values), best builds (Inherit Skill), weapon refinement, stats at Lv 40, and more for Fallen Takumi.

As a hero obtainable only through Grand Hero Battle, Fallen Takumi will always have neutral IVs by default. The only way to access IVs for this unit is through using Trait Fruits.

We recommend a +Spd IV when merging Fallen Takumi to 10. This is for the same reasons as above. With this IV, he can reach 44 Spd, if you include the bonus of Skadi, which is at a range wherein he can score lots of follow-up attacks if he has ample support from allies.

This is a build designed to give Takumi the most points in Arena with his weapon refine. Use C Duel Infantry to bring his BST up and Deadeye as a high scoring Special.

This is a build designed to stack the chip damage Fallen Takumi can deal to defeat units. With his weapon refine, Poison Strike, and double Savage Blow, even the healthiest units will eventually be reduced to 1 HP.

This build is for Fallen Takumi as an anti-save unit in Aether Raids. He's be able to chip down tanks with Savior skills and be safe from counter attack due to Windsweep 3.

This build is to make Fallen Takumi into a support unit for Aether Raids. He can chip away at bulkier enemies with the combination of his weapon refine and double Savage Blow and can teleport to his low HP allies with Wings of Mercy 3. You can substitute the B slot for Poison Strike 3 if you so wish.

We recommend the Special Effect Refine for Skadi

Skadi's refine gives Fallen Takumi Atk/Spd+5 if his HP is ≥ 25%. He'll also deal 7 damage to enemy units within 3 columns centered on him on turns 2 and 3. He'll deal the same amount of damage to his target and their allies within 2 spaces if he attacked.

We recommend getting this refine because this allows Fallen Takumi to quickly take out units because of the chip damage he deals not only on the start of turn 2 and 3, but also when he attacks.

Note: Fallen Takumi's stats will always have no IVs.

Fallen Takumi is a ranged physical attacker (range = 2). Therefore, when not accounting for the Weapon Triangle, the amount of damage he deals will be equivalent to his Atk minus the foe's Def stat.

At the start of turn 2 and 3, Fallen Takumi's Skadi will unleash 7 damage on all foes within 3 columns centered on him. It will also convert all bonuses into penalties until their next action. This is a very powerful effect that not only chips off a nice chunk of HP, but it also weakens them allowing Fallen Takumi and his allies to swoop in and finish the job!

Skadi's refine will also grant Fallen Takumi Atk/Spd+5 and will deal 7 damage to his target and their allies within spaces after combat.

Paired with the effects from the start of turn, Fallen Takumi can deal 14 free damage to enemy units.

Fallen Takumi's native A skill is Fury 3 which grants him +3 to all stats, but inflicts -6 HP every time he exits combat. A good statline allows him to be deadly in both phases, but make sure to pair him up with healers to make up for the after-combat damage. Reyson or Leanne makes a great support unit for Fallen Takumi as they are both dancers that provide passive healing. If you prefer, you can also integrate skills such as Vantage 3 or Brazen skills to take advantage of tis HP side-effect.

Inflicts a penalty on the foe's Spd

The C Skill Spd Smoke will cast a Spd penalty on nearby foes after combat. This will allow Fallen Takumi to take out a foe while lowering the Spd nearby foe, allowing another ally to swoop in and finish that foe off. Fallen Takumi will also be able to take advantage of said debuff if a refresher-assist ally is nearby.

Fallen Takumi's Def and Res are rather low, and while he can deal free damage at the start of Turns 2 and 3, he can easily be taken out by a high power unit that initiates on him.

Be sure to put him out of range of enemy units and only use him to combat during the player phase!

Fallen Takumi as a Source Hero

Fallen Takumi can be used to inherit the skill Spd Smoke 3. However, you can only acquire Summer Rhys from Grand Hero Battles or from using Heroic Grails, so think carefully before foddering him off.

How to Get Fallen Takumi / Illustrations / Voice Actor / Quotes

How to Get Fallen Takumi

Fallen Takumi is a Hero who, for a limited time, can be obtained through completing a Grand Hero Battle for the first time. They do not appear in regular summons. After the event has ended, they can be obtained by using Heroic Grails.

Register as a member and get all the information you want. (It's free!)
Login
Opinions about an article or post go here.
Opinions about an article or post
We at Game8 thank you for your support.
In order for us to make the best articles possible, share your corrections, opinions, and thoughts about "Fallen Takumi Builds and Best IVs" with us!
When reporting a problem, please be as specific as possible in providing details such as what conditions the problem occurred under and what kind of effects it had.