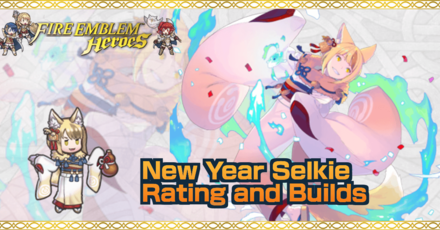 This is a ranking page for the hero Selkie - New Year's Spirit from the game Fire Emblem Heroes (FEH). Read on to learn the best IVs (Individual Values), best builds (Inherit Skill), weapon refinement, stats at Lv 40, and more for New Year Selkie. 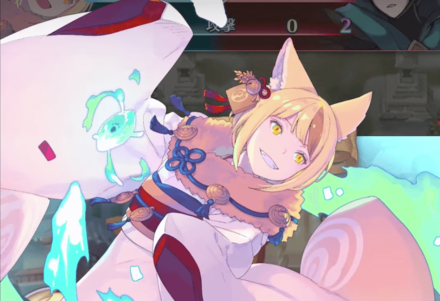 NY! Selkie's best IVs are +Res and -HP. With her superboon in Res, Selkie gains Res+4, further increasing the utility of New Foxikit Fang. As HP is a lower priority, it can safely be taken as her bane.

When merging to NY! Selkie to +10, +Res is still the best IV. With a +10 merge and superboon in Res, Selkie's Res reaches 48, allowing her to be capable of tanking almost any magic attack. However, if you really want to focus on damage output, +Atk is also a good IV here.

This build maximizes NY! Selkie's ability to tank enemy magic attacks. While lowering enemy stats via penalties, Selkie gains a Spd and Res buff when the foe initiates combat. As a colorless unit, Selkie should be effective against any color magic attacker.

This is a low cost build for NY! Selkie. With Even/Odd Wave on her C and Seal slots, her Res will always be increased by 6, and her allies also receive this bonus. With her A skill, she can counterattack any magic attacker, so these bonuses contribute to her ability to tank magic attacks.

NY! Selkie's exclusive weapon cannot currently be refined! This section will be updated if it becomes refineable in the future.

NY! Selkie is a close physical attacker (range = 1). Therefore, when not accounting for the Weapon Triangle, the amount of damage she deals will be equivalent to her Atk minus the foe's Def stat.

Exclusive weapon gets stronger with a higher Res gap

NY! Selkie's exclusive weapon New Foxkit Fang increases damage in combat when her Res exceeds that of the foe in addition to decreasing the damage taken from foes. This effect is very powerful against foes with low Res, and it also reduces the damage taken from area-damaging specials, meaning that Selkie does well against foes like Ophelia with area-damaging specials.

NY! Selkie's A skill Distant Ward allows her to counterattack a magic attack regardless of range. Additionally, she gainst Atk/Res+5 when a magic foe initiates combat, making her exceptional at tanking and countering magic attackers.

Can cast a penalty on foes standing adjacent to eachother

Selkie's B Skill Sabotage Spd will cast a Spd penalty on foes that are adjacent to another foe and have a Res stat that is 3 or lower than Selkie's. This skill works well when foes are grouped together in a map, and will allow Selkie and her allies to score more follow-up attacks.

NY! Selkie has a low Def stat, so she will take heavy damage from physical foes. In particular, a Brave weapon can take Selkie down before she even gets a change to counterattack, so you need to watch out for the type of weapon your opponent is using.

As a beast unit, NY! Selkie will take 1.5x damage from units like Brave Eliwood who wield beast-effective weapons. To make the most of NY! Selkie, you must be cautious of certain types of weapons.

Should you Unlock Potential for New Year Selkie?

Selkie - New Year's Spirit Only Appears as a 5 Star Hero!

NY! Selkie can be used to inherit Distant Ward. However, as she is a very powerful and rare Special Hero, we recommend building one before foddering any extras off.

How to Get New Year Selkie / Illustrations / Voice Actor / Quotes

How to Get New Year Selkie

New Year Selkie is a limited time Hero who can be pulled from a Special Heroes Summoning Event. They do not appear in regular summons.

Register as a member and get all the information you want. (It's free!)
Login
Opinions about an article or post go here.
Opinions about an article or post
We at Game8 thank you for your support.
In order for us to make the best articles possible, share your corrections, opinions, and thoughts about "New Year Selkie Builds and Best IVs" with us!
When reporting a problem, please be as specific as possible in providing details such as what conditions the problem occurred under and what kind of effects it had.