This is a guide for returning players for Fire Emblem Heroes (FEH). To know what a returning player should do, including new features or new units added recently, read on!

Fire Emblem Heroes is a game that you can play at your own pace, so there are a lot of things to do if you're a returning player.

Whether you're the type who wants to challenge difficult maps or aim for the higher tiers in Arena and Aether Raids or the type who just wants to check back now and then and see what's changed, you should definitely do the things above.

When you're done with the above, you can catch up with the current story, try clearing Grand Hero Battles, or whatever game mode is being features in the Events tab.

Some units right now are insanely strong like Brave Edelgard and Brave Hector, partly due to the weapon refinery.

By knowing which units are meta right now, you know what to expect when you go into game modes like Arena and Aether Raids or know which ones to add to your own barracks.

Check Which Banners Are Up

If you're a returning player, you can get a lot of Orbs by clearing any story quests you haven't done yet.

Knowing which banners are active in conjuction to checking the tier list will allow you to see which to spend your orbs on and which units to aim for!

These units are available to you when you come back to the game. You can access the Heroes' Path on the upper left of the main menu screen, below the castle upgrade icon.

It could take some time to get to rank 15, but getting Legendary Ike is worth it!

You can take your time in choosing which free unit to get from the banners that are currently active, though the recommended units are Brave Camilla and Brave Edelgard.

Various Sacred Seals have been given to players that they can forge, though keep in mind that you will need Sacred Coins in order to forge and upgrade them.

Units have also been made stronger through additional effects on their weapons through the Weapon Refine feature.

Using both these features will make your own units stronger and make clearing various maps easier.

New weapon refines come out every month for existing units, so watch out if your favorite unit receives one!

Learn How to Use New Skill Through Tactics Drills

The Skill Studies section in the Tactics Drills will allow you to control newer units that have been released and learn how to use them and their skills.

Clearing these maps will award you with Hero Feathers or Orbs.

Limited to new banners only, you can now obtain a free 5★ unit from the banenr after pulling 40 times.

This counts the free pull you have at the beginning as well as the tickets obtained from Forging Bonds.

It's Now Possible to Change IVs

A new item called a Trait Fruit is now available and will give you the ability to change any unit's IVs.

You will need 100 Trait Fruits to change IVs, so only save them for your favorite units!

You can obtain Trait Fruits through quests and other game modes.

A new game mode is available in the coliseum called Resonant Battles, where you try to chase and defeat thieves before they can leave the map.

New Hero units called Harmonized Heroes have also been added that function similarly to Duo units, except they are two units from different Fire Emblem titles rather than being from the same game.

Harmonized units also come with a special skill that can only be used once per battle.

Just like in other Fire Emblem games, you as the player can now participate in battle through the My Summoner feature!

Through this system you can change your appearance, copy skills from your own units to build yourself, and also fight on the battlefield in Mjolnir's Strike!

An item called Divine Codes can be collected and used to trade in for combat manuals of a unit.

These combat manuals can be used for fodder or merging your units.

Keep in mind that these combat manuals cannot be built like any units obtained from Heroic Grails. You can obtain Divine Codes from Mjolnir's Strike, quests, and other game modes.

A feature in Aether Raids called random dispatch has been added. This allows you to do your Aether Raids battles automatically and can be used up to 3 times per season.

If you don't have a lot of time on your hands, you can utilize auto-dispatch and earn the rewards for playing. 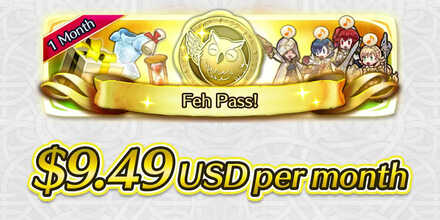 A subscription-based system called Feh Pass is also available for $9.49 per month.

In addition to getting Resplendent Heroes, you can also make use of additional features like the autobattler, which will loop a map over and over for you.

This makes it easy to farm for SP or Hero Feathers. If you're interested in these features, getting the Feh Pass may be worth looking into!

The Message Boards Are Open If You Have Questions!

If you have any questions about the game or how to build your units, you can post in our Message Boards!

Other Summoners are there to help you out or add you as their friend so you can go check them out.

Units from Genealogy of the Holy War

Units from Generalogy of the Holy War

Units from the Binding Blade

Units from the Blazing Blade

Post (0 Comments)
Opinions about an article or post go here.
Opinions about an article or post
We at Game8 thank you for your support.
In order for us to make the best articles possible, share your corrections, opinions, and thoughts about "Guide for Returning Players" with us!
When reporting a problem, please be as specific as possible in providing details such as what conditions the problem occurred under and what kind of effects it had.