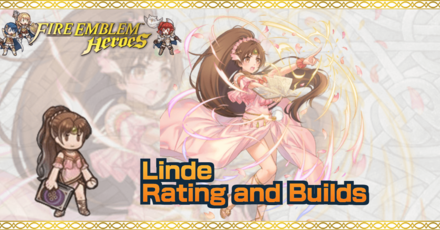 This is a ranking page for the hero Linde - Light Mage from the game Fire Emblem Heroes (FEH). Read on to learn the best IVs (Individual Values), best builds (Inherit Skill), weapon refinement, stats at Lv 40, and more for Linde.

The best IVs for Linde are +Spd and -Def. Since Linde relies on follow-up attacks to deal damage, a +Spd IV is best for her. It also allows her to take less follow-up attacks from foe. This boosts both her offensive and survivability capabilities. Her low Def is of less importance, so it is safe to take Def as a bane.

We recommend a +Spd IV when merging Linde to 10. For the same reasons above, Linde should aim to increase her Spd as much as possible. It is a utility skill that will help her both in offense and defense.

We recommend the Special Effect Refine for Dark Aura

Dark Aura is a more offensive weapon compared to Aura. The bonuses are very easy to trigger and take advantage of as melee units would always appreciate a +6 Atk. Linde also benefits a lot from the +5 Atk/Spd as she is mainly a speedy attacker. This gives Linde the ability to both support and deal damage in battles.

If you do not need the heal from Aura, we strongly recommend evolving it into Dark Aura.

Special Refine is a good option too

Aura has an identical effect, but requires magic and staff allies instead. Like our verdict for Dark Aura, this is a must have against the normal Aura as well. Before choosing, you should assess which units you would pair Linde with or which team compositions you plan her to be in to know the better option.

Linde is a ranged magic attacker (range = 2). Therefore, when not accounting for the Weapon Triangle, the amount of damage she deals will be equivalent to her Atk minus the foe's Res stat.

Linde has solid offensive stats that allows her to become a deadly offensive attacker. She sports 35 Atk and 36 Spd at Lv. 40 that allows her to score some follow-up attacks whenever up against enemy units. Her kit is kind of outdated, but if you put some investment into her, she is a solid unit. If you need a bit more stats, you can get her Resplendent Outfit which gives her +2 to all stats. Find out more about her Resplendent Outfit here!

Her default weapon, Aura, restores 5 HP to adjacent allies every time she initiates combat. You can easily heal up 30 HP worth in a turn if 3 allies are adjacent to her if one is a refresher-assist unit. If you slap Breath of Life onto her, she can heal 72 HP across 3 allies. This is a very niche strategy, but it can be helpful in modes like Mjolnir Strike, Arena, Aether Raids or maybe even Rival Domains.

If you are not a fan of Aura's healing, the weapon has 2 available upgrades that boost Linde and her allies' offensive stats. You can read more about these two upgrades here!

Linde's Def only sits at 14 at Lv.40. This makes it easy for physical users to take him out. Be mindful of Linde's positioning in relation to magical units that can easily take her out.

Should you Unlock Potential for Linde?

Linde - Light Mage Only Appears as a 5 Star Hero!

Linde as a Source Hero

Linde does not possess any skills that are worth inheriting onto another unit. We recommend training and investing in her instead. If you get multiple copies of her, you can aim for a +10 merge Linde or send her home for some Hero Feathers.

If you really need skills from Linde, her skills are available from more common 4★ or 3★ units. Consider all your resources before fodderring off Linde.

How to Get Resplendent Linde / Illustrations / Quotes

How to Get Resplendent Linde

Resplendent Linde can be obtained by buying a FEH Pass. After the distribution period has ended, they can also be purchased by FEH pass subscribers.

How to Get Linde / Illustrations / Voice Actor / Quotes

How to Get Linde

Linde is a Hero who can be pulled from any summon.

Register as a member and get all the information you want. (It's free!)
Login
Opinions about an article or post go here.
Opinions about an article or post
We at Game8 thank you for your support.
In order for us to make the best articles possible, share your corrections, opinions, and thoughts about "Linde Builds and Best IVs" with us!
When reporting a problem, please be as specific as possible in providing details such as what conditions the problem occurred under and what kind of effects it had.