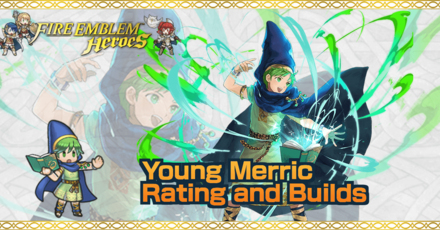 This is a ranking page for the hero Merric - Changing Winds from the game Fire Emblem Heroes (FEH). Read on to learn the best IVs (Individual Values), best builds (Inherit Skill), weapon refinement, stats at Lv 40, and more for Young Merric.

The best IVs for Young Merric are +Spd and -Res. A higher Spd stat allows Merric to get a ton of follow-up attacks on his foes. Additionally, his Spd is a superboon so you should take advantage of that as he can reach an amazing 45 Spd stat with it. With his low defensive stats, no bane would be best, but a -Res IV will make his Def and Res balanced.

Young Merric is a ranged magic attacker (range = 2). Therefore, when not accounting for the Weapon Triangle, the amount of damage he deals will be equivalent to his Atk minus the foe's Res stat.

Young Merric's exclusive weapon, the Winds of Change accelerates Young Merric's special cooldown by 1 everytime he attacks. If Young Merric is boosted by a skill like Rally or Hone, or if his HP is more than or equal to 50%, it grants +5 Atk/Spd and neutralizes effects that guarantee follow-up attacks against Young Merric like G Tomebreaker and Wary Fighter.

Young Merric's special skill, Righteous Wind boosts Young Merric's attacks by 30% and heals him and all allies after combat. I's strength lies on its low cooldown counter of 2. Combined with Winds of Change, Young Merric is able to constantly heal allies and deal damage to foes.

Young Merric has a Def of 21 and Res of 24 (with no IVs). Although Windsweep will allow him to avoid physical attackers who can counterattack, if they are able to attack him, they will do a ton of damage. On top of this, he will still be counterattacked by magic attackers, and with his low Res, he likely won't survive it. Only engage in combat with magic attackers when the foe's defeat is ceratin, and keep Merric safe in the enemy phase.

Merric - Changing Winds Only Appears as a 5 Star Hero!

Young Merric as a Source Hero

Young Merric can be used to inherit the skills Swift Sparrow 3 and Windsweep 3. However, Young Merric is pretty a powerful unit. We recommend that you train and build him instead.

How to Get Young Merric / Illustrations / Voice Actor / Quotes

How to Get Young Merric

Young Merric is a limited time Hero who can be pulled from a Special Heroes Summoning Event. They do not appear in regular summons.

Register as a member and get all the information you want. (It's free!)
Login
Opinions about an article or post go here.
Opinions about an article or post
We at Game8 thank you for your support.
In order for us to make the best articles possible, share your corrections, opinions, and thoughts about "Young Merric Builds and Best IVs" with us!
When reporting a problem, please be as specific as possible in providing details such as what conditions the problem occurred under and what kind of effects it had.