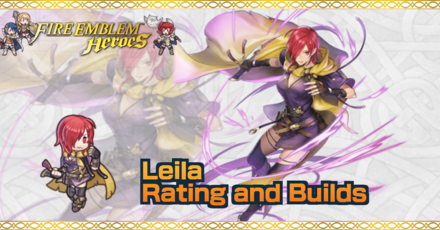 This is a ranking page for the hero Leila - Rose Amid Fangs from the game Fire Emblem Heroes (FEH). Read on to learn the best IVs (Individual Values), best builds (Inherit Skill), weapon refinement, stats at Lv 40, and more for Leila.

Leila's best IVs are +Atk and -Def. With Leila's increadibly high Spd, which is boosted more through Life and Death 4, she will usually be able to get a follow-up attack, so it would be better to instead focus on increasing her damage output. With her low Def stat, this is a unit that will want to avoid taking taking damage as much as possible anyway, so -Def is the ideal bane.

If you are building a +10 merged Leila, we recommend a +Atk IV. Increasing her Spd stat is just overkill, so instead you should focus on increasing the power she can deal with each attack, which will make it easier for her to take her foes down. If you are not going to use Life and Death with Leila, you may want to opt for +Spd instead, depending on the build you run.

Leila is a ranged physical attacker (range = 2). Therefore, when not accounting for the Weapon Triangle, the amount of damage she deals will be equivalent to her Atk minus the foe's Def stat.

Prevents enemy counterattacks with a nearby support ally

Leila's Constant Dagger weapon skill will prevent an enemy from making a counterattack attack when a support ally is within two spaces of Leila. After combat, Leila and the support partner swap spaces, which will allow that ally to take down the weakened foe.

Gains a bonus when initiating combat

Constant Dagger also gives Leila a +5 Atk/Spd buff when initiating combat. This works even if there is no nearby support ally, and for the most part, this unit will function better when used in the attack phase.

Can support allies with buffs and debuffs and foes

With the skills Rally Atk/Spd+ and Atk/Def Ruse 3, Leila can give an ally Atk/Spd+6 while simultaneously inflicting Atk/Def-5 on foes within all cardinal directions. This means that Leila can benefit from having a support ally on the team, and she can also fill the role herself.

Cannot take much of a beating

Leila has low defensive stats, and that is made even worse when Life and Death 4 is equipped. One hit from an enemy is usually all it will take to eliminate her. Play to her strengths, and move her around so that she can remain out of the foes' reach and avoid enemy attacks.

Leila - Rose Amid Fangs Only Appears as a 5 Star Hero!

Leila as a Source Hero


How to Get Leila / Illustrations / Voice Actor / Quotes

How to Get Leila

Leila is a Hero who can be pulled from any summon.

Register as a member and get all the information you want. (It's free!)
Login
Opinions about an article or post go here.
Opinions about an article or post
We at Game8 thank you for your support.
In order for us to make the best articles possible, share your corrections, opinions, and thoughts about "Leila Builds and Best IVs" with us!
When reporting a problem, please be as specific as possible in providing details such as what conditions the problem occurred under and what kind of effects it had.