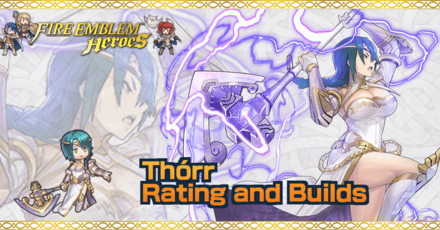 This is a ranking page for the hero Thórr - War God from the game Fire Emblem Heroes (FEH). Read on to learn the best IVs (Individual Values), best builds (Inherit Skill), weapon refinement, stats at Lv 40, and more for Thórr.

The best IVs for Thórr are +Atk and -Spd. Thórr's Atk stat is her most important stat, especially when she can almost always guarantee two attacks per combat.

Her Spd is a dump stat and is beyond salvageable, thus it is the bane of choice.

We recommend a +Atk IV when merging Thórr to +10. Attacking twice per combat maximizes the gain from choosing this boon.

Alternatively, a +Def IV may be used when using Thórr as a defensive support unit. Def is a superboon as well.

This build is a standard Galeforce follow-up attacker build with Wings of Mercy. Thórr warps in after the beacon has met the HP threshold and attacks twice to activate her own Galeforce. Worldbreaker provides Special acceleration to her and her nearby allies, which works well with other follow-up attackers who will also warp in with their own Wings of Mercy! Death Blow is used as the sacred seal instead of Atk/Def Solo because Wings of Mercy places Thórr adjacent to allies, turning off Solo skills.

This is a budget build for Thórr with her base kit. Simply add Reposition and a Sacred Seal of your choice; we chose Aerobatics for better mobility.

This build boosts Thórr's Atk and Def to make her a bulky offensive unit. Worldbreaker's special acceleration allows her to activate Bonfire after every attack.

Thórr is a close physical attacker (range = 1). Therefore, when not accounting for the Weapon Triangle, the amount of damage she deals will be equivalent to her Atk minus the foe's Def stat.

A Mythic Hero who can boost allies' HP and Def

War-God Mjölnir is a loaded weapon filled with multiple effects 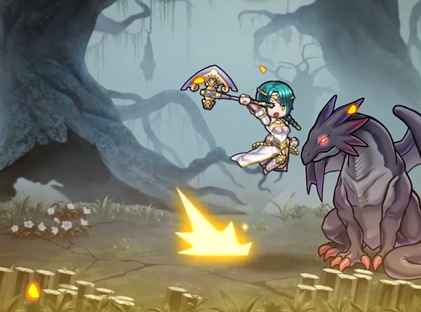 The Red Fafnit has been judged not worthy by the War God herself.

Thórr enforces her will with her personal axe, War-God Mjölnir.

It is a stacked weapon with multiple effects that ensure Thórr comes out victorious in combat.

Only the worthy can wield such a powerful weapon, and the War God is definitely worthy.

Thórr comes with a new B skill Flow Guard 3.

As long as Thórr is initiating combat, she neutralizes effects that prevent her follow-up attacks and ensures that the foe cannot advance his/her Special cooldown.

Worldbreaker accelerates Special cooldown for Thórr and her allies

It grants accelerated Special cooldown charges per attack during combat to Thórr and all her allies within 2 spaces.

As long as Thórr is near her allies, they will be triggering their Special skills more often, which should lead to an easy victory!

Cannot retaliate at range without investment

Thórr lacks the ability to counterattack from range without investing Distant Counter or its variants into her through Skill Inheritance.

She can be kited by ranged units, especially those with post-combat movement through Canto effects from weapons or skills like A/R Far Trace 3.

Consider investing a Distant Counter skill onto Thórr if you will use her often.

War-God Mjölnir's effects are reliant on the HP condition

War-God Mjölnir is a stacked weapon, but it is heavily reliant on Thórr passing the HP check.

Should Thórr fall below 25% HP, the mighty axe becomes nothing more than a boosted Slaying Axe+ with armor effectiveness.

Watch over Thórr's HP carefully, especially when she has already entered combat before.

As a flying unit, Thórr takes 1.5x damage from bows and weapons effective on flying units. Be sure to keep her out of the range of archers, and leave them to other units.
Heroes with Effective Skills

Thórr - War God Only Appears as a 5 Star Hero!

Thórr - War God only appears as a 5 Star Hero. We will include whether or not you should Unlock Potential for Thórr - War God if a 4 Star version is released!

Thórr as a Source Hero

Thórr has Atk/Def Push 4 and Flow Guard 3 as good inheritable skills in her kit.

While Atk/Def Push 4 is a good skill to use, it can be found elsewhere through multiple heroes.

Flow Guard 3 is a new skill that is currently only available through using Thórr as source material (as of December 2021).

We recommend keeping a copy of Thórr for use before foddering her off for her skills.

How to Get Thórr / Illustrations / Voice Actor / Quotes

Thórr is a limited time Hero who can be pulled from a Mythic Hero Summoning event. They do not appear in regular summons.

In order for us to make the best articles possible, share your corrections, opinions, and thoughts about 「Thorr Builds and Best IVs | Fire Emblem Heroes (FEH)」 with us!