A guide to building a great defense party in one of the modes of play in Fire Emblem Heroes (FEH), Aether Raids. This page shows great units to have in your defense party as well as how to integrate them into specific strategies and lineups. 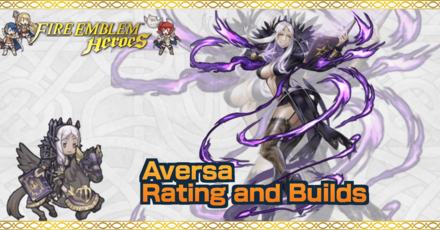 Aversa is one of the best characters in an Aether Raid defense map. Through her exclusive tome Aversa's Night, she can inflict a -3 penalty to all stats of foes who have low enough HP, and additionally convert bonuses from skills such as fortify into penalties. This debuff is inflicted over the entire map, so no matter where Aversa is she can carry out this role.

This is why in defenses where she is utilized, she is often isolated in a hard-to-reach area that makes it very hard for raiding parties to get rid of her debuffs. 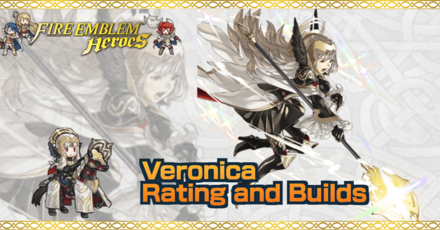 Veronica is a tricky unit to deal with in Aether Raids defense. She can attack raiding parties without receiving counterattacks so the most efficient way to take her out is through the player phase. This costs you an action in the player phase which is very valuable in Aether Raids as the turns are limited. Additionally, when she does attack the raiding party, she inflicts -4 to Atk/Spd/Def/Res to her target and all enemies within 2 spaces of said target. She also grants +4 to all stats to her and allies within 2 spaces of her.

Her AoE abilities make her very good in maps that force raiding parties to be funnelled into a very tight area. An example of how to best use Veronica in a defense map is shown below.

Since she is a staff user, she can also heal-up her allies if they are hit by Bolt Tower (O). This weakens strategies that wait for the Bolt Tower (O) to hit defense units before striking deep into the map. 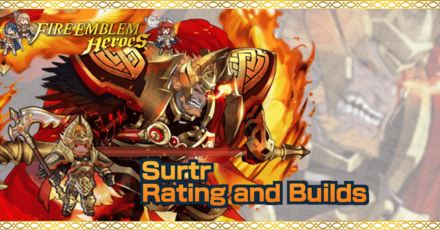 Surtr is very hard to take down because of his natural bulk and skills. Placing him in the back of the map covered with lots of structures is a sure-fire way to cause your opponents spend a lot of turns trying to take him out. Not to mention, it is not uncommon to take 2 or more turns trying to take Surtr down especially when a raiding party finds themselves not possessing an armor-effective weapon.

This is all on top of the fact that they will also be dealing with other defense units and structures that have their own gimmicks as well. 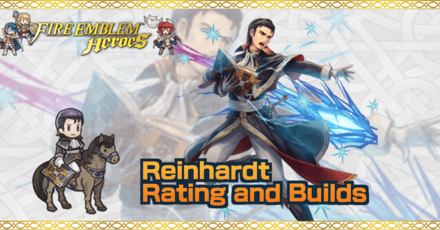 Reinhardt has time and time proven himself as one of the best offensive units in the game. With his Dire Thunder and a little bit of investment, he can take out a lot of units in one attack without taking damage. However, what makes him shine in Aether Raids is not his offensive ability, but his very high reach. Against lower-skilled raiders, he can take out two units in a phase with a refresher-assist ally! Take note that you can get Reinhardt by participating in the Heroes' Path quests, that is in addition to his very common apperances in banners as a 3★ to 4★ unit! If you do not have much options available, try Reinhardt as you can not really go wrong with this fan-favorite hero.

A raider's success in Aether Raids relies on a degree of prediction and planning against your AI-controlled team. By making use of the danger zone indication, a raider can predict which units will attack which. This gets more complicated if dancer/singer units are added into the mix, making it harder for the raider to predict the AI's movement. By combining refresher-assist allies with units with high firepower and reach like Reinhardt or Brave Lyn, the AI can take out the unsusceptible raider if he or she is not being careful with the raid.

Another way to increase the variability of how the AI moves is to incorporate Wings of Mercy 3 into your refresher-assist units. If the raider is not being careful, he or she might be a victim of an unseen attack that is caused by a refresher-assist unit teleporting to a unit like Reinhardt for a second attack. This can cause the raider to lose control of his or her plan and lose the raid eventually.

We highly recomend making use of flying refresher-assist units as the varying terrain and the tight spacings of an Aether Keep map makes it hard for infantry units to reach their allies.

Example 1: placing armored units at the back end of the map to make them hard to take out 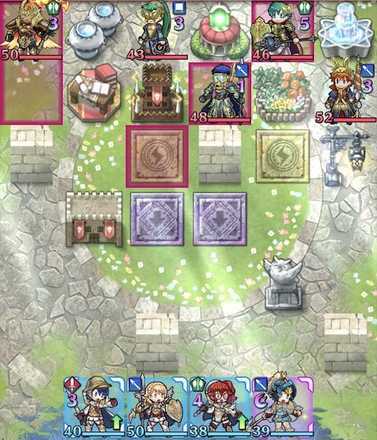 As discussed earlier with Surtr, a common strategy is to put durable units at the back of the map and surround them with obstacles so that it is very hard to reach them. It is going to cause your enemy some actions or maybe even turns before they will be able to engage a durable unit like Surtr. Because of Surtr's natural bulk and access to skills like Wary Fighter 3, it is not uncommon for players to take two or more turns to take a unit like him down.

Example 2: a defense that makes good use of a map-wide debuff by keeping the source unit safe 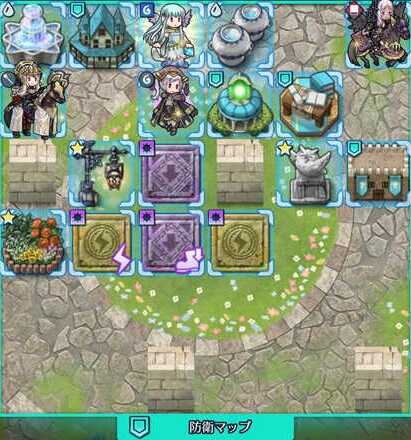 This map makes good use of Aversa's map-wide debuff by keeping her safe at the top-right corner of the map. There, she is kept safe by some structures, terrain and the Fortress (D). If you were to go for her passing through the trees, you will be in range of attack not only from Aversa herself, but from her allies as well. A Tactics Room is also in that side to prevent enemy movement under some situations.

Going through the left side of the map would not be easy as well. Traps, the Panic Manor (O) and 3 defense units would give a more than warm welcome to the unlucky raiders. Trying to bait out Robin or Veronica would require some luck and strategy as well because of the trap tiles that are conveniently placed in front of them. They can take another action as Ninian would conveniently dance them into taking another attack against the raiding team.

Some other good map-wide debuffers to use are Soren who has Chill Atk 3 built-in into his weapon, meaning he can equip 2 other chill skills on top of that and Gunnthrá who has Res Ploy 3 and the very powerful Chilling Seal. 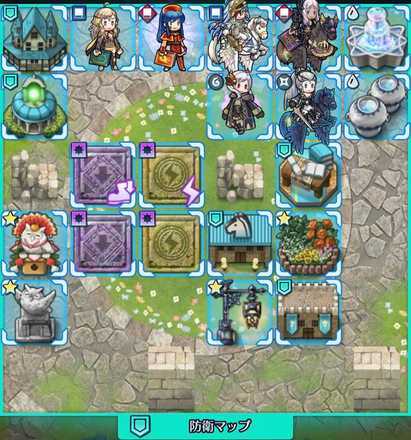 This is a very straightforward strategy that makes use of structures and the general terrain of the map to funnel raiders either into the trap-filled center. At first glance, they may be able to take the right side straight into the Aether structures but because of an impassable terrain native to the map and the Fortress (D), they cannot take that easy route.

The easy target here is Ophelia, but she is very protected by trap tiles. If they are able to take out Ophelia, the other units are just in range for an intense skirmish in the middle of the map. They are aided by structures that funnel their movement and inflict debuffs on the enemy so the raiders are always at a disadvantage.

Show Us Your Aether Raids Defense Maps Below!

We encourage users to send their Aether Keep layouts below! If you prefer, you can provide a brief explanation as to why you use said layouts and maybe tell us a thing or two about the heroes that are present in your layout. Additionally, you can ask other users in the website for tips and tricks on how to make your defense better.

Register as a member and get all the information you want. (It's free!)
Login
Opinions about an article or post go here.
Opinions about an article or post
We at Game8 thank you for your support.
In order for us to make the best articles possible, share your corrections, opinions, and thoughts about "Best Aether Raid Defense Party" with us!
When reporting a problem, please be as specific as possible in providing details such as what conditions the problem occurred under and what kind of effects it had.