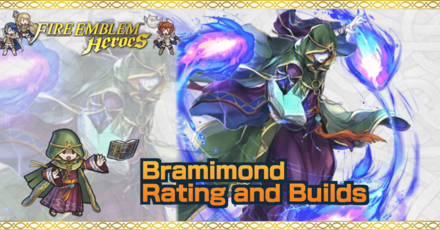 This is a ranking page for the hero Bramimond - The Enigma from the game Fire Emblem Heroes (FEH). Read on to learn the best IVs (Individual Values), best builds (Inherit Skill), weapon refinement, stats at Lv 40, and more for Bramimond.

Bramimond's best IVs are +Atk and -Spd. With his superboon in the stat, a +Atk IV gives Bramimond Atk+4, allowing him to deal a lot more damage when he gets his guaranteed follow-up attacks. With his rather low Spd stat, it is the ideal choice for a bane, but beware that this means that this will subtract 4 from the stat.

If you are building a +10 merged Bramimond, we recommend a +Atk IV. With 10 merges and a +Atk IV, his Atk stat will reach 65, and he will be careful of inflicting massive damage when he can get a follow-up attack through his wepaon skill.

Bramimond's weapon cannot currently be refined. This section will be updated if it becomes refineable in the future!

Bramimond is a ranged (Range = 1) magic attacker. Therefore, he will take and receive damage regardless of the weapon triangle. Additionally, if he is played during a week of dark season alongside a unit who is blessed with an dark blessing, he will raise the HP and Atk of said unit.

Exclusive weapon is very strong against foes with penalties

Bramimond has the weapon skill Void Time, which gains a bonus effect depending on the foe's stats. If the foe has an Atk stat of 50 or more, Bramimond gains Atk/Def/Res+5 during combat, and if the foe's Spd stat is 35 or more, Bramimond gets a guaranteed follow-up attack. On top of that, both of these effects can also trigger if the foe has an active penalty on them. These effects both make Bramimond very strong in combat, but he especially excels in teams with a designated debuff support unit.

Bramimond also has the C Skill Impenetrable Dark, which will disable the skills of all foes other than the foe in combat. Powerful support buffs like Drive Res, as well as ones learned by units like Kaden or Brave Hector will be rendered totally useless in combat. Just keep in mind that this will not have any effect on the foe in combat's own buff skills, as well as buffs gained before combat.

Weak to foes with no active penalties

Bramimond cannot make use of his powerful weapon skill if the foes aren't taking any active penalties. Without the effect of his weapon skill, Bramimond will lose to units with high offensive stats, so he should ideally be allied with a debuff support unit.

Bramimond has a low Spd stat, meaning he will often have to take follow-up attacks from foes. He won't be able to counterattack close attackers, so be sure that he stays out of the danger zone for the most part.

Should you Unlock Potential for Bramimond?

Bramimond - The Enigma Only Appears as a 5 Star Hero!

Bramimond as a Source Hero

Bramimond can be foddered off to inherit the skills Atk/Def Push 4 and Lull Atk/Res 3. If you inherit the skills prerequisite skills Atk/Def Push 1-3 beforehand, you can actually use Bramimond to get both Atk/Def Push 4 and Lull Atk/Res 1-3 at the same time, although it is quite the investment. For the most part, we recommend developing your Bramimond instead of foddering him off though, since he is a powerful Dark-type mythic hero, and at the moment, the only Colorless Tome user in the game.

How to Get Bramimond / Illustrations / Voice Actor / Quotes

Bramimond is a limited time Hero who can be pulled from a Mythic Hero Summoning event. They do not appear in regular summons.

Register as a member and get all the information you want. (It's free!)
Login
Opinions about an article or post go here.
Opinions about an article or post
We at Game8 thank you for your support.
In order for us to make the best articles possible, share your corrections, opinions, and thoughts about "Bramimond Builds and Best IVs" with us!
When reporting a problem, please be as specific as possible in providing details such as what conditions the problem occurred under and what kind of effects it had.