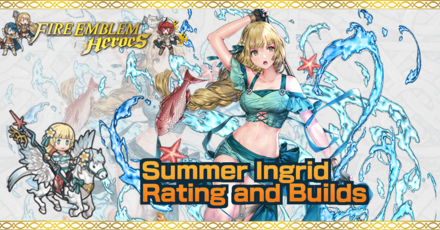 The best IVs for Summer Ingrid are +Spd and -Res. A higher Spd stat allows Ingrid to score follow-up attacks even on very fast foes. Additionally, her Spd is a superboon so you should take advantage of that as much as possible. Her Res is of less importance so it is safe to take as a bane.

Summer Ingrid's weapon cannot currently be refined. This section will be updated if it becomes refineable in the future!

Summer Ingrid is a close physical attacker (range = 1). Therefore, when not accounting for the Weapon Triangle, the amount of damage he/she deals will be equivalent to her Atk minus the foe's Def stat.

Starpoint Lance grants Ingrid +5 Atk/Spd/Def/Res and restores 10 HP to her after combat every first battle of a turn. It can only be activated once per turn, but it is pretty helpful nonetheless. If Ingrid needs a boost to take a priority unit down, she can bait enemies into attacking her while Melon Float+ is still available in said turn. Alternatively, she can combine it with the effects of Studry Impact and try taking down a priority target with her boosted stats.

Guard Bearing reduces the damage of the first attack of the first combat engagement in the enemy phase by 50%. This can stack with the heal granted by Starpoint Lance and both can make Summer Ingrid a deceptively bulky unit when strategy is applied. Use these effects to your advantage to keep Summer Ingrid from being taken out.

Since Sturdy Impact does not work in the enemy phase, Guard Bearing provides Ingrid with the much needed bulk she needs in said phase.

In addition to the effects from her weapon skill, Summer Ingrid has the skill Sturdy Impact, which gives her Atk+6 and Def+10 when initiating combat. This skill also prevents an enemy follow-up attack, and makes Summer Ingrid a formidable player phase unit.

Summer Ingrid is very powerful in her first fights because of the effects of Starpoint Lance and Guard Bearing 3, but these effects deactivate thereafter. This makes her a bit less powerful when engaging multiple enemies. Keep this in mind and integrate it into your strategy to fully utilize Summer Ingrid's strengths.

As a flying unit, Summer Ingrid takes 1.5x damage from bows and weapons effective on flying units. Be sure to keep them out of the range of archers and leave them to other units.
Heroes with Effective Skills

Should you Unlock Potential for Summer Ingrid?

Ingrid - Solstice Knight Only Appears as a 5 Star Hero!

Summer Ingrid as a Source Hero

Summer Ingrid can be used to inherit Guard Bearing 3 or Sturdy Impact. However, Summer Ingrid is a powerful special hero whom you can only get from specific banners. Please think carefully before fodderring her off!

How to Get Summer Ingrid / Illustrations / Voice Actor / Quotes

How to Get Summer Ingrid

Summer Ingrid is a limited time Hero who can be pulled from a Special Heroes Summoning Event. They do not appear in regular summons.

Register as a member and get all the information you want. (It's free!)
Login
Opinions about an article or post go here.
Opinions about an article or post
We at Game8 thank you for your support.
In order for us to make the best articles possible, share your corrections, opinions, and thoughts about "Summer Ingrid Builds and Best IVs" with us!
When reporting a problem, please be as specific as possible in providing details such as what conditions the problem occurred under and what kind of effects it had.