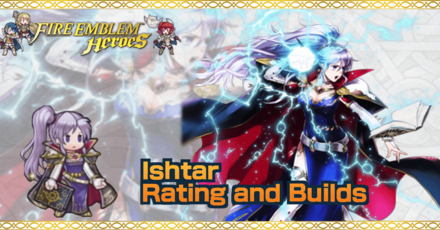 This is a ranking page for the hero Ishtar - Thunder Goddess from the game Fire Emblem Heroes (FEH). Read on to learn the best IVs (Individual Values), best builds (Inherit Skill), weapon refinement, stats at Lv 40, and more for Ishtar.

The best IVs for Ishtar are +Spd and -Res. A higher Spd stat allows Ishtar to get a ton of follow-up attacks on her foes. It is best for her to take a bane in Res because she can afford to do so. Her Def is already very low and both Def/HP stats are superbanes for her—this makes it pretty unwise for her to take banes in Def and HP. Definitely go for a -Res as much as possible!

We recommend a +Spd IV when merging Ishtar to 10. This is for the same reasons as above. Her Spd will be in the mid 40s at this point. Combined with Mjölnir and Swift Sparrow 2, she can easily score follow-up attacks on most units in the game.

Ishtar is a ranged magic attacker (range = 2). Therefore, when not accounting for the Weapon Triangle, the amount of damage she deals will be equivalent to her Atk minus the foe's Res stat.

On top of Ishtar's decent Spd, she gains a total of +10 Spd when initiating attacks in the player phase because of Mjölnir and Swift Sparrow 2. This makes it easy for her to score follow-up attacks especially if she has high merge count.

Because Mjölnir accelerates Isthar's special trigger, Moonbow will only have a cooldown of 1. This means Ishtar will be able to trigger Moonbow on a follow-up attack.

If you have the resources to do so, consider upgrading to Swift Sparrow 3!

Has the powerful Passive B Skill Vantage

With her default B Skill Vantage equipped, Ishtar can counterattack an enemy before their attack when she has less than 75%. If you are able to manage his HP amount efficiently, this skill will allow you to ensure you can bring down an enemy even when defending. This only works on units tha Ishtar can land counterattacks on!

Vantage, though a powerful skill, does not really jive well with the rest of Ishtar's kit. We recommend inheriting a skill like Desperation instead. Check out the builds we have for Ishtar!

Gives an Atk bonus to entire team on odd-numbered turns

Thanks to Odd Atk Wave, Ishtar and her allies will gain Atk +6 at the start of odd-numbered turns. When combined with Swift Sparrow 2, she will gain a total bonus of Atk+10, making her a pretty strong magical attacker. This skill is excellent for support as well, meaning that you could keep Ishtar on the team to buff her teammates!

Again, upgrade to Swift Sparrow 3 if Ishtar is one of your main units. It will be well worth it!

For Ishtar, her best defense against against said units is offense. Take them out in the player phase where Ishtar is most powerful!

Should you Unlock Potential for Ishtar?

Ishtar - Thunder Goddess Only Appears as a 5 Star Hero!

Ishtar as a Source Hero

Ishtar can be used to inherit the skill Odd Atk Wave 3. However, Ishtar is a strong blue tome unit and a 5★ exclusive as well. We recommend training and building her instead!

How to Get Ishtar / Illustrations / Voice Actor / Quotes

How to Get Ishtar

Ishtar is a Hero who can be pulled from any summon.

Register as a member and get all the information you want. (It's free!)
Login
Opinions about an article or post go here.
Opinions about an article or post
We at Game8 thank you for your support.
In order for us to make the best articles possible, share your corrections, opinions, and thoughts about "Ishtar Builds and Best IVs" with us!
When reporting a problem, please be as specific as possible in providing details such as what conditions the problem occurred under and what kind of effects it had.