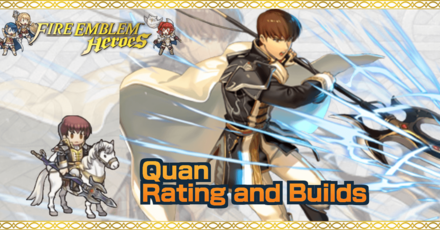 This is a ranking page for the hero Quan - Luminous Lancer from the game Fire Emblem Heroes (FEH). Read on to learn the best IVs (Individual Values), best builds (Inherit Skill), weapon refinement, stats at Lv 40, and more for Quan.

The best IVs for Quan are +Atk and -Res. Quan is best used as a physical counterattacker, so his offensive skills are very important. His Spd is not reliable for follow-up attacks and is only at a range to protect him from follow-up attacks. This makes the best +IV for him +Atk. Do not worry about Spd much though as it will be supplemented by his A skill. His Res is very low and it is of less importance so it can be safely taken as a bane.

We recommend a +Atk IV when merging Quan to 10. This is for the same reasons as above. At this point, he will be an extremely powerful counterattacker if he is against physical units that are not of flying movement.

This build utilizes Quan's weapon refine to make himself bulkier and to provide support to his allies. You can swap out his C and Sacred Seal for something that will suit your party more such as Goad Cavalry for horse parties.

We recommend the Special Effect Refine for Gáe Bolg

Gáe Bolg's refine gives Quan and his allies with swords, lances, or are cavalry Atk/Def+5 during combat, making them more durable and increasing their firepower.

This makes Quan extremely tanky, as the effect stacks when he's also in combat with an infantry, armored, or cavalry enemy unit, giving him an effective +10 to his Atk/Def.

Quan is a close physical attacker (range = 1). Therefore, when not accounting for the Weapon Triangle, the amount of damage he deals will be equivalent to his Atk minus the foe's Def stat.

Gáe Bolg, Quan's weapon skill, grants +5 Atk/Def to him if he is against an infantry, armored or cavalry foe. This means that he has an automatic Atk/Def boost provided he is not fighting a flying ally. A good quality of this weapon skill is that it activates on both phases unlike skills like Sturdy Impact.

The weapon refine also grants him an additional +5 Atk/Def if Quan has an ally using a sword, lance, or is cavalry, further increasing his durability.

This completely stacks with Quan's Steady Posture 2! If Quan is attacked by any unit besides the flying type, he enjoys a total of +5 Atk +9 Def +4 Spd. This makes him extremely durable and if he is able to land a counterattack follow-up attack, it will surely deal lots of damage.

Quan has access to the very powerful Rally Spd/Def+ which grants +6 Spd/Def to allies. As Quan is a decent attacker, Rally Atk/Spd+ combined with Drive Atk 2 allows him to also become a pretty good supporting unit if ever attacking is not an option for him. Situations like these include fighting against a high Def gren unit like Surtr.

As an upgraded version of Rally Spd Def, it possesses a huge amount of SP to learn. This increases his rating in the Arena thus leading to a higher score.

Quan's C Skill Drive Atk 2 will give a +3 Atk buff to his allies within 2 spaces. This lets him support allies just by being nearby, and equipping him with the sacred seal Drive Atk 2 or Spur Atk 3 can further increase the effects of this bonus.

As this does not affect Quan's Atk stat, like most C skills, make sure to equip your allies with buffs too. This is so that Quan enjoys boosts to his most important stats as well. The best strategies will almost always include some kind of synergy between units.

Gáe Bolg does not provide bonuses when up against flying units

Flying units are the only units in which Gáe Bolg does not provide bonuses against. Be careful when fighting against flying units as you will be down by -5 Atk/Def. This makes Quan deal less more damage and take more damage if the foe is physical.

Quan takes 1.5x damage from cavalry-effective weapons like Ridersbane, and one blow from this type of weapon is sure to take him down. Make sure you know what weapons you are up against before hopping too far into the line of battle!

Should you Unlock Potential for Quan?

Quan - Luminous Lancer Only Appears as a 5 Star Hero!

Quan as a Source Hero

Quan can be used to inherit the skill Rally Spd/Def+. However, the number of units with this skill is limited, so think carefully before foddering him off.

How to Get Quan / Illustrations / Voice Actor / Quotes

How to Get Quan

Quan is a Hero who can be pulled from any summon.

Register as a member and get all the information you want. (It's free!)
Login
Opinions about an article or post go here.
Opinions about an article or post
We at Game8 thank you for your support.
In order for us to make the best articles possible, share your corrections, opinions, and thoughts about "Quan Builds and Best IVs" with us!
When reporting a problem, please be as specific as possible in providing details such as what conditions the problem occurred under and what kind of effects it had.