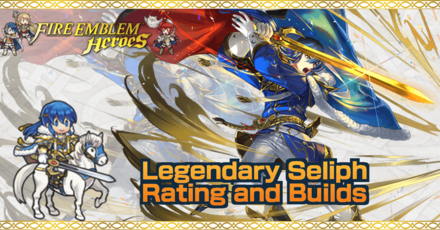 This is a ranking page for the hero Seliph - Scion of Light from the game Fire Emblem Heroes (FEH). Read on to learn the best IVs (Individual Values), best builds (Inherit Skill), weapon refinement, stats at Lv 40, and more for Legendary Seliph.

Legendary Seliph's weapon cannot currently be refined. This section will be updated if it becomes refineable in the future!

Legendary Seliph is a close physical attacker (range = 1). Therefore, when not accounting for the Weapon Triangle, the amount of damage he deals will be equivalent to his Atk minus the foe's Def stat.

Virtuous Tyrfing inflicts -6 Atk/Def at the start of combat on foe if Seliph is either attacked or his HP < 100% at start of combat. Because of its easy trigger conditions, it is active most of the time in the player-phase but it has a guaranteed activation in the enemy phase. Additionally, as long as Seliph hits the enemy, even if he deals 0 damage, the weapon heals him for 7 HP. This makes him a durable offensive unit that still has bite even in the enemy phase.

Holy War's End guarantees a follow-up attack for Seliph if foe initiates combat. This follow-up attack is done after the foe's first attack so Seliph has a high chance of taking the foe out before receiving the next attack. The only trigger condition for this is having more than or equal to 50% HP. It's effects are similar to Quick Riposte 3.

Legendary Seliph's skills as discussed above, all synergnize to make him a durable enemy-phase unit can absorb and dish-out tons of damage just by stepping in the danger zone. His C skill, Joint Hone Def allows him to stack even more Def. For his special, Ignis, fills the slot perfectly as it makes use all of his physical durability and turns it into raw damage. Additionally, it further incentivizes stacking huge amounts of Def onto Seliph.

Legendary Seliph takes 1.5x damage from cavalry-effective weapons like Ridersbane, and one blow from this type of weapon is sure to take him/her down. Make sure you know what weapons you are up against before hopping too far into the line of battle!
Heroes with Effective Skills

Should you Unlock Potential for Legendary Seliph?

Seliph - Scion of Light Only Appears as a 5 Star Hero!

Legendary Seliph as a Source Hero

Legendary Seliph can be used to inherit the skills Distant Counter. However, Legendary Seliph is a very powerful enemy phase hero who can lead your team in the Arena. Not to mention that this skill can be inherited from other more common units. Please think carefully before using Legendary Seliph as a fodder for this skill.

How to Get Legendary Seliph / Illustrations / Voice Actor / Quotes

How to Get Legendary Seliph

Legendary Seliph is a limited time Hero who can be pulled from a Legendary Hero Summoning event. They do not appear in regular summons.

Register as a member and get all the information you want. (It's free!)
Login
Opinions about an article or post go here.
Opinions about an article or post
We at Game8 thank you for your support.
In order for us to make the best articles possible, share your corrections, opinions, and thoughts about "Legendary Seliph Builds and Best IVs" with us!
When reporting a problem, please be as specific as possible in providing details such as what conditions the problem occurred under and what kind of effects it had.